Stage races come so quickly one after the other in the calendar at this time of the year that it would be all too easy to get that sense of "If this is Tuesday this must be Belgium" and to not be able to appreciate the qualities of each race. That would be a great shame, expecially for a race so distinctive as the Profile Holland Ladies Tour which consists of 7 stages, running from Tuesday to Sunday this week, exploring the Netherlands from South to North. Because the Profile Tour is about as close as you will find to a perfect stage race for sprinters. Yes there are climbs. But. Yes there is a Queen Stage. But, but, but. Over the entire week there are scarcely 400m of categorised climbs, and when you look at what has been categorised then there’s not going to be a lot that slips past unnoticed. Last year the top three were Marianne Vos, Kirsten Wild and Ina-Yoko Teutenberg. Teutenberg holds the record for most stages won, with eleven, followed by Regina Schleicher with seven. This is a race in which just one nasty, windy day can make any stage into the Queen stage.

It may call itself a Tour, but this year’s race is based around two centres. We begin with two flat stages near Eindhoven, 112km from Nuenen to Gerwen on Tuesday, then 107km starting and ending in Leende on Wednesday. 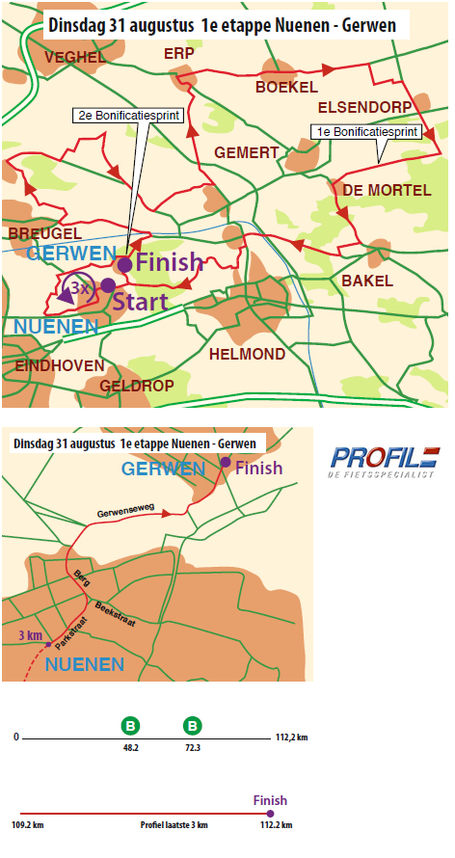 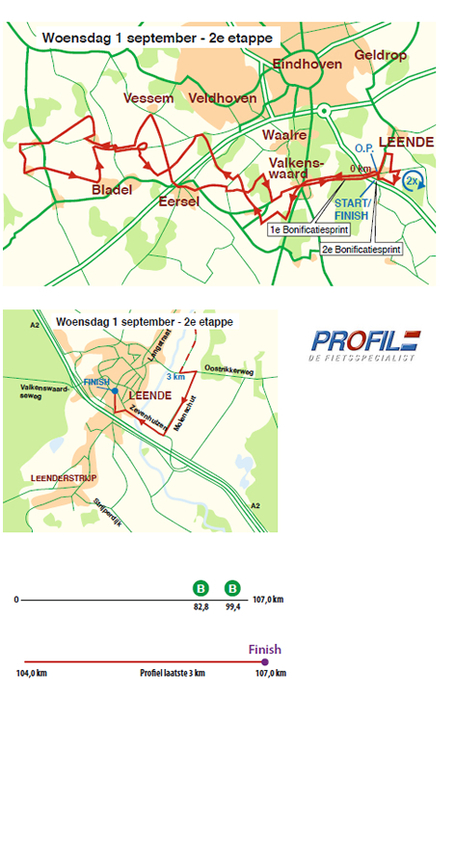 Then we move to Haarle in the North for the rest. Thursday’s stage 3 is 107km around Gieten in the province of Drenthe, and anyone who was with us earlier in the season for the Ronde van Drenthe knows that the highes point in that province is an grass-covered, one-time rubbish dump, and they aren’t going anywhere near that. Stage 4 is five laps of a circuit starting and finishing in Goor, for 97km of racing which once again is pancake flat although the riders will pass some hills on the bus on their way to the startline from the race hotel. 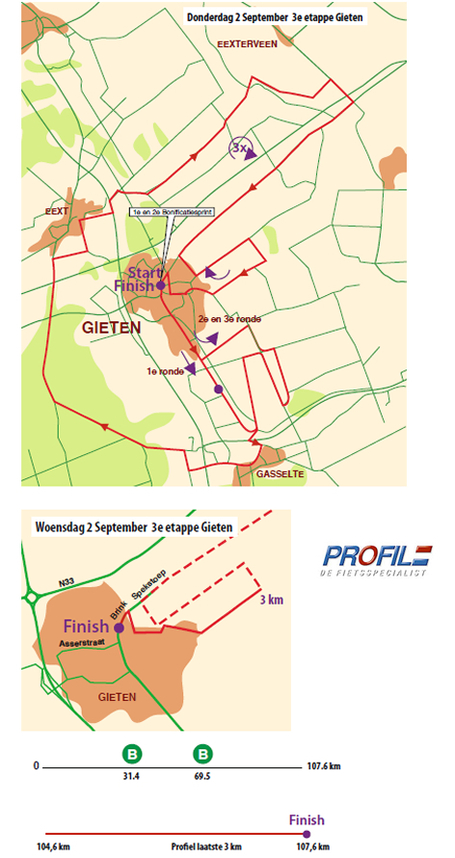 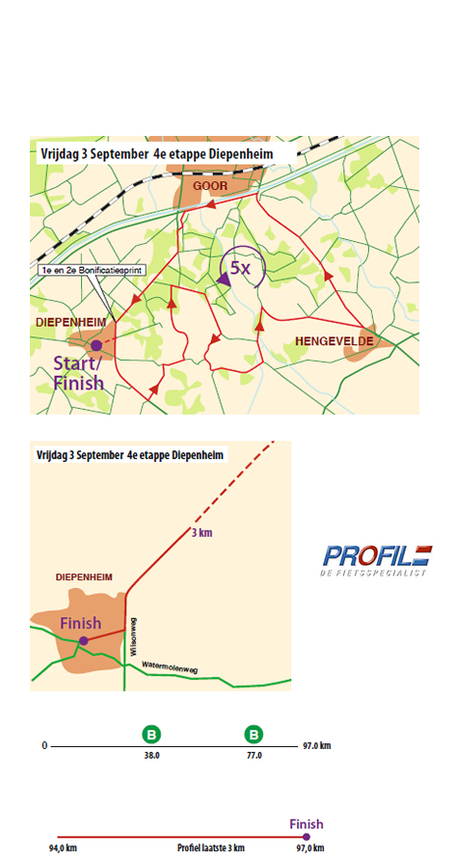 It’s not until stage 5 that we hit the first categorised climbs of the race. Stages 5 and 6 use the same roads, but they are ridden several times for Saturday morning’s road stage of 80km, then just once for the afternoon’s 15.6km time trial. See those little yellow markers on the profile below marking the categorised climbs. Well actually it’s the same one every time, and because it also comes within the last 3km, the organisers have been kind enough to tell us the altitude gain. It’s a whole 12m. Now I’ve plotted that last 3km out on bikely.com to see if there was any mistake (click on "show" at the top left, then "elevation profile"), and while it’s technically true to say that the road there is a bit nastier than that, I would be surprised if this was a categorised climb anywhere else in the world. Still, it gives a big hint as to how flat the preceding stages will have been. 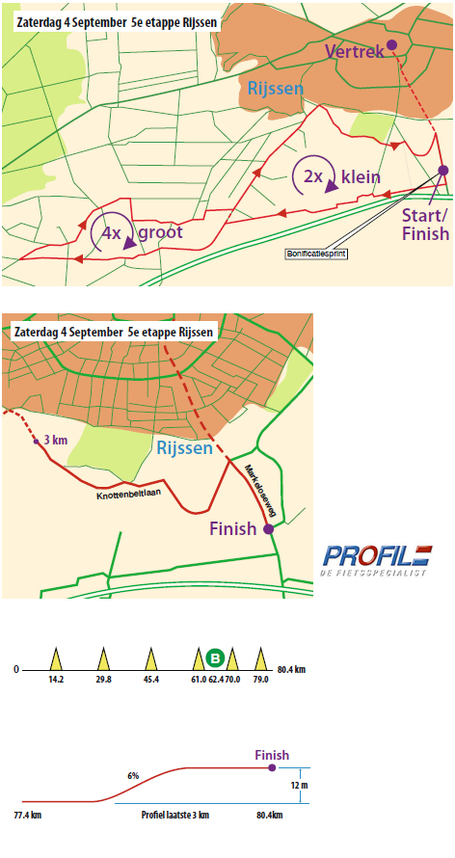 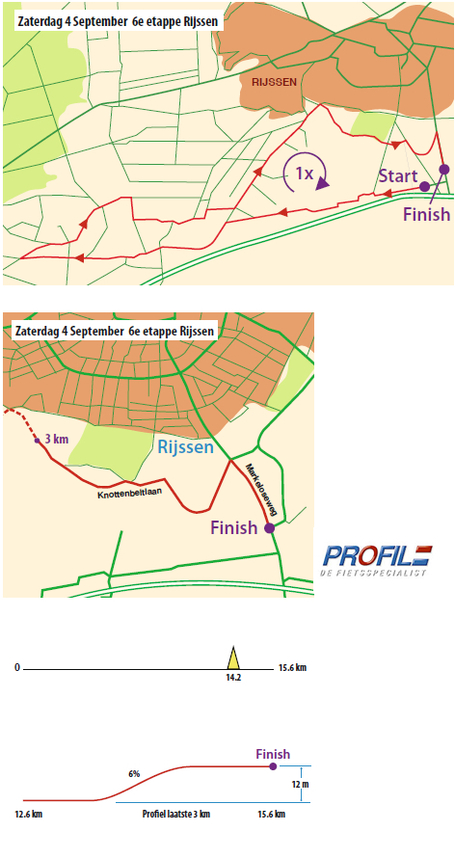 Assuming that the wind hasn’t been a factor, Stage 7 on Sunday will be decisive. This is another circuit race, 121km starting and finishing in Hellendoorn, but including three long laps out through the Holterberg National Park, complete with categorised climbs at Motieweg and Nijverdalsebergweg. These are a bit tougher, but still just over 50m high each, the road looks to be wider than you might expect, and given that the race crosses here for the last time almost 50km from the finish line I doubt is the sprinters will be worrying too much.

This race is listed as 2.2 on the UCI calendar, which makes it open to pretty much anyone who wants to ride it, and given that this in the Netherlands then lots do. There are no less than thirty teams down on the start-list, including the big favourites HTC-Columbia, Cervelo and Nederland Bloeit, German, Swiss, USA, Canadian and Welsh (missing Nicole Cooke, but including others who I hadn’t realised were Welsh) national teams, fourteen teams from the Netherlands (3 of which are mixed, although one of those includes Gauss riders Martine Bras and Giorgia Bronzini), and the British Rapha Condor squad. Names to watch for will be the usual suspects of last years top 3, Vos, Wild and Teutenberg, plus Bronzini, Sara Mustonen, Vera Koedooder, and Shelley Evans.

There’s no sign yet of TV coverage, but Netherlands TV usually come up with something. The organisers have their own Twitter account, and other good sources for speedy results include Manel Lacambra and Ina-Yoko Teutenberg. Otherwise just watch this space.

All stage maps via www.profileladiestour.nl