A Peiper's Tale, by Allan Peiper

Share All sharing options for: A Peiper's Tale, by Allan Peiper 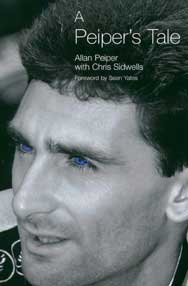 A key member of the eighties Foreign Legion, Allan Peiper's autobiography offers fascinating insight into life as a domestique, and the early days of Peiper's career as a DS with Lotto.

Title: A Peiper's Tale
Author: Allan Peiper (with Chris Sidwells)
Publisher: Mousehold Press
Year: 2005
Pages: 188
Order: HERE
What it is: The autobiography of Australian cyclist Allan Peiper, a key domestique for both Peugeot and Panasonic in the ‘80s and latterly a DS with Lotto and Columbia.
Strengths: An interesting insight into life in the ‘80s peloton and life as a domestique laced with some hot bike-on-bike action.
Weaknesses: Structurally, a bit of a mess, with individual chapters jumping from this subject to that to another and back again all in the space of three or four paragraphs.
Rating: *** (3 out of 5)

"We are a mixed up bunch, us cyclists, not balanced like most people. We run on our egos and hide our frustrations and impressions of life in our actions, A lot of our life is lived in denial, then we stop and the rooster comes home. It's then that we get the bill."
Allan Peiper

What makes a good domestique? Well if Allan Peiper's tale is any guide, a broken family seems to be the key ingredient. Peiper's father was a banker in small-town Australia. Eventually he became a drunk and then a violent drunk. The young Peiper often found himself pulling his father off his mother. The couple separated several times but she always went back. One time, when Peiper was sixteen, he gave his mother a choice: husband or son. She chose her husband. And so Peiper's family gave him the two ingredients that would make a successful domestique out of him. From his father, a well of anger to draw on and drive him on when others would have given up. From his mother, a need to be wanted that would enable him to slaughter himself for the good of his team.

In 1977, when Peiper was seventeen, he and a mate took off for Belgium and based themselves in Ghent where they set about learning how to become cyclists. Peiper was a junior, and one of his regular opponents was Eddy Planckaert, youngest brother of the more famous Willy and Walter. Soon, the races they entered seemed to fall into the same pattern - Peiper and Planckaert beating the peloton and Planckaert beating Peiper. In his first junior season in Belgium, Peiper won one race and finished second thirty-nine times.

Just as he was about to move up to the amateur ranks in ‘79, Peiper took ill. Over-training and a bacterial infection combined and made him give up Belgium and return to Australia. The timing was awful. That Planckaert was going to turn pro was a given. He intended to take Peiper with him, given how well the two worked together. Peiper would have the thick end of two years to mourn his bad luck.

It was '81 before he was back to his winning ways. Then he got a place at ACBB in Paris, the alma mater of so many members of cycling's Foreign Legion. Peiper joined that group of English-speaking pros the next year, in the colours of Peugeot, riding alongside fellow Foreign Legionnaires Stephen Roche, Sean Yates, Phil Anderson and Robert Millar. For the next decade cycling was his life. Key to A Peiper's Tale is the insight into that life it offers us, insight which doesn't come loaded with the same level of ego you find in more recent autobiographies from the likes of Laurent Fignon and Mark Cavendish.

One aspect of life in the pro peloton that intrigues me is friendship. Peiper spent half his pro career riding with Robert Millar. And yet, he tells us, he never really knew him. It's easy to say that that's the kind of guy that Millar was. But it's actually the way a lot of cyclists are: "friendship is a strange thing in the peloton. You will lay your life on the line for a guy because he's in your team, then next year when he's gone you may never speak to him again, ever. You make very few real, lasting friendships." Conversation in the peloton, Peiper tells us, were almost always cycling-related: "That is how self-obsessed you have to be, but I can remember thinking, ‘I'll be glad when I retire so I can have a conversation with some of these guys.'"

What you do have in the peloton is camaraderie. Peiper tells a tale from his final Giro d'Italia, in 1992. Early into a stage he found himself alone in front of the peloton. So he did what he was paid to do - dug in and eked out a gap. He got twelve minutes at one point. Then the peloton pulled him back, catching him at the base of the day's final climb, the Terminillo Pass. Peiper had been in front on his own for two hundred kilometres. Now he had twenty kilometres of climbing ahead of him. As the peloton gobbled him up and spat him out, he tried to settle into the grupetto, but three or four klicks from the summit finish he cracked, mentally and physically. The day's efforts caught up with his legs and his mind had suddenly to face missing the cut-off.

"Then there was a hand on my back and a push. Then another and another [...] even Mario [Cipollini] gave me a push and a word of encouragement. I made it to the finish but only because of the pushes from those men, some of them the same ones who earlier in the day had chased me down with such spite to end my escape." Call me a tragic romantic if you want but it's stories like that that keep me coming back to this sport.

Domestiques like Peiper are probably the least understood riders in the peloton. Peiper's tale goes someway to rectifying that, giving us a glimpse of what keeps the peloton's foot-soldiers going and how they find their own reward. This is perhaps best illustrated by a tale he tells from the 1988 Tirreno-Adriatico (Peiper recalls it as being the last stage, but it was actually nearer the middle of the race - so much for editors who fact check.). Peiper was riding for Panasonic at this stage and Eric Vanderaerden was Panasonic's guy. If you've forgotten the name, or never heard it, there's a famous Tour stage finish, Vanderaerden versus Kelly, which makes Mark Renshaw's headbutt into Bourg-lès-Valances seem like handbags. Vanderaerden was nails.

Peiper's story covers the last twenty klicks of the stage. The race profile shows them to be a flat run-in to the finish, the perfect set-up for the sprinters. The perfect set-up for Vanderaerden. "But around that area of the Adriatic coast there are no flat roads." On one unmapped climb, the peloton explodes into little groups. Peiper lays down his body to get Vanderaerden to the front group, over other unmappped climbs and into the final kilo. Whatever Vanderaerden tells him to do, he does it. He closes gaps. He shelters him from the wind. He pushes the pace on the front. Between the two of them, Vanderaerden is placed fair for the sprint, and wins the stage.

And then Peiper gets his reward: "I coasted in behind them from six hundred metres out, but as I crossed the line Giueseppe Saronni was just in front of me, and he turned and nodded his approval at me." Saronni was one of Peiper's idols. In his first Milan-San Remo he rode behind Saronni for a hundred kilometres, totally mesmerised. "For a guy like him, for one of the greats, to acknowledge with a nod the work I'd done says more than words could ever do." For Peiper, that moment was more gratifying than anything he ever won himself.

Given the era he rode in, Peiper was at the sharp end of doping, a subject he is non-judgemental about. He frequently offers the excuse that the problem is two-fold: first, drugs have always been part of the sport; second, there is so much pressure on riders that it's inevitable that they dope. Of his own experience with doping he says "I tried to ride clean, most of the time."

Of the times that he didn't ride clean he talks of dosing up on amphetamines a couple of times, in Chaudieres, races where there were no controls. Mostly he avoided amphetamines though, fearing addiction. He talks of being given testosterone by a Peugeot team doctor: "I think that dose made me so strong that my own muscles actually tore the tendon [in my knee]." Curiously he never mentions cortisone. He does talk of a Dr Janssen - presumably Eugène Janssen, of the PDM Intralipid affair - who worked with Panasonic and believed in hormone rebalancing, which Peiper seems to think is fair dinkum.

There's a lot of other stuff which, if you remember the era or want to understand the history of this sport, is worth the effort of reading the book to get. Things like the peloton's class system or the double-dealing that can go on when a rider sells a race or even the bullying ways of directeurs sportif like Peter Post. In Peiper's final year with Panasonic, when it was obvious that he would be leaving, Post tried to make sure that Peiper accumulated as few FICP points as possible, in order to reduce his value to another team. But to get to that you have to put up with a book that really needed a stronger editorial hand.

Structurally, the book is - sadly - a mess, jumping around all over the place willy-nilly. That individual chapters don't always run chronologically I have no problem with. Linear story-telling is so passé. But within individual chapters you can find Peiper jumping from this to that to something else all in the space of a few paragraphs and it's just too easy to get totally lost. The lack of a strong editorial hand also leads to a lot of repetition. Peiper's post-cycling spiritual quest is forever cropping up but really deserves a chapter to itself, which it doesn't get. So the reader gets the worst of both worlds: a subject that isn't fully explored in its own right but is forever interrupting other stories.

The other weakness the book suffers from is one of poor timing. Around the same time Peiper started the book - late 2004 - he also secured work as a DS with Lotto, his first such role. Those DS experiences pepper the book. But how much can he know after only six months? Maybe that's not a fair criticism of the book, but you do come away wishing that maybe everything had been put on hold for a year or two to see how that chapter of the story would develop. But those few months of DS experience do bring the story up to the modern peloton and riders of a more recent vintage than the likes of Rudy Dhaenens. Riders like Cadel Evans who, you feel, Peiper understands more than most.

Maybe one day Peiper will update his tale to cover his DS days. That could be a story everyone would want to read, not just '80s fans and history buffs.