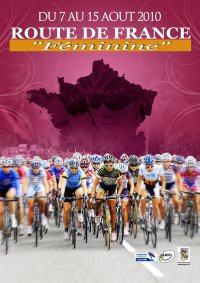 The summer stage racing season continues into France for the Route de France, which following the end of the Grande Boucle is the nearest equivalent to a women’s Tour de France, in the sense of a stage race that has a new route every year. It’s very much a Northern France race, so instead of the clockwise/anti-clockwise variation of the Tour, it tends to go from a horizontal to a vertical race. Last year’s race was a vertical one, won by Kim Anderson of HTC-Columbia after a very peculiar 150km+ stage where she and Evelyn Stevens gained almost half an hour on the main peloton. This year’s race is therefore a horizontal one, seven stages running from Lanvollon in Brittany in the West of France to Vittel in Vosges in the East, complete with some very long transfers on the way. Kim has returned to defend her title (and enjoy pinning the number 1 to her race jersey), but surely she won’t be allowed to get away like she did last year. Carry on overleaf (Oooer Missus) for a closer look at the stages and who’s out to stop her.

We start with two stages in Brittany, a small consolation perhaps for the loss of the Tour of Brittany. Stage 1 is a short individual timetrial from Lanvollon to Plouha, at 5.9km just a shade too long to be called a prologue. Plouha is on the coast, while Lanvollon is directly inland from it, and the course follows a straight line between the two. There might be a headwind to stir things up, but over such a short distance I wouldn’t be surprised to see Ina-Yoko Teutenberg win as she did in the Giro Donne. That is followed by the first proper road stage, 116km from nearby Guincamp to Locmine.

Then follows a long transfer towards the city of Le Mans and 129km of racing between Saint Fort and Lavare, then another transfer for Stage 3, a twisty route of 115km between Bonneval and Cloyes sur la Loire, skirting round the town of Chateaudun. Then its back in the bus with a brief stop off in Auxerre for Thursday’s stage 5, a 24.3km individual timetrial starting and finishing in St Georges sur Baulche just to the west of the town, before continuing to Luxeuil Les Bains for the final two stages, Friday’s stage 6, 111km to Saint Die des Vosges, and Saturday’s stage 7, 119km thence to Vittel, which are the only two stages of the week’s race that don’t involve a long transfer.

That’s 620km of racing, and without, if we believe the maps posted by the organisers, a single categorised climb. And not only do the maps not mark out hills, but the organisers have not posted profiles for the stages, nor do they even have a climber’s jersey. Actually, and in a look back to the old fashioned days when balls were leather, bikes steel with solid tyres, and Henri Desgranges hoped that only one rider would finish, they only have two jerseys on offer, the orange race leader’s one, and white for the best young rider. None of this "a jersey for everyone" that we see in the podium ceremony for other races, here there is a winner and there is everyone else.

So who is in the hunt for that orange jersey? Well unsurprisingly most of the climbers are staying away this week. Kim Anderson may have that number 1 on her jersey, but with Ina-Yoko Teutenberg and Chloe Hosking on her team she won’t be HTC-Columbia’s protected rider. And as Cervelo aren’t bringing Kirsten Wild, but looking to Charlotte Becker, Sarah Duester and Lizzie Armitstead to contest the sprints, that makes Teutenberg the number one favourite by a long way. Heading the race for second step on the podium are Gerogia Bronzini of Gauss, a late entry from Marianne Vos and her Nederland Bloeit team, Rasa Leleivyte of Safi-Pasta Zara (seemingly supported by Safi’s best climbing team) and Kirsty Broun on the Australian National squad. And an interesting name to watch out for, though perhaps more as a contender for the young rider’s jersey, is Cherise Taylor riding for the South African MTN team after Nashua blew its budget in the first half of the year and vanished.

Finding video coverage of this one is going to be tough. The organisers have posted links to snippets from previous years, but as the route crosses several France 3 regions there is no one obvious place to look. No team USA either, nor Lotto, so none of our best Twitterers. I guess that some of the South Africans might be the best chance. MTN team owner Doug Ryder is down on the official startlist as being the DS for the week, but he’s not yet sent out any "France at last" type messages, so I doubt that he’s driving the team car himself. Otherwise it’s a question of wait and see. Still, something has turned up for every other race so far this year.