Share All sharing options for: Roundup Up North: Oranje Drama 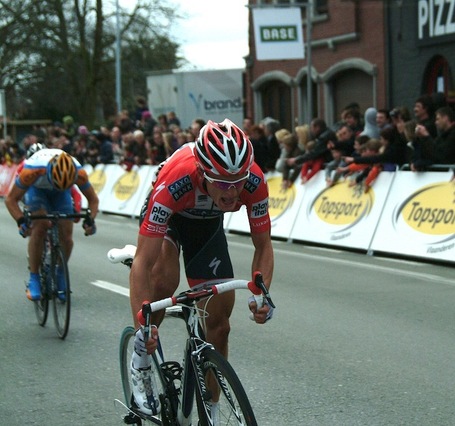 As the cycling world heads back into classics mode (and this editor goes on vacation), there are a slew of notes of interest which I'm desperately trying to cobble together into a single, coherent narrative. And the one common thread is an orange one.

First, the big "news" of late are a few official transfers. Today Matti Breschel confirmed what people have been kinda sorta saying for a bit -- that he's going to Rabobank for next season. This rates as one of the bigger transfer stories, along with Stijn Devolder's move to Vacansoleil, as the top lieutenants (and occasional internal competitors) to the two biggest names in the classics have moved to Dutch squads where they can enjoy greater autonomy in 2011. In Devolder's case it's clear he'll be the lead driver, but Breschel's move is a bit more complex, and much more interesting. Rabobank remain a headless horde of immense young talent in the classics, plenty of potential but nobody to lead. Eventually they expect Lars Boom to ascend to that top spot, but the next season or two may be a bit soon. And in the meantime Sebastian Langeveld has only occasionally threatened the top guys.

Breschel can do more than just threaten. OK, last year he raced for an unstoppable teammate in Fabian Cancellara, but until the Swiss Bear showed his cards it was thought that Breschel was the man to beat in de Ronde. The Danish Champion was on ripping form, and packs enough of a sprint to threaten Boonen in a two-up finale, though a seemingly endless series of mechanical failures brought Breschel to the point of a nervous breakdown, and left him with little to show for his season besides an emphatic win in Dwars door Vlaanderen. In particular Breschel looked dominant in Gent-Wevelgem until a flat tire eliminated him from the first group. Rabo mechanics might not be sleeping soundly at the news -- Breschel raged at the Saxo folks and showed off a temper that bears watching -- but otherwise having a top contender in front of the growing Boom and the less certain Langeveld should make Rabobank a player again on the cobbles. Nick Nuyens was supposed to play that role the last two seasons but Nuyens was inconsistent and is likely to be moving on.

Bauke Mollema, another Rabobanker, scored a nice result in Poland, taking a stage and third overall, but at a cost -- he came home with a broken collarbone after a crash on the final stage. The young climber wasn't hurt badly enough to stop, which is a good thing for Dutch Cycling right now: his third overall provided much-needed UCI points to the Netherlands in the race to crack the top ten (and get the maximum nine riders for the world championships). The Netherlands sits tenth now with one event to go before the invites are sent out: the Vattenfalls Classic. Eleventh is Germany, 30 points back, but the Germans could clean up at the event with Andre Greipel and Gerald Ciolek, among others, racing in the biggest home-soil event of the year. So to be assured of advancing the Netherlands needs six points to pass Luxembourg, which is a two-man worlds team at this point and will be idle this weekend.

Perhaps the Netherlands' best hope is Nikki Terpstra, who just won the Sparkassen Giro with a solo attack. Milram haven't announced their squad yet but Terpstra is running well and gives them a choice to go with Ciolek... but the German Milram squad will be leery of letting a Dutchman upset their applecart, given the worlds standings. Someone of Dutch nationality needs to finish in the top eight to pass Luxembourg, or the German dudes need to miss out. High drama next weekend. Loser sees their worlds team shrink by three (NL, DE) or seven (LUX) riders.

Finally, while Vacansoleil are celebrating Devolder's arrival, their efforts to build a climbers' squad have fallen apart. Not only did Samuel Sanchez spurn their offer to re-up with his only pro team, Euskaltel, but they will also bid adieu to their French climbing hope, Brice Feillu, who suffered homesickness and disappointment at the grand tour non-selections in his lone season up north. Feillu's signature will be a prime target for several French teams, for sure.