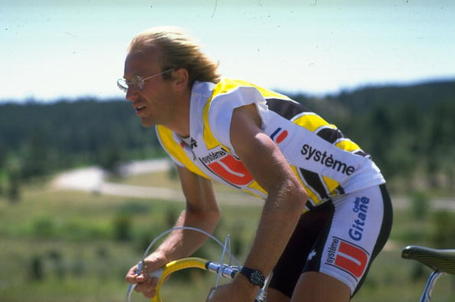 What can you say about Laurent Fignon that hasn't been said dozens of times in the past twenty-four hours? How about this: for a Frenchman - a Parisian to boot - he had horrendous fashion sense.

For sure, the Gandhi-glasses weren't too bad, even John Lennon pulled them off with some panache, and he was a Scouser. And the ponytail, yeah, it's too often seen on the Peter Stringfellows of this world, but, you know, on Fignon, it was kinda ca va. But then there was that sin against fashion - such a mortaler! I weep even thinking about it - that no amount of atonement could ever wash it away: the Renault sweatband. Oh, the horror! I can already see it as the cliff-hanger for the next season of Doctor Who, an army of sweatband wearing robots takes over the Earth, starting in Paris in July. With Laurent Fignon and Bernard Hinault at their head.

You'd think with a black mark like that against your soul, you'd be extra careful in the years left to you, but not Laurent Fignon. He was - to half-inch the title of his autobiography - too young and carefree to give a toss. And so we got the fashion faux pas that was the Castorama kit. Oh! My! God! What the hell drugs were they on when they designed that? This just in: it wasn't the cancer what killed Fignon. He was looking through some old photos, saw that Castorama kit and died of the shame. Someone keep Laurent Brochard away from Google images.

But fashion fades. And the Tour lasts forever. So much has been written about Fignon's Tour triple. The two he won and the one he shoulda won. Especially the one he shoulda won. Sometimes even only the Tour he shoulda won. He burst on the scene young and scorced his way to the top of the peloton and with those back-to-back Tour wins deservedly became un géant de la route when he was barely into long trousers, twenty-three, twenty-four years old. But there was so much more to him than the Tour.

Consider La Flèche Wallonne in '86. Milan-San Remo in '88. Milan-San Remo again in '89. The GP des Nations in '89. The Giro d'Italia in '89. The Critérium International in '90. Hell, one day I may even forgive him for being the guy who finally toppled Sean Kelly from the FICP rankings. One day. Maybe. The point about them palmarès is to show that - despite what you might think reading some of the obits - he wasn't just a rider for the Tour, and he wasn't just a star in '83, '84 and '89. He really was one of the stars of the eighties.

But one of the downsides of winning so big so young is that the years that followed those first two Tours had a Proustian sadness to em, Fignon seemed to be searching for the temps perdu. Especially if Phil 'n' Paul were to be believed each July. For them, he just kept on coming up short. Even when he was winning Tour stages again he didn't always get the credit he deserved.

Take '87. A lean year. A couple of stages in Paris-Nice. A stage in the Vuelta a España. And a stage in the Tour. The wrong stage. La Plagne. The day Pedro Delgado timed his attack wrong, as he was wont to do. The day Stephen Roche timed his response perfectly. The day Ligget nearly wet himself with his infamous 'It's Roche! It's Stephen Roche!' hysterics when he saw the Dubliner come riding round the final corner. And there all this time was poor ol' Laurent Fignon. Stage-winner. Forgotten in the media-scrum and the medics around Roche. Glory stolen from him. Ho hum. Talk about foreshadowing.

The media never really did get Fignon. Even in death they're still not getting him. Some are still giving him the prix citron. Take Sam Abt, who has two pieces in the NYT, a full obit - whose title I think would have brought a smile even to Fignon's lips: 'Laurent Fignon, Gruff French Cyclist, Dies at 50' - and a shorter piece which puts the bitch into obituary. I like Abt, a lot, and would have preferred if he coulda said somethng more gracious, but in a way what he said was right: "At his best, Fignon could be willful, even arrogant [...] At his worst, Fignon could be selfish and even cruel." There's no point in re-painting the past a rosey-coloured hue just cause the guy's dead, now is there? In the eighties Fignon could be downright dislikable. Which, in a twisted sort of way, was one of the most likable things about him.

Maybe looking for Laurent Fignon in the obits is the wrong thing to do. Don't waste your time reading things like this. Get yourself some viddies from the eighties and watch them instead. That's where you'll really find him. On his bike. Cool. Classy. Winning. Losing. But always fighting. Always attacking. Not sitting back and waiting for Hinault or LeMond or whoever to make a mistake. Taking the fight to the enemy. Old school racing tactics. Not always clever. But rarely ever dull.

And if the viddies aren't enough and you want to find out more, treat yourself. Read his autobiography. I'm often wrong about a lot of things where this sport is concerned, but on this I'll bet the house: you won't be disappointed.