Share All sharing options for: ANTON CRASHES OUT; RODRIGUEZ WINS; NIBALI INTO RED 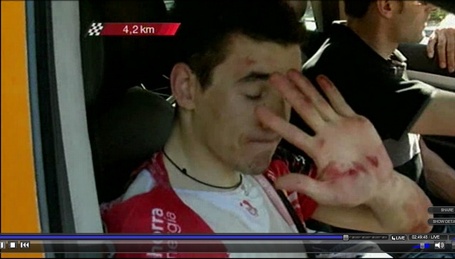 The Vuelta a Espana took several sudden dramatic turns today as leader Igor Anton of Euskaltel crashed suddenly in an apparent touch of wheels or a slip on road paint shortly before the day's final climb, abandoning the race with an apparent arm injury along with teammate Egoi Martinez and Caisse d'Epargne contender Marzio Bruseghin. With Anton out, the wide-open race for red turned into an all-out war on the nasty slopes to Peña Carbaga. Zeke Mosquera opened the action with what's becoming his trademark early acceleration. Liquigas' Vincenzo Nibali countered a minute later, gapping the contenders until Joaquim Rodriguez of Katusha hit the gas and caught the Sicilian, dropping him in the last km for the stage win and the 20 second time bonus. Nibali held on for second and his 12" bonus, which was just barely enough to put him in the overall lead for the day. Mosquera recovered for third, putting him squarely in contention for the overall.

Now the Vuelta is at least a three-man race in the short term, with several other realistic contenders dreaming of red in Madrid. All thanks to an errant wheel or a slippery paint strip or whatever it was that shattered Basque hearts -- and a lot of ours too -- today. Stage:

And the General Classification: