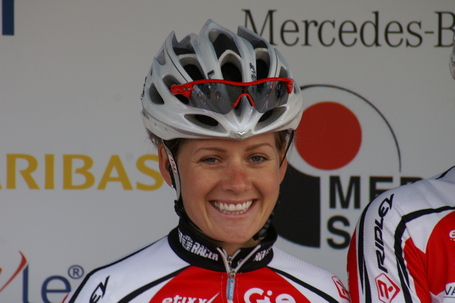 Emma J will leave Red Sun at the end of this season and ride for the Norwegian team HiTec Products UCK next season. The team will also gain a new sports director as Martin Vestby has signed on to manage the team. It's not completely clear what this move means for Johansson's current team Red Sun, which was very much built around her. With Red Sun, Emma J won the Omloop het Neiuwsblad this year and the overall at the Trophée d'Or Féminine. Look for her to start the upcoming World Championship road race as a fave for the win.

Emma Johansson, olympic silver medalist 2008, no 4 on the UCI world ranking and No 2 in the world cup 2010, will ride for Norwegian UCI team 'Hitec Products UCK' in 2011. By this we will be ready to fight against the best women teams in the world. At the same time, former Pro cyclist Martin Vestby switch from Norwegian national coach for U23 men, to Sports Director for team Hitec.