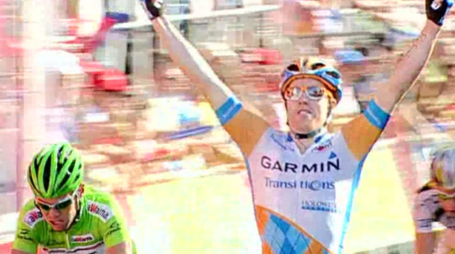 Tyler Farrar emerged along the left barriers in the final stretch of the 2010 Vuelta a Espana to thunder home ahead of Mark Cavendish, nabbing a powerful stage win to close out the grand tour season. Cavendish hangs on to his green jersey, the first of his incredible career, and well deserved it was. But as the sprinters head to Australia in hopes of a bunch finish at the World Championships, Farrar has a reason to feel confident of his chances, even with Cavendish in the crowd.

Vincenzo Nibali, meanwhile, cemented his overall victory with a tranquil ride around beautiful Madrid, becoming (I think) the first Sicilian to ever win a grand tour. More on this later. Stage results: