World Championships: Whose Kind of Course Is It?

Share All sharing options for: World Championships: Whose Kind of Course Is It?

I know we can't settle the argument once and for all as to whether the Geelong World Championship course is for sprinters or not; only the racers can do that, and will, in eleven days' time. But after occasional forays into the subject over the past few months, let's take a close-up look at the parcours and, well, at least pretend we've figured it out.

Some grafix, a bit more breakdown, and video! on the flip: 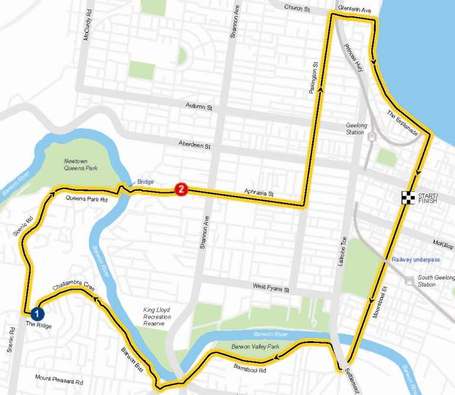 The little blue 1 is the Ridge, and the red 2 is Aphrasia Street. For what it's worth, here's the profile (click for a larger version):

The Ridge is covered over at Climbbybike.com, which has this to offer:

Those gradients, nearly all between 10-13%, are gonna hurt, after a while anyway. In the McEwen video down below he spots an instant reading on his computer of 22% at the top of the Ridge. Everyone is going to feel that ramp.

Meanwhile over at Aphrasia Street, there are no fancy grafix that I can find, but the road rises 50-60 meters in the span of 400 horizontal meters. That's a shortish ramp with an average of between 12-15%.

Lacking a perfect comparison, the best we can do may be Amstel Gold, without the Cauberg finish. With a descent and some flats covering the final 6km of the race, any small advantage gained on the final climb won't necessarily last. All day long guys will be slowly spit out the back, but up front the attacks will be brief, when they happen at all (e.g., last 3-5 laps). The key to victory will resemble that of the Tour of Flanders or Amstel Gold: being able to get a small gap on the climb and make it stick over the top, back down the other side.

Another comparison perhaps worth making is the conclusion of Milano-Sanremo. The Poggio certainly sorts out the climbers on the way up, but with a steep technical descent back down, the riders tend to come back together, particularly once they hit the wide boulevard. In Flanders, by comparison, ascents like the Koppenberg top out on a plateau, and with the benefit of a crosswind a strong guy with a gap can drop the hammer on top and really get away. I am not so sure that's the case coming off the Ridge or the second climb.

Watch Robbie McEwen ride you through the circuit:

McEwen says it: the action coming off the climbs will encourage regrouping. The guys who lose out will be the ones who are broken by the length and number of climbs, more than any single ascent. The winner will not be any particular style of rider, but he will be a beast. Which means predicting the winner will have to do more with who's on form and generally a strong guy than who can climb. Even the sprint will be a hardman's event, with a slight uphill grade.

Without saying who I like (besides Gilbert), I'll say for now that this is a great course selection. World championships don't swing to the extremes of climbyness or sprintyhood very often, but the last two years were at least thought to favor the grand tour climber set and Ardennes guys. This course brings back into play the hardman sprinters (if not the short-range bunch gallopers); the spring classicians; the Ardennes guys who can finish; anyone who can get up and down 260km with something left in the tank. With the Italian season to follow for the pure climbers, every kind of top cyclist has a reason to stay engaged, all the way to the finish of this amazing season.