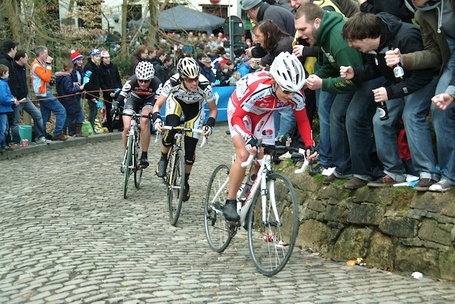 For the last few years at the Café Chris has been fooled into developing a rider ranking system under the pretence that it is really a game. Now with most of the legwork already done, I decided to take the basic principles and apply them to this season’s womens races in order to come up with a first draft ranking of that peloton. I say first draft because there are an awful lot of subjective judgements involved in selecting and ranking the races that are going to count, and I’m fully open to suggestions on where you think that my judgement may be a little clouded/ should have put on its glasses/ was smoking something peculiarly aromatic, etc. I’ve broken down the analysis into a couple of parts, one-day races and stage races, so of course there will be a third part to add them together, just because I’ve got the numbers to play around with. Anyway, according to the races I chose to score here are the top 10 riders on the one-day circuit this year:

So there’s no need to send Marianne Vos off to take over the UCI because Emma J has beaten her pretty comprehensively this year anyway. I’m not sure I’d totally believe that myself, but I think that the main factor has been the rise of Annemiek Van Vleuten this season, and the fact that Vos has been more than happy to play the loyal teammate. Just about everyone else at the top of that table is the sole leader of their team. Emma J undoubtedly so at Red Sun, Grace Verbeke ditto in the Northern one day races even if she’s hardly been seen South of the Alps, and it’s an odd day if Kirsten Wild and Emma Pooley both line up for Cervelo. Carry on overleaf for more listings and a bit of explanation how I worked it all out.

That’s 11-20. Ina-Yoko Teutenberg comes in so low partly because she wins races that I haven’t scored, and partly because she only seems to enter if she’s got a good chance of winning. Compare that to the way Kirsten Wild struggled her way to lower placings in hilly Dutch races for the sake of getting points towards the season-long competition. And we may not have seen much of Nicole Cooke, but she’s done pretty well whenever she’s had the chance.

Finally here are positions 21-30, just to show how just a few riders get most of the wins, and to give an idea of some of the problems involved in weighting a womens VDS game.. In the mens VDS right now the top riders are Tyler Farrar and Joaquim Rodriguez with 2000 points apiece; three women have already cracked that ceiling before we even start to score stage races.

Anyway, how was it all scored? I’ve used exactly the same categories and points valuesas we use on the men’s game. In the place of the Monuments and Worlds category, I’ve put World Cup races and the Worlds, where the first 20 across the line score points from 350 for 1st place right down to 5 for 20th place. There may be a case for moving some races in or out of this category, but by and large these ones get the best quality fields. The only oddity is the Vargarda TTT where our rules mean that just about everyone scores something


The next one day category is group 4, Top Classics, where the top 15 score from 250 down to 15 points. I’ve simply put in everything that is a 1.1 race on the UCI calendar, which is a bit crude but everything’s open to debate here. I’m not keen on having three time trials here, especially as they tend to have smallish fields anyway, but the rest seem OK.

Then we come to group 5, Other Classics, where the top 10 score from 150 down to 10 points. Again I’ve just taken all the other races on the UCI calendar, i.e. the category 1.2s.

Finally comes group 6, minor races, and I’ve scored here all the main races on the French, Belgian and Italian domestic calendars. For Belgium that meant the Wielertrofee Vlaanderevn series, for France the French Cup which I’ve not mentioned at all this year so probably deserves a bit of attention next year, and for Italy all the races rated 1.15 on the domestic calendar. I was planning to do something similar for Dutch races, but all the races in the Top Competitie series are already on the UCI international calendar. Perhaps there’s room for including some domestic US races, but I’ve not yet looked in to it. Only five riders score in each race, so giving 100 points for a win may give a boost to some riders who don’t do so well when the more serious competition turns up, but then again maybe we need more races where Vos isn’t present.

The complete file can be downloaded here (xls file). I’ll put up a similar post for the stage races in a couple of days and then a grand total one soon after that. Any thoughts or sugggestions for improvement would be welcome.