Why is it that even as long-standing races vanish from the calendar, the Italians are able to come up with such great replacements, none more spectacular than tomorrow's opening edition of the Eroica Rosa run over those same gravel roads around Siena that you might just remember from the stage into Montalcino in this year's Giro. And this race doesn't need the rain to make it - it was just as spectacular when the first edition of the men's race was run in the autumn light back in 2007.

Somehow you just know that L'Eroica was started by the sort of men who would otherwise spend the winter sculpting their beards. L' Associazione Parco Ciclistico del Chianti, a local cycling club, began the race back in 1997 as an attempt to persuade the authorities that gravel roads were part of Italy's heritage and worthy of preservation as Roman statues and Florentine palaces. To highlight this they put on an amateur randonnee celebrating that heritage. Entry was restricted to those riding vintage bikes, and all competitors were encouraged to turn up in clothing suitable to the era, even if it was reproduction (50 year old wool is probably not something you want to spend the day wearing). That was a huge success and a few years later the regional council even signposted routes of differing lengths in a bid to encourage tourism. RCS started a pro version in 2007, at first run in conjunction with the Eroica festival but now moved to the spring, last year an U23 event was added, and this sees the first running of the women's race.

The race itself is 117.6km long, starting and ending in Gaiole in Chianti (not yet in Siena itself), including 40km of gravel roads in six sections concentrated towards the end. But look at that profile and note how little flat road there is; no massive climbs but a lot of up and down. 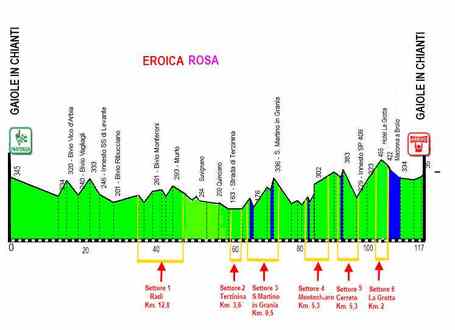 I've not yet found a start-list, only the entries for a few teams (remember that this is on the domestic Italian calendar, not that of the UCI, and that an awful lot of the peloton are right now in Australia). Vaiano are sending seven riders, Irene Falorni, Simona Frapporti, Corinna Mari, Simona Martini, Eleonora Spaliviero, Francesca Tognali and Chiara Vanni, Top Girls Fassa Bortolo six, Valentina Bastianelli, Sigrid Corneo, Alessandra D'Ettorre, Jennifer Fiori, Gloria Presti and Silvia Valsecchi, Valdarno five, Giulia Bonetti, Chiara Bortolus, Laura Bozzolo, Martina Corazza and Evgenya Vysotska, and Fenixs just four, but the strongest looking team, Svetlana Bubnenkova, Marta Bastianelli, Suzie and Trixy Godart. I hope some video comes out, but I've not seen anything scheduled yet. Again we wait and hope.