Worlds Spotlight: Fabian Cancellara and the Jump to Hyperspace

Share All sharing options for: Worlds Spotlight: Fabian Cancellara and the Jump to Hyperspace 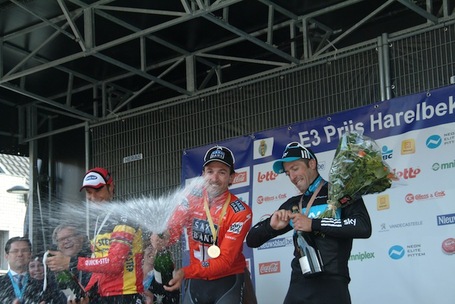 Sunday night I did my biweekly Bike Talk Radio segment, which you can hear here, and in the interest of giving listeners something to chew on for the Men's Elite Worlds Road Race, I unfolded a scenario where I think Fabian Cancellara can win.

Now, mind you, everyone has their winning scenario. Mark Cavendish's scenario plays out where he hangs on through all the climbs and blitzes the front of the field in the last 200 meters. Cadel Evans can picture crushing some heads up the last climb and winning from a small group of the sprint-impaired. The Malaysian team is imagining an elaborate series of untimely flats in the peloton. And so forth.

One scenario that I personally have been chewing on is what happens if Fabian Cancellara is near the front of the field as the peloton crests the Ridge on the last lap. Cancellara told the Australian press that he's an outsider for the road race and plans to focus at least equally on the time trial, which when you apply the Standard Cyclist Sandbag Autotranslator (SCSA) means that he feels great and is planning an all-out assault on the road race. Few riders can stay with Cancellara when he launches an attack, for a variety of reasons. First, he can unleash 30-second (or so) power bursts that defy the imagination. Secondly, he can increase the pressure on the chasers with his deft bike-handling, which he used to distance Tom Boonen and Juan Antonio Flecha in the E3 Prijs Vlaanderen by cutting a corner past some road furniture while attacking, and the resulting gap held to the end, even with Boonen taking the bit between his teeth for the chase. And lastly, the guy is a bombing descender. Remember Beijing?

What makes Cancellara so unique is that his attacks are unusually hard to answer. His power bursts are so strong and sustained that it takes pretty much all the energy another rider has to even hope to chase him down. Maybe if you're fast enough you can catch him with about 400 meters of sprinting. Where does that leave you? Cancellara isn't the only guy who can zip through a tricky corner or descent, but those skills will gain him a few meters and then he makes the jump to hyperspace... and you've got big trouble.

All of which points to a potentially unanswerable attack as early as the last descent of the Ridge or as late as coming off the final climb. If there has been a good deal of negative racing up to that point, he could punish them swiftly and severely. The dilemma is that my pick to win, Philippe Gilbert, will have the ability to weaken Cancellara on the climbs, especially the Ridge, where a full KM of nasty climbing won't suit Cancellara. Force him to dig deep then and he won't have as much of his trademark power to draw on. But Gilbert will be looking at other riders too and wondering if he should be spending his energy beating up just one guy. A lot will depend on the makeup of the finale and whether an uphill attack will hurt everyone. Gilbert's ace in the hole is the final 200 meters, which are perfect for him (barring a Cavendish or Farrar sighting, and maybe even then too). He's not going to beat up Cancellara with accelerations if Matti Breschel is getting an armchair ride from Phil in the process.

So much intrigue. Got a scenario to offer? At this point there are no wrong answers, since the race could go a million different ways.