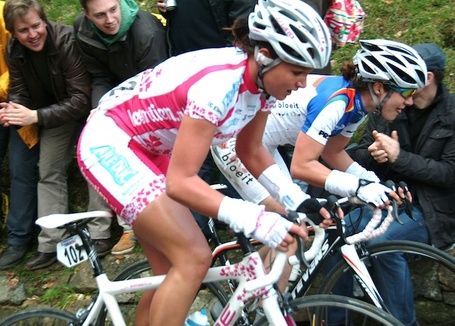 It was a bit of a surprise to see that Marianne Vos wasn’t in first place in the rankings I drew up for one day races, but when we look at what went on in the stage races then the natural order of thigs re-asserts itself. If you think that you’ve found a little bit of ground that isn’t Vos territory then the chances are that is only because she was winning somewhere else at the time. Here’s the top ten:


You were probably expecting to see Emma Pooley up there, Judith Arndt has had a solid season too, Mara Abbott had some big results even if she didn’t race much in Europe, and sprinters can always rack up the points, especially in the short flat stage races where they have a good crack at getting on the podium proper. But Marianne Vos’ secret is in that fourth column which represents the number of "races" in which she scored pseudo-VDS points (by "races" I mean either individual stages or the overall GC, both of which count as a race for this crude measurement). She may only occasionally beat Ina-Yoko Teutenberg and Kirsten Wild on the flat sprints, but she’s always there in the mix; she won’t get to the top of the Stelvio berfore Mara Abbott and Emma Pooley, but she was in the top 10 of every single stage at the Giro. And more worryingly for those latter two is that she plans in a year or two to centre her season around one of the big Tours. The only good news for anyone feeling a bit intimidated is that she’s not eligible for the young rider’s jersey any more.

If it wasn’t for that super dominant performance by Vos the scores would decay gently as they do on the mens’ VDS. There aren’t any huge gaps here but if you’ve been following the season you will see that the top ten is mostly made up of those who scored in the big races, while in places 11-20 are the women who did well in the smaller races.

Then when you get down to the riders below that you start to enter worker bee territory, women who have been in numerous breaks over the course of the season, but who finally manage once or twice to make that break stick, maybe even getting the race leader’s jersey at the same time. Olga Zabelinskaya has been the revelation of the season and might have finished higher up were it not for a crash while training, Eleonora Patuzzo is at last finding her feet in the senior peloton, Noemi Cantele can be relied on to be in good form in September, while Grace Verbeke for some reason has not been riding the big races and is looking for a new team for next season. If you want to see how things look further down then here is the full spreadsheet.

Now for the selection of races. The first category, Grand Tours was easy to select. There are two big ten-day races on the calendar, the Tour de l’Aude and the Giro Donne and that’s it. The first five in every stage score from 80 down to 10, then at the end of the race the top 20 in the GC score from 600 down to 15 points.

Below that it was a bit more awkward. The UCI recognises two categories of stage race: 2.1 and 2.2, 2.1 includes both l’Aude and the Giro plus these races:

but I suspect that some of the 2.2. races choose to be so to make it easier to invite local teams. After a good few minutes of indecision I decided to put them all into category 3, Top Stage Races, meaning that the top three on any stage score points, and then the top 10 in the GC, going from 250 down to 10. The only race that I felt definitely should be put in a lower category was the Tour Feminin - O cenu Ceskeho Svycarska which runs at the same time as the Giro Donne, but it felt mean to leave it all alone at the bottom so I didn’t. Surprisingly, every other race has a clear spot on the calendar. Dropping Gracia – Orlova and the Holland Ladies Tour might however be a good way of cutting Vos back just a tiny bit. If you've got any other suggestions on how to do so (and not the Tonya Harding sort) then let me know.