WC Elite Men's Time Trial: Who's Got the Cure for Cance?

Share All sharing options for: WC Elite Men's Time Trial: Who's Got the Cure for Cance? 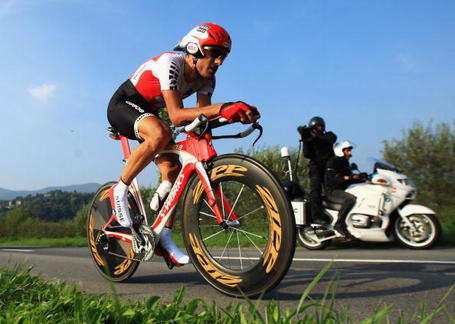 We all know who the number one favorite for today's race is, and a preview of Fabian Cancellara's hopes of a possible rainbow jersey, which has been more or less tattooed on his back since my second kid was born, would be beyond merely dull. So let's turn the page directly to the subject of, who can stop the guy?

Which leads me to CQRanking.com. How do I love thee? Well, one way is by accessign your DIY subranking feature, which in about two clicks gets you a worldwide points ranking based solely on time trials. Year by year. The top two are of course Cancellara and Tony Martin, who has bedeviled the world champion most of the season and actually holds the top spot with 297 points to 263 for the Swiss Bear. Raw points are a pretty rough estimate, and the real decisive factor has more to do with who among the top contenders is on fire or loves the course.

But at a minimum CQ can answer one question for us: is this World Championships field the right list of guys for the job? WCs are notoriously self-selecting, particularly the time trial, coming as it does each year a few days before a very demanding road race. This year, of the top eleven crono-point-scorers in the world, eight are on hand, with only Marco Pinotti, Brad Wiggins and Alberto Contador sitting out from that list. Here's a brief rundown, plus a couple bonus items.

Prowess: Four wins and a second place in ITTs of any consequence this year. The "loss" was to Cancellara in stage 19 of the Tour, narrowly, which I suppose you could excuse by citing to his relative youth and what 18 Tour stages can do to young legs. I've excluded prologues from this assessment, but he's not bad at those either.

Form: Apart from cruising aimlessly around Britain, Martin's last serious effort saw him win the Eneco Tour almost by accident, with a long attack in the Vlaamse Ardennen and a time trial win to seal it. A lot of guys got sick in Britain, so hopefully Martin didn't fall prey to whatever bug was going around.

Prowess: You don't actually want me to spell this out, do you?

Form: He's done a lot of soft-pedaling since that Tour ITT win in July, and staged a shadowy exit from the Vuelta to throw us off the scent a bit. Nobody believes him, and he will be in top form like he always is when a priority race comes up. The fact that he finished third in the Vuelta's Penafiel ITT while just messing around is a good sign.

Prowess: Before Martin's uprising, Larsson was the undisputed distant-second-best time triallist in the world. Silver medalist in the last Olympiad and Worlds, he never fails to show up in late September for a strong ride. If anything, four wins this year suggest he's getting better. But he hasn't beaten Martin in three tries this year, excluding the Paris-Nice prologue that neither really contested.

Form: Fourth at Penafiel, in his customary spot behind Cancellara.

Prowess: His reputation in the discipline is testament to the beneficial nature of doping. Yes, he's good at it, but I think we always look for him because of the world title he won, and no amount of confessing seems to erase the sense that he's a top contender for another rainbow. Personally, I like the guy, he's interesting and his cobbles conversion is always a plus. But his ITT wins tend to be short and unremarkable.

Form: Coming off his third grand tour of the year, it's a wonder he can turn the pedals much at all. I guess he really is a warrior now.

Prowess: [Yawn] another Dutch wunderkinder. He won convincingly in the Dutch nats, a 50km course in Oudenbosch, which is Meuse River Delta country so I'll assume that was flat and windy. He also has two wins and a second in prologues, a rather odd combination. No great track record otherwise, apart from a couple mediocre results at the end of the last two Giri d'Italia, results that shouldn't get taken out of context.

Prowess: Another convincing national champion from a country that has a few cronomen around. He doesn't do a ton of these, and when he does they're in the midst of stage races where he either is or isn't trying for a GC place. IOW, hard to read. I'll take that fifth in Penafiel as a pretty good indicator. He's solid, if not great.

Form: Like I said, fifth in Penafiel. I have to wonder what his thoughts on the road race are though. Most of the guys on this list can't justify having any, but LuLu can. So if Cancellara is blazing at the first split, should he just pack it in and save it for Sunday?

Prowess: Silver medalist in 2008, albeit the Olympic year. Not really a big-time threat, as his wins are at short distances or in Canada. But you never know...

Form: Rested, I guess. He had a layoff during the Tour and has been upping his activity since then.

Prowess: Well, I wouldn't have said much until a couple weeks ago. But that win in Penafiel was eye-opening. Prior to that his results were respectably uninteresting. Even when he won the U23 Worlds road race, he was only 15th in the crono. Dunno, maybe this is the first time he's made it a priority.

Form: It's possible his young legs could be tired after a spectacular podium finish in the Vuelta. If not, the alternative is that he's on fire.

Prediction: How many guys have I crammed into the top five so far? He's a real dark horse, a guy with a sudden crono pedigree who can also climb... but who might have nothing left in the tank. Anywhere from 1st-13th. Let's say 6th.

Prowess: Not bad, but solid results in Genk and Denmark don't automatically transfer to the longer distance and far stiffer competition. Clearly this is among his many talents and he'll win some races this way before too long. But I think he needs to grow a bit more before we start tossing him in amongst the Bears.

Form: He's Australian. If he hasn't been priming himself for this week, soemthing is terribly wrong.

Prediction: Top ten. Not sure where. Probably no higher than 7th.

Prowess: Another homebody, but also a treble world champion in the event. I'd put him alongside Millar as guys whose past might cause them to be overrated, but once you get past that he's still a very solid cronoman. That second place in LA, a 33km race, isn't a bad marker. Same dry heat...

Form: He's had two starts since the end of the Tour, both in Canada. I suppose he knows what he's doing.

Prowess: Hard to gauge. Winning the Dauphine, a 49km event, says a lot, unless of course a lot of the guys at the Dauphine, like Contador and Menchov, weren't quite going all out. He disappears a lot too, though that has more to do with stage racing. He has been in the top ten at the last two worlds, which is about as clear a picture as you'll get.

Form: Same as Rogers, futzing around since July. Probably good.

Prediction: Have I given away all the top ten spots yet? 9th sounds right.

Prowess: Like Porte, the kid has talent. That fourth in the Dauphine, after running second in the prologue, was impressive. But I suspect his development is a bit behind Porte here.

Form: Could be exhausted after his first grand tour. He certainly was in Madrid.

Prowess: Spare a little change for the former world champion? I wrote him off earlier this year but his third place in the last Tour de France crono was impressive, a bit of a comeback ride I'd say. Don't totally sleep on him.

Form: Puttering around, biding his time, tensing like a coiled snake...