After a week in the Netherlands, where even the speed bumps get categorised and given QOM points, we now head to the south of France, the Rhône-Alpes and the Ardeche for some proper climbing. This year is the 8th edition of the Tour Cycliste Féminin International de l’Ardèche, a race of 6 stages and 530km over 5 days including no less than fourteen categorised climbs, and lots of other hills where they don’t bother to categorise them but go over the top anyway. And if that doesn’t persuade you then how about this, for sale at the start and end of every stage, along with key-rings, tee-shirts and pens: 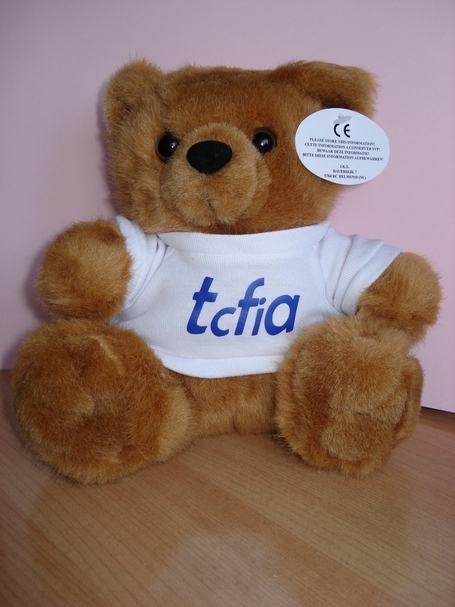 First of all thanks to Gwena for finding that great bit of video above; I don’t like to play up stereotypes, butyou half expect to see a man with string of onions round his neck and wearing a beret and a stripey jumper chasing the peloton. She links to a rather more sensible bit of video too on her blog if you follow that link, plus to a blog that I can’t quite make sense of beyond the fact that whoever writes it has drawn some sweet cat caricatures and isn’t one to mess around with spiders and glasses.

Now to the race. It’s hilly. Stage one on Tuesday (today, whoops) is the easy day with 112km and just one small categorised climb very early in the day. The road from Le Pouzin to Beauchastel could be more of a warm-up for the rest of the week, since there looks to be plenty of road for the peloton to chase down a break.

Wednesday is a bit tougher because there are two stages. First of all a morning time trial around the town hall at Vals les Bains which looks flat until you realise that the light orange stripes are between 5% and 7%, while the darker ones are between 7% and 10%. Only 3.5km, so this might actually be the best chance that the sprinters have all week. Then in the afternoon comes the seriously bizarre stage 3; possibly the most mixed up stage I can remember seeing. The profile shows a small hill at 21km, but rather than sticking a GPM line at the top there is an intermediate sprint at the far side. Then there is a very small GPM climb at 27km which seems to resemble a Belgian climb, being just 40m higher than the preceding flat, but including a bit of 7-10% on the way. Usually this would probably be left to the break to take the points, but here’s the catch. Just 3km further up the road at the 30km point and outside the Bar Chez Paulette is the Prix Claveyrolat put up by the bar owner William Claveyrolat in memory of his brother Thierry, a bonus sprint offering to the first three across the line 500€, 300€ et 200€. (compare that with the hair curlers, coffee maker and underwear that I seem to remember Lizzie Armitstead winning last year for her 3rd place). From there the stage starts to look more normal with a big climb followed by a quick downhill run-in to the finish in Le Teil (and this isn’t the only cycling coming to Vals les Bains this week – the Tour de l’Avenir visits on Thursday and Friday, and there is also a short 12.5km randonnée on Wednesday afternoon for local cycling schools, setting off half an hour after stage 3 leaves. Take Teddy for a Tour.). 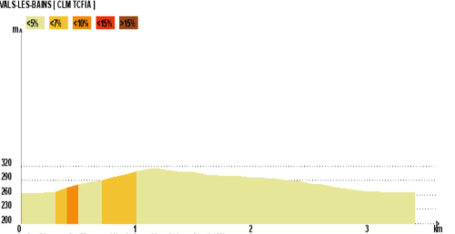 Stage 4 is the queen stage, 117km from Saint Sauveur de Montagut to Cruas, and the second stage we’ve seen this year that begins with a 30km climb. All those little orange stripes give warning of what the road is like.

Stage 5 on Friday does not include such high climbs, but it’s still got a lot of up and down, is the longest stage of the week at 120km, and ends with an almost 30km long uphill drag. Not many orange stripes, but 30km is still a long way, and the routebook marks out seven points in the final 20km as being dangerously narrow.

The race finnishes on Saturday with a stage running from Saint Just d’Ardèche to Saint Martin d’Ardèche, two places less than 5km apart as the crow flies, but this race being for cyclists and not crows the organisers have managed to stretch that distance out to almost 90km by including a couple of little trips out of town to climb the local hills, and then returning to cross the finish line no less than four times in total.

As you see, barring that prize on stage 3 this ain’t much of a race for sprinters. Intermediate sprints there are aplenty, but most of them come at the bottom of a descent when the sprinters will no doubt still be wheezing their way over the top. The other thing to note about this race is the brilliant, harlequin-style, leaders’ jersies. I’ll try to find a picture of that later, but as I see that stage 1 results are already out……

Profiles (and Teddy Bear) via www.tcfia.com