The Tour de l'Avenir, the race of the future, is on this week. This race is the place to see the emerging talents of the sport. Taylor Phinney took the first leader's jersey of the race by winning the openning prologue on Sunday. Despite pulling out of his pedal during Monday's sprint finish, Phinney began today as the Tour leader. A name to remember: John Degenkolb. Degenkolb, riding for the German national team, won Monday's sprint and added to his already impressive collection of results for this season. The young German will join the pro ranks next year with HTC-Columbia. 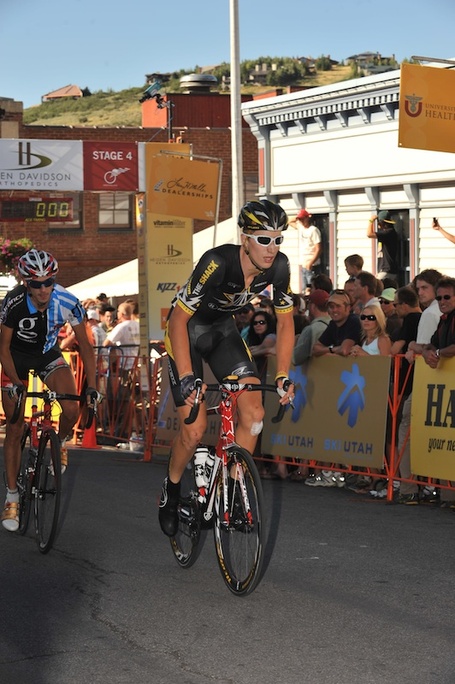 stage by just 5 seconds. Though currently riding the Tour de l'Avenir for the French national team, Delaplace has spent this season racing his first year in the pro ranks with Saur-Sojasun. Behind Delaplace and Lindeman, the main field nipped at their heels and Romain Hardy of France won the bunch sprint for third just 8 seconds behind Delaplace. John Degenkolb finished fourth. I did say to remember that name.

The United States team of race leader Taylor Phinney worked hard on the front throughout the stage, but the wheels came off for the Americans when Phinney crashed on a wet descent with 12 kilometers left to race. Phinney finished 19 minutes down on the winner before heading to hospital. Reportedly, he will start the race tomorrow.

Alex Dowsett of Great Britain now wears the leader's jersey. Dowsett sits just 1 second ahead of Michael Matthews of Australia and 14 seconds ahead of today's stage winner Anthony Delaplace. Tomorrow, it's a day for the climbers, as the stage finishes with back to back climbs. The finish sits at the top of the col de Bèal.

Photo: Christopher See. Taylor Phinney at the 2010 Tour of Utah.