Get to know Australian rider Lauren Kitchen - A star of the future.

Share All sharing options for: Get to know Australian rider Lauren Kitchen - A star of the future.

Don't worry fellow Cafe readers - you aren't seeing things, this is indeed me -Miffy Galloway - attempting to venture into the world of journalism and do what Pigeons and Gavia do o so well... Rider interviews. My first victim is recently crowned Australian Criterium Champion Lauren Kitchen who, despite only being 20 years of age, has cemented herself as one of the promising stars of the future in Women's cycling. So read on Cafe readers, if you dare :)

Get to know Australian rider Lauren Kitchen - A star of the future.

20 year old Lauren Kitchen started her Australian Nationals campaign off in the best way possible by claiming the first Gold medal on offer at the Championships and the title of Australian Criterium Champion. Kitchen used her experience and vast knowledge of race tactics to out sprint fellow breakaway compatriot and rising star Jo Hogan.

Lauren Kitchen is part of a group of rising young stars who will become the future of Australian Women's cycling and after her recent success at the Australian National Championships where she also claimed Bronze in the U/23 road race and Gold in the U/23 time trial, I jumped at the opportunity to have a chat with her and she kindly shared stories from her career, talked about her ambitions for the season and offered her opinion on the current state and future of women's cycling. 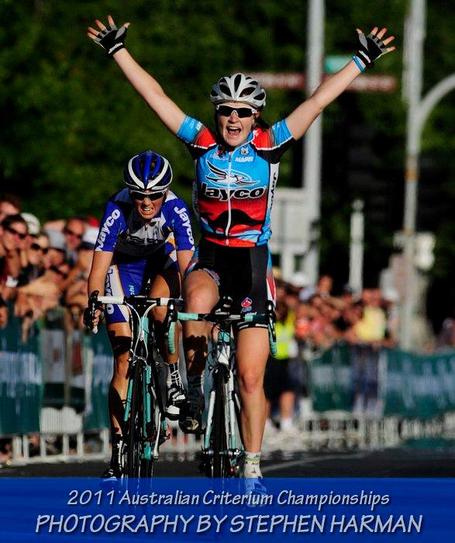 Kitchen first started cycling at age of 14 where she was picked up in the National Talent Identification program initiative, which has been responsible for recruiting such talents such as 2010 Australian Criterium Champion, Carly Light and 2010 Oceania Road Race and Time Trial Champion Bridie O'Donnell, conducted in her hometown of Port Macquarie. Kitchen went into the testing with an open mind and shortly found herself loving the challenging and the social nature of cycling. - ‘I enjoy the social side of riding bikes. I love coffee shops, I love the travel that comes with the sport...I think it's kind of an addiction.'

Kitchen progressed rapidly through the junior ranks and showed that she was a star of the future by placing 2nd in the Australian U/19 Road Championships in her first year in the category. Her strong showing there warranted her gaining selection in the Australian team to represent at the 2007 Junior World Championships in Mexico where she went on to place a very impressive 7th in the World. In 2008, Kitchen went one better and took out the title of Australian U/19 Road Race Champion and again was chosen to represent Australia in the Junior World Championships in South Africa where she placed 39th. Unfortunately, shortly after returning from the championships, she sustained a fractured pelvis whilst out training in Canberra. Kitchen was bound to a hospital bed and had to lie flat on her back for 4 weeks followed by enduring 4 weeks on crutches. When asked how this affected her, especially as it was during her transition into the senior ranks, she said humbly that ‘It was a set-back definitely but these things happen. Lucky for me it happened at a relatively unimportant time of my career. The biggest thing I got out of this set-back was patience.' 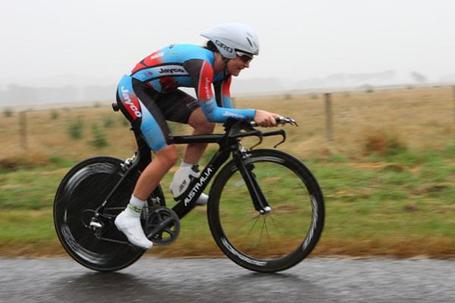 Now, still at only 20 years of age, she is part of the Australian Institute of Sport team competing in Europe for the second year in a row. Whilst competing in Europe, she is based at the AIS residences in Varese, Northern Italy which she speaks highly of in terms of both the facilities and training that is offered to them ‘The AIS base in Europe is a fantastic facility. We have access to great facilities as well as having the independence to look after ourselves in terms of cooking, cleaning etc. The training in Northern Italy is awesome, there are so many great and varied climbs as well as many different flat options, the weather is generally pretty good and the coffee shops tie it all together ;).' For 2011, Kitchen will be sharing the residences with the rest of the Women's AIS squad consisting of Alex Carle, Amanda Spratt, Ruth Corset, Shara Gillow, Carly Light and Megan Dunn. Kitchen says that 2011 will be a very exciting year for the Jayco-AIS Women's team as the ‘team is a great mix of skills and strengths, we all get on extremely well and I think that is showing in the results we have achieved already this year'. When asked how she thinks the team will compare to the powerhouse teams such as AA-Drinks and HTC Columbia Kitchen admits ‘It is always challenging to line up against the world's top professional teams but I think in 2011 we will make a mark in Europe as most of the team have gained some experience over the past few seasons of the European racing calendar and we know what it is going to take to do it.' Kitchen also had strong opinions about the current state and future of women's cycling stating that ‘Women's cycling is growing very quickly all around the world and I think many more people are getting into it. There are more and more women's teams popping up at local, state, national and international levels that are helping to move the sport forward.' When asked how the profile of Women's cycling can improve, she agrees with common consensus saying ‘Having more events alongside the men's events is another boosting factor. Women's cycling is very exciting to watch and I think we will continue to see it move forward into the future.'

As a rider, Kitchen describes herself as an all-rounder as opposed to having one specific strength and hopes to be able to develop into a team captain or leader in the future. Lauren Kitchen showed her versatility as a rider at the National Championships by medaling in all three road disciplines. When asked what was going through her mind during the Criterium held in the Ballarat CBD, she stated ‘I was just trying to work well with Jo and to stay focused as we had a lot of laps to go when we got away. I didn't think we would stay away until the last lap when I heard 31 seconds as the gap on the bell lap. I knew I had to be smart in the sprint against Jo as I knew she was strong so I was just trying to assess the wind and where to sprint from in the final lap and bit.' Kitchen describes the win as ‘awesome', rating it as her highest rated performance to date. To make the moment even more memorable for her, she was fortunate enough to have her Mum cheering her on from the side lines, to whom she dedicates a lot of her success to -‘It was unreal for my mum to be there when I won my first Australian senior title. She has supported me for so long, through all the ups and downs that are our sport. It was very special to have her there.' A couple of short days later, she lined up to 102km road race in Bunninyong in which she sprinted for 3rd with the help of her team mate Alex Carle in the U/23 category. If that wasn't enough, a few more days later, Kitchen won the U/23 Time trial championships which she herself admits was a bit of a surprise - ‘It was a bit of a surprise, I haven't done any time trials really since I was a junior but I knew I had some good form and I really liked the course so I hope it's just the start of more time trailling to come.' 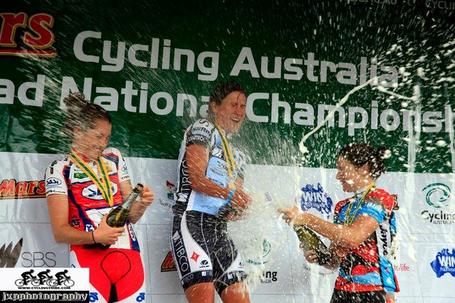 Lauren Kitchen celebrates on the podium of the U/23 RR with winner Carlee Taylor (SA) and Sinead Noonan (SA) (cyclingnews.com)

For the 2011 season, some of Kitchen's goals include having a strong focus on performing at the European Classics in April as well as striving to make the World Championships team to compete in Copenhagen in September, with hopes of signing for a professional team for the 2012 season. In the future she hopes to win the Tour of Flanders, her favorite race due to its history and challenging nature, as well as donning the Green and Gold at the Olympic Games, Commonwealth games and World Championships. However in the mean time Kitchen has a full schedule in preparation for her European season which sees her competing in the Women's criteriums running in conjunction with the Tour Down Under in Adelaide followed by an AIS training camp in preparation for the Ladies Tour of Qatar in the first week of February. After the tour, she will fly to New Zealand to compete in the NZCT Women's Tour of New Zealand ahead of another AIS camp in Canberra in late February. Her last race in Australia will be the Oceania Championships in Shepparton, VIC before the team heads to Europe to compete in the Classics in April.

Definitely a busy year ahead for the rising star but keep an eye out for Lauren Kitchen as this is definitely only an indication of what this young powerhouse from Port Macquarie is capable of.