An Open Letter To the Boss

Share All sharing options for: An Open Letter To the Boss

While Gavia's analysis and the Sports Illustrated article itself (and Joe Lindsay's story, and...) make for a spicy read, I suspect a lot of us aren't captivated by the latest revelations. A lot of us would just like to say... well, since I know he reads the Cafe (trolls!), I'll speak directly to the man, the myth, the legend... Lance Armstrong.

I agree with you, there is nothing new in the Sports Illustrated article. It's just more of the mainstream media picking over old news and calling it a sensational new development. Sure, there are new voices in the he-said, she-said litany of doping accusations and rebuttals, but "Armstrong Accused of Doping" isn't news. That you may have been some sort of ringleader isn't news. If you came out and admitted it all, it wouldn't be news. Nothing about the fraudulent nature of cycling from roughly 1992-2005 is news. 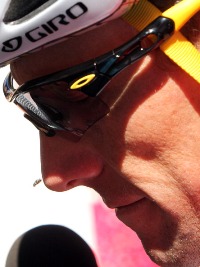 Even if it's true, that wouldn't change my opinion of you and your guys. OK, in part because I already feel like I know too much, starting with the LA's War portrayal, to rekindle the warm fuzziness I felt from 1999-2003, but that's sports fanhood. Sure, there are guys who seem like true heroes, but do I really know Larry Bird or David Ortiz or Tom Boonen? Nope. So I won't pretend I do. And I won't just blame you guys for doping -- it's not as simple as that. Should you have stood down while Ullrich won seven Tours? For your sake, probably yes. But there's too much blame to go around for anyone to focus on one person. Doctors, teams, sponsors, races, and worst of all the UCI... nobody is blameless. And I won't pretend to understand the choices you made, in the context you made them. How old were you when someone first told you "how things work"? Sixteen? How old was Ullrich when someone first spiked his breakfast shake, 13? That's the world that you grew up in, that probably felt like it just closed in on you from all sides. You chose not to fight it. So did a lot of guys. Whether you were more or less enthusiastic about playing ball doesn't seem overly important.

You and everyone from that era remain a threat to continue to overshadow the story of cycling as it now stands. [Ed: original went too far.] The longer you stick around, the longer you remain the face of cycling to a broad swath of casual fans and to reporters from beyond the sport like the Sports Illustrated folks on this story. The biggest outlets reaching the broadest audiences always seem to work with the bluntest tools. Nowhere does the story report that cycling has changed, that the revelations arise from a lost era, that your continued cycling is nothing more than a sad epilogue. No, to them hero-worship and de-worship is always the story, and anything related is news. It's damaging and stupid. If anyone involved here is a troll, it's the people still obsessively picking over the bones of your career. And you're just feeding them.

So leave. Go hide out somewhere. Force the spotlight to shine on someone else, like Gesink, Gilbert, Phinney, Van Garderen, Farrar, Cavendish, Hushovd, Haussler, Velits, Goss, Boasson Hagen, Nibali, Anton, Porte... anyone else. Force the media to write about the progress that's been made since Operacion Puerto, which is more than can be said of soccer, football, baseball, etc. Help the face of cycling morph from your image to Cav vs Farrar, or Nibali nearly dying on the Sierra Nevada slopes, or Cadel Evans turning his mud-stained body inside out again. Hell, or Emma Pooley bombing the descent of the Geelong time trial.

It's not about the bike when you're around -- hasn't been for a long, long time. I'm sorry if that hurts, I know the simple pleasure of riding and racing which you once probably enjoyed way back when. But for the rest of the sport, it is about the bike. There are hundreds of beautiful stories out there, waiting to be told to what looks like a growing, worldwide audience... if only you'll stop blocking the light of day. If you still love cycling at all, you have to leave it alone.