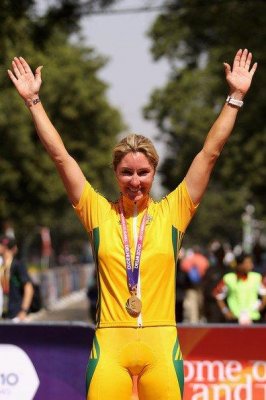 ng summer to summer across the hemispheres, going from riding in Europe with the Lotto Honda Team to the Honda Dream Team in Australia – and in 2010, instead of taking a break between them, she was out in Delhi, winning the Commonwealth Games Road Race.  But she doesn’t just ride for her teams, she also manages them, setting up Honda Dream Team from scratch.  And she doesn’t just ride her bike, she also loves the whole mechanical  side, saying "I bet my personal tool box and spares box is more complete than most women’s pro teams would have! ".

She started racing at 3 years old, has ridden pretty much every kind of cycling you can imagine, and has also competed in gymnastics to a national level.   If that’s not enough, she’s also one of the kind of riders who help us follow the sport, through her twitter and blog.  And off the bike runs her own business and is an adrenaline junkie, loving extreme sports and motorsports.

She’s a pretty busy woman, right?  So I’m delighted that she found us time between the Australian races to answer some of the questions I sent her for us here at the Café - read on below!

Pigeons: I’m really interested in the fact you ride for and manage the two teams.  How did you get into the management?  And how hands-on are you? 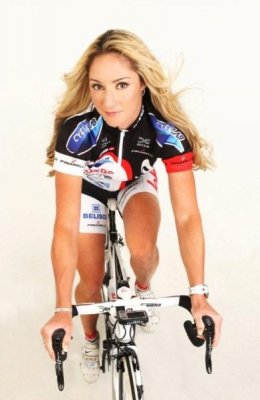 Rochelle: I joined Dany Schoonbaert at the Lotto Ladies Team at the end of 2008 because I had heard he was a very kind hearted director wanting the best for his riders - this was important to me. I knew the team needed additional sponsors and financial backing to reach a new level so I worked very hard during the next 2 years to arrive at the level we’re at today; competitive, stable and able to provide a nice, comfortable environment for our riders.

During 2009, and more so in 2010, I was very involved with the running of the team - rider management and specifically the PR and sponsorship negotiation side of things - but in 2011 I would like to try and take a step back and concentrate on riding & winning. The team is in a strong position and Dany can handle most of the team’s responsibilities alone.

At the end of the 2009 European season I returned to Australia with a little knowledge about running a cycling team - I had already learnt a lot from working with Dany at Lotto and securing new sponsors. I recognised that Honda Australia had entered the sport of cycling by sponsoring a women’s event at the Herald Sun Tour, the Honda Hybrid Women’s Tour. I spent a couple of weeks preparing a proposal for Honda Australia to sponsor a new professional women’s domestic cycling team. The ambition was to clearly dominate the Australian summer series and offer Australian women the opportunity to be a part of a professional organisation and earn money from their profession. The Honda Dream Team has had huge success to date, winning nearly every race we’ve contested and also satisfying Honda with a healthy ROI (return on investment). I am the owner and manager of the Honda Dream Team.

Pigeons: I was wondering if there's ever any conflict between the roles of manager and rider - or maybe a better question is how do you find the time to balance the responsibilities, both for riding/managing, and for both teams?

Rochelle: I have not found there to be any conflict whilst being a rider and a manager.  As a rider I tend to understand the immediate needs of the riders and what is and is not a reasonable request. I try to never compromise a rider’s performance and I always try to offer the riders the best opportunity to perform at their best - every time! Balancing the roles of manager and rider is getting easier with more experience - the key for me is to make sure I always put my training and recovery first. During the past 2 years I have learnt how to deal and cope much better with surprise situations, I’m managing more efficiently now. Whist I’m the only manager for the Honda Dream Team, Dany will take on most of the responsibilities associated with the Lotto Honda Team in 2011.


Pigeons:  We loved the links between Lotto and the Honda Dream Team in Australia & Nashua Toyota in South Africa, and the way Ashleigh Moolman and Tiffany Cromwell were able to get rides in Europe through Lotto.  How 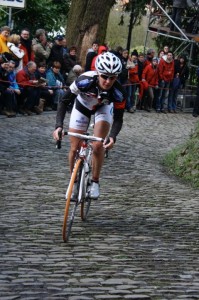 much were you involved in that - and is it something we'll see more of?  It seems a really innovative approach.

Rochelle:  It was very exciting when both Ash and Tiff were confirmed on the Lotto team. Dany has a strong relationship with one of South Africa’s biggest supporters of Women’s Cycling - Roy Gershow. Roy has been extremely impressed with the organisation and management within our team Lotto and therefore feels comfortable sending riders over to Europe (to join us) when they are ready. Ash exceeded everyone’s expectations during her first ever season in Europe last year. She managed to finish inside the top 20 at the Giro d’Italia in 2010. We really look forward to working with Roy’s South African riders this year; Ashleigh Moolman, Cherise Taylor and Lizanne Naude.

Tiff joined our team late in 2010 and finished 2nd in a UCI 1.1 race just 24hrs after she signed with us - I sensed her motivation was very high when pulling the Lotto jersey on for her first race with us! I’d say that Tiff’s decision to join Lotto was influenced by the strength of our friendship, and her knowing that I’d always do the right thing by her. Tiff has joined us again in 2011 and is extremely ambitious to lift her level and add some big results to her palmares.

I’d certainly hope that our relationship with the South African’s and Australian’s remains strong in the years to follow.

Pigeons:  I read that you started racing BMX at 3 years old - what are your earliest cycling and racing memories?  And if it was purely for love, which out of all the different cycling disciplines you've ridden (as far as I can tell, it seems like "everything but CycloCross"!) would you do for fun?

Rochelle:  I remember racing in the under 5 boy’s category with training wheels on, it was my first race on the BMX track at the age of 3 with my two brothers. My dad stood at the big jumps and just gave me a tiny push over the top if I couldn’t manage.

Purely for love, it would be motocross… the adrenalin rush is amazing, more so now that I only get to do it a few times during the Australian summer with my brothers! Hmmm, but without an engine, I think it would be keirin or scratch racing on the track, or criterium racing on the road - anything fast and tactical! I would absolutely love to try CycloCross but it’s very difficult to sacrifice an Australian summer! I’m forever thinking about it and considering a CycloCross season.

Pigeons:  Which are your favourite races - and which do you count as your biggest cycling achievements? 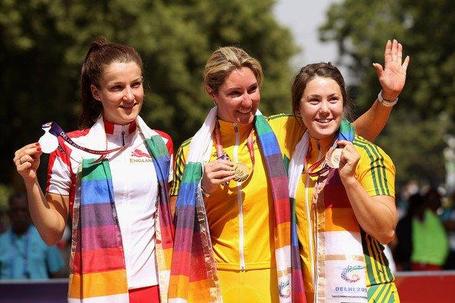 s the women’s version of Milan Sanremo, it was called Primavera Rosa. We raced the last 100 odd kilometres of the men’s circuit…. I miss it so much; it was a really fun race! My biggest cycling achievement was winning the 2010 Commonwealth Games in India. I also recognise my road and track world cup wins, giro and TDF stage wins as major career highlights.

Pigeons:  I loved your win at the Commonwealths - even though, as a Brit, I wanted Lizzie Armitstead to win - you and Chloe timed it to perfection. How was the Delhi experience?  How was it riding without spectators?

Rochelle:  You Brits had a number of riders very capable of winning the Commonwealth Games; Lizzie, Emma and of course Nicole Cooke!!

The race was actually quite fun for me; I felt good and wasn’t affected by the heat and dust on race day. My job was to follow Nicole Cooke in the race, and protect Chloe’s wheel in the final kilometres. I can remember being super relaxed. The finish played out exactly as I had visualised.

The Delhi experience off the bike was as portrayed in the media, very dirty and primitive. Our apartment didn’t have lights/electricity for more than 2 hrs a day. The heat, dirt, germs, mosquitoes and lack of electricity were the most challenging aspects of the trip.

I must admit that racing without spectators had no impact on me; I knew the importance of the race. The Commonwealth Games only comes around every 4 years and I had worked very hard for a long time to ensure I’d be ready on the 10th of October 2010. I knew the race would be viewed by thousands of people via TV broadcasts. 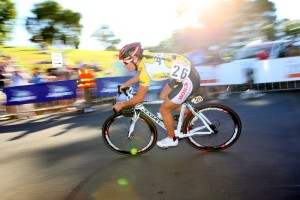 Pigeons:  From your website, it seems like you have all kinds of other business interests - what are your ambitions for life post-cycling?  In 10 years time, do you want to be still involved in cycling management, or do you have other big plans?   And what do you want to have achieved before you stop (which is hopefully ages away!)

Rochelle:  Firstly, I’d like to win a World Title and Olympic Games… perfect if that happened by the end of 2012!!

Post cycling…. I’m sure I’ll always be busy and working hard towards achieving something- I can’t imagine living without big ambitions. I’m not sure exactly what they will be after cycling. I enjoy managing female athletes and women’s cycling teams, it’s very rewarding- it’s definitely a possibility that I’d continue with a career in management. I really enjoy working in TV, presenting and commentating but that might be influenced by the company I’ve worked with, the likes of Phil Liggett and Paul Sherwen. I’d like to pursue a career in reporting and commentating after I retire from professional cycling but in the back of my mind I also have many other business related ambitions. Amongst all this, I desire to have a family.

Pigeons:  What would you most like us to know about you?

Rochelle:  Many people who I meet and get to know tell me that I’m nothing like they expected me to be, and nothing like people assume me to be. Perhaps my image doesn’t match my personality?

Interview:  Sarah Connolly.  All photos property of and used with permission of Rochelle Gilmore