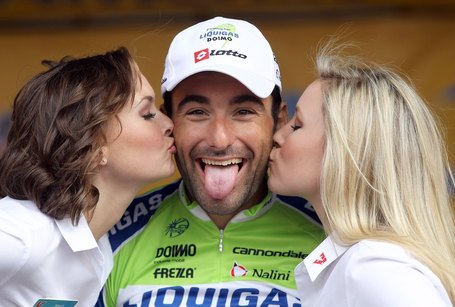 The Cafe may be a lot of things, good and bad, but one thing we don't do (much) is live in the past. So as I continue slogging away at the Team Capsules feature, wherein I make generalizations about top level pro teams in which I have enough interest to say something, will turn the page on 2010 and look ahead. OK, in part by looking back, but while the previous capsules were 85% 2010, from now on the focus will shift forward. Not sure how much yet, as I have neither written or thought through the proposal. Whatever, here goes!

No matter how you slice it, Liquigas are coming off their best year in... forever. Their total of 40 wins tops their best effort since they came into being in 2005, and they topped 10k points on the CQ chart for their second time, the other being a 2007 season which is probably best ignored, built as it was around Danilo "Pipi of the Angels" DiLuca. No, in 2010 Liquigas were at their best -- and young, aggressive, maybe even clean to boot.

[OK, that last part, who knows. But Pellizotti got popped before he could tarnish the team's achievements; Basso is facing a lifetime ban so hopefully he's not that stupid; and the rest of the team didn't raise any flags. Maybe it's all the kids. Children are the future, after all.]

Perhaps the biggest change for the 'Gas was in their mentality. I know, gross generalization alert, but all spring long it seemed like there were limes gathering in bunches on the front of the field. Watch Gent-Wevelgem, for example, where they didn't get much in the way of results (Daniel Oss led home the first chase group) -- they were spoiling for a fight, whether or not they had the guys to finish it off. Throughout the winter races, Paris-Nice, the classics season -- De 'Gaas were there. And when the wins started rolling in, they responded like a lot of teams do when success starts snowballing: they rode it for all it was worth. 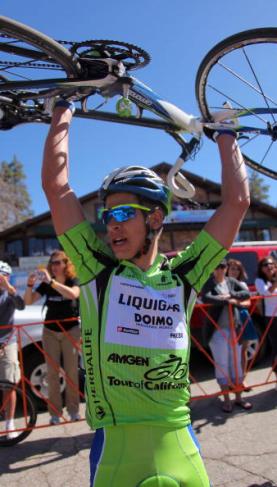 Everyone knows about their two grand tour victories, and about Vincenzo Nibali leading the points universe in practically every poll. Neither Basso's Giro nor Nibali's Vuelta were a total surprise. But the contributions from the kids, particularly their Eastern European contingent, was stunning. Slovakian Peter Sagan scored five wins in spring, all in Pro Tour-level races (Romandie, Cali, P-N). Croatian Robert Kiserlovski won the Giro dell'Appennino and came in tenth in the Giro d'Italia. Slovenian Kristjan Koren won the GP Citta di Camaiore sprint. Daniel Oss led the homegrown contingent with a win in the Giro del Veneto and competent performances throughout the spring classics, while Elia Viviani unleashed his sprint on the hapless victims of the Marco Pantani and Frank Vandenbroucke memorials. [OK, that's a little creepy.]

Coming into the season, the media was all a-twitter about the looming rift among the grand tour contenders, Roman Kreuziger being the most outspoken when he said his co-Tour de France leader Nibali had a "small motor." I suppose there are worse things to say about a teammate, particularly in Italy. But Pellizotti was getting itchy too, and his arrangement with Basso to share the Giro leadership was equally fraught with tension. Anyhow, drugs solve all of life's problems, as DS Roberto Amadio could tell you, because Pello got popped, Nibali went to work (respectfully and quite well) for Basso at the Giro, Kreuziger had the Tour to himself (more or less), and the Shark was the big winner in the end.

Pellizotti was an embarassment to the team and its accomplishments in 2009, when Save Ferris paraded around in the formerly awesome polka dot jersey he scored in France. None of that matters too much to the team now. More troubling -- possibly an overstatement -- was the failure of Roman Kreuziger to make much progress. At his age, with his talent, it's a tad discouraging to see his results level off or slide back a bit, but a) results can be misleading; and b) he still hasn't celebrated his 25th birthday. Anyhow, that's not Amadio's problem now because...

Liquigas got raided a bit, as often happens with teams who find broad success and don't have a massive budget to lock it all up. Kreuziger is now the main grand tour guy for Astana, and he brought Kiserlovski with him to boot. With Pellizotti gone (and contesting his dismissal) that leaves Basso and Nibali in total charge. So Vinny had better not have a small motor.

The sprint team was also raided when DANIELE BENNATI WENT TO TEAM leopardschleck (did I write that right?) and Chicchi skipped town for Quick Step. And their classics squad watcher Manuel Quinziato and Frederik Willems head off to BMC. Personally, while I respect Bennati's desire to lead the sprint team someplace, it's his value as an all-round glue guy that will be missed more.

Coming in are helpers and kids. Simone Ponzi and Damiano Caruso have shown flashes on the U23 circuit. Eros Capecchi and Dominik Nerz can climb, it seems.

Aside from Basso, this is a homegrown squad, pared down (willingly or not) in a way that focuses the team on letting their kids show what they can do. Viviani could start putting his track success to work for him in the sprints, though at 22 expectations should probably stay low for a few months at least. Koren and Jacopo Guarnieri will also be looking to make their case for top sprinter in the squad. Oss and Sagan will be unleashed on the various one-day circuits, not with as many teammates and certainly not with the benefit of anonymity... but in Sagan's case at least, knowing who he is doesn't mean you can stop him.

[Aside: when a team hires your brother, is that the true measure of how awesome you are? Some brother combos are harder to differentiate, like the Schlecks or maybe the Velitses. But Fausto's aura kept Serse employed right up to his tragic end. Yvon Madiot was the classic package deal, following his double-Roubaix-winning brother Marc around for years. So while I don't know all there is to know about Peter Sagan, the fact that Amadio brought in his older brother Juraj in the middle of last year says something.]

There's plenty of depth in the grand tour squad, and every team would love to have superdomestique Sylvester Szmyd on board. But both of Liquigas' grand tour wins featured two-pronged attacks, and Basso has the Shark to thank for his Giro win after they worked over then-maglia rosa David Arroyo in beautiful, vicious tandem. So can they be expected to produce with sole leaders? Will Amadio's problem in 2011 be too few generals? Personally I don't rate Basso too highly at the Tour. Nibali at the Giro... OK, that I can see.

* Last week of the Giro. The 'Gas were hands down the biggest thing in all of Italy last year, with almost nowhere to go but down. This year's Giro will be a climb-fest of absurd proportions -- not exactly a Nibali course -- so the pressure will be dialed up to 11 when the race hits the bottom of the Zoncolan.

* Ditto for the Tour. Frankly, Basso is probably the better pick for the Giro, he was the top climber in the 2010 edition. But once you've won the Giro, it's time to head to France, and Basso's performance there will be the story that garners the most interest all year. If Contador is out, the podium becomes somewhat wide-open, particularly with another contender, Menchov, sadly forced to the sidelines. Basso can't touch Andy Schleck, but a podium spot isn't unthinkable by any means.