Share All sharing options for: Ray of Light for Geox? MSR Beckons 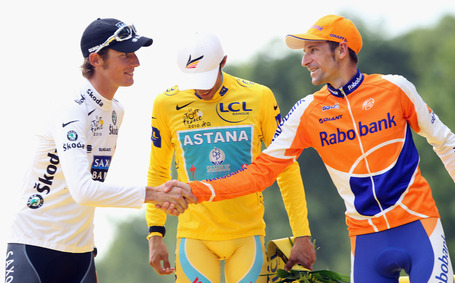 Mauro Gianetti's famously neglected Geox-TMC squad received the first good news of its young tenure when it was granted one of the seven pro conti slots for the spring monument Milano-Sanremo. This is exciting enough on its own, since Marko Kump becomes my darkhorse for the win. [Someday.] But it carries extra significance since the race is owned by RCS, organizers of the Giro d'Italia. Denis Menchov is telling anyone who'll listen that he's turning that Tour de France frown upside down, focusing on another victory in the Giro d'Italia and a shot at the Giro-Vuelta double.

Not that Geox have an invite to the Giro yet, and RCS are playing a little good cop/bad cop with Geox by inviting them to MSR while excluding them from Tirreno-Adriatico. But Le Due Mari takes 20 teams, MSR 25, and the Giro 22. Mathematically, then, Geox has a 40% chance of getting one of those last two Giro spots. Right now Tirreno includes the 18 Pro Tour teams, plus Stefano Garzelli's Acqua e Sapone and Giovanni Visconti's Farnese Vini squads, two certain Giro invites. So there really are only two spots left. Menchov's amazing win in the 2009 Giro, plus his sincere ambitions in 2011, should up Geox's chances considerably.

Their competition, at least from the MSR list, consists of:

So it's Geox, Colnago and Androni for the last two spots. If you've heard some rumors about how this is gonna go down, feel free to enlighten. Me, I dump Androni and take the other two; better to include two serious, non-shady contenders than convicted dopers like Sella. Of course, I realize the Giro invite can be life or death for pro conti Italian squads, but hopefully nationality doesn't trump all. Geox are a serious team and Menchov doing the double would kinda make up for the Tour snub, at least sporting-wise.