Share All sharing options for: CycloCross Hoogerheide: the final World Cup round.......... LIVE!!!

Today we're in the Netherlands for the final race of the 2010/11 World Cup Series - the GP Adrie van der Poel in Hoogerheide - and the final big race before next week's World Championships - so what should we expect?

GS, in her calendar, says:

Hoogerheide is in Holland, but it's so close to Belgium that you won't know you're in Dutchie land. It's also really really close to the Kalmthout-Essen area, so Aernouts, Meeusen, Styby, Pauwels and Sanne Cant will feel right at home. There's not too much height difference - it is les pays bas you know - just one bridge and one steep climb. It's fast too, the riders only have to get off the bike twice.

But if that's not enough for you, there's the map, current standings, info and links to Lyne's reports of the course In Real Life below - and of course, links for how to watch....

So, the course.  It's flat, with lots of long, wide stretches, for the power riders to enjoy.  And apparently muddy too.  Here's the course map: 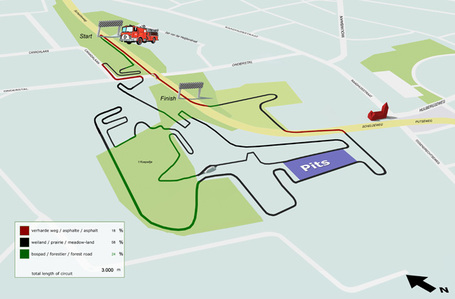 So two little bridges to cross, and some nice twisty bits in the forest for the technical people, but still, to me it says POWER!!!

But if you're one of those "maps are ok, I want to SEE it" people, Lyne is out there RIGHT NOW! and she's been taking photos and took a video of riders getting a feel for the course - head over here to see it all.

Now, this is the last World Cup round, so it's the first big competition of the season.  Stybar didn't ride last week's, and he's not in the running, but here are the current standings after 7 rounds for the men:

So with the points for the first 50 riders to cross the line running 80-70-65-60-55-50-48-46-44-42-40, then at 1 point increments all the way to 1, it would be possible for Nys and Pauwels to beat Albert - and given the number of races recently where accidents and more importantly, mechanicals, have played a big part....It should be a race that suits Albert - last year he won it, followed by Stybar and Pauwels.  Fingers crossed no one gets hurt today - more important than ever, given the Worlds next week.

And speaking of the Worlds, how will Stybar play this one?  He's not in it for the series, given the number of races he's had out - will he play it cool, hiding his form for next week?

On the women's side, the excitement for me is that this is the first time in the season Katie Compton and Marianne Vos have started on an equal footing.  Compton won the last few races they were in together (and it hasn't been many at all - Vos has been focussing on the tack this winter, so started her Cross season very late - and Compton has also been riding a reduced season, dividing her winter between Europe and the USA) but seeing as Vos was starting right at the back, on narrow courses where she had to fight to get round everyone else, that doesn't give an idea of how they compare.  Exciting!  And is Daphny van den Brand up to full fitness after her illness?  And can Sanne van Paassen keep the Series title?  I hope we do get to see the race live.  Standings after 6 rounds:

For coverage, our good friends and wonderful people at ProCycling, BVLS and Cycling Fans can help us out - and of course, no one is better for providing help and chat and support and comedy than the Café habituees!  And still want more?  Here's the end of last year's race!