It will be blood-curdling all over - WC Cyclocross, Sankt-Wendel, part 1

Share All sharing options for: It will be blood-curdling all over - WC Cyclocross, Sankt-Wendel, part 1 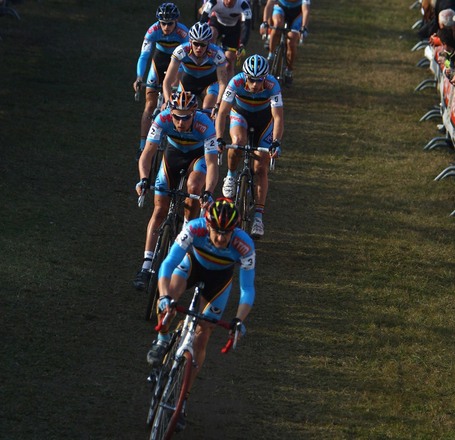 Finally, the most epic racing day of winter has dawned upon us. Finally, the battle for the muddy rainbow can commence. Finally, it's World Championship Cycling time. To get you ready for the big day - this Sunday - Pigeons and I have prepared two posts for you. Today: places, tomorrow: people.
But first, a quiz! Can you guess which CX World Champs this was?

The World Championships 2011 will be held in Sankt-Wendel, Germany, not too far from the French and Luxembourgian borders. Sankt-Wendel isn't part of any of the major series, nor is there an important standalone race there, but it isn't entirely unknown to cross fans. How's that? Find out, after the jump.

Flashback to six years ago, when the World Championships were held in, that's right, Sankt-Wendel. Back then, the prevailing theme seemed to be: national domination. The Czechs at the U23 (Stybar first, Simunek second), the Germans at the women (Kupfernagel first, Spitz second) and (booyah) the Belgians at the elite race (Nys first, Vervecken second, Sven VT third).

As you can see, six years ago, it had snowed. Whether it will or not on Sunday remains to be seen - temperatures are circling zero and some are forecasting wintery precipitation, but certainty there is not. Much will depend on the weather though, as Sankt-Wendel is a parcours which is very different in dry, muddy or snowy conditions. 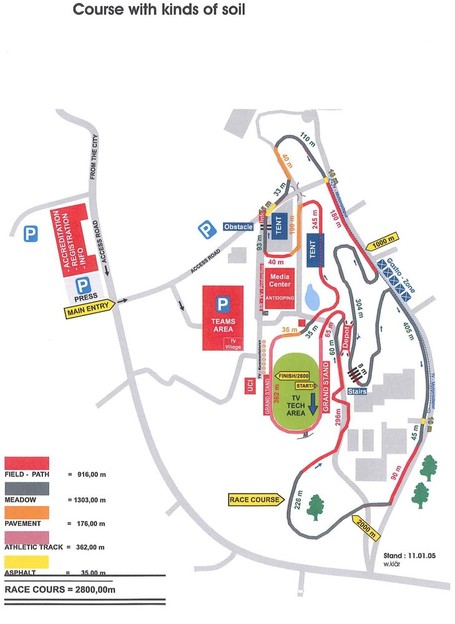 In a nice display of Roubaixism, the race (starts and) finishes on a track, albeit an athletics track this time. The race starts on the right side of the track on the map above, with the riders facing south.

The parcours description from the official website - which features a weird 90s techno soundtrack - is as follows:

Course Length: 2800 meters
Vertical difference: 74 meters per lap
The design of the race course takes into account both, the requirements of a world cup race and the interests of media, sponsors and spectators. With its vantage points the course which is 2,8 kilometres long guarantees that spectators and media can follow the race from very close. The athletes will be challenged physically by the constant alternation between steep climbing, downhill and fast plain sections.

Special Sections/percentage of the whole course:

The major descent is a bit tricky - especially if the surface is slippery. The climbing is part natural, and part staircase: a big one which will make the long-legged riders happy. The hills are alive with the sound of music short ankle-biters, perfect for an explosive attack if you're feeling a lot better than your competitors. Short as they are though, they shouldn't stop anyone from riding to the top. The two consecutive u-corners around the 1000m mark is another sneaky bit - get caught behind the wrong guy there and you could miss a decisive attack at the front.

But I've never watched Cross!  How will I understand it?
Never fear, we're here to help!
gs wrote an intro to Cross here.
And the UCI have a video to give you an idea of what Cross looks like:
But ask any questions you have here - and during the race, in the live race threads - and Café people are bound to be happy to help!
So how do I watch the races?
When?
Well, the programme runs like this:
Saturday, 29 January 2011:

Elite men's World champs race:  14:00 CET, 13:00 GMT, 08:00 EST, 05:00 PST, Sun 22:30 Australian Central
**Note!  The elite men's race is an hour ahead of standard cyclocross race start time!**
Where?
The official German media partner is SR, and I'm sure it'll be on German tv (but sadly, trying to find out where is beyond me). If you're in Belgium, you can watch all the races on Sporza's digital channels.
But we don't all live in Belgium, so luckily there are people who help us out.
The amazing Dutch tv station, Omroep Brabant  is showing the women's race on tv, and probably online too (it's the tv station for the area Marianne Vos comes from).
BVLS are suggesting all races will be streamed (scroll down until you find it)
Procycling will give us some ideas nearer the time
CyclingFans will put up streams at the start of the races
It might be shown on other tv channels - if you know of any, add them into the comments.  And we're planning a livethread for the juniors/u23 day, and for the women's race and the men's race - so on the day of the race, check in, and as ever, people will share their info!

What happened the past decade again?

And in case the title put you in the mood -

CHECK BACK TOMORROW FOR INFO ON PARTICIPANTS AND MEDAL CANDIDATES.