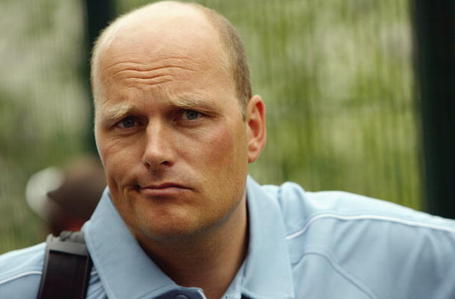 For years the script at Saxo Bank was incredible team cohesion, instilled by Bjarne Riis' unique approaches to offseason camps and roster building more generally. And all this is to say that scripts are often a bit too simplistic. Teams are groups of human beings -- small groups at that -- so interpersonal dynamics are complex and fluid. On the road, Riis got a lot out of his guys, including riders who were cast aside or underappreciated elsewhere. Carlos Sastre's Tour de France victory is the perfect example of Riis the tactician, playing his full hand of cards to perfection for a victory that was not at all assured or pre-destined.

But every sports story eventually grinds to a halt, if nothing else. And so when a well-funded alternative to the Riis Machine appeared in Luxembourg, Team Riis packed up en masse and left. Such breakups are almost never pretty, and this is no exception. One anonymous source told Cycling News that Riis cared more about his golf swing than the team. Fabian Cancellara told the story more openly: that Riis called all the shots, and while some riders profited from that environment, anyone who didn't was told to lump it. In the end, the LeopardSchleck dollars seem to have less to do with the demise of Saxo Bank than Riis' lost relationships with his mainstay riders. The team goes on in 2011, of course, but it bears little resemblance to the old formula. So it's time to mourn the passing of the great era of a great squad... and wonder whether Riis can ever do it again.

What We Thought Coming In:

We didn't do a team preview; Jens had previewed the Danish riders separately, and as for the rest of the team, there was little mystery coming in. Andy Schleck was all-in for the Tour, with the usual deep Saxo squad at his disposal, while Fabian Cancellara would probably do something to blow us away in spring. He had eyes on Flanders from the get-go, though if I'd bothered to write something I probably would have had him losing in a sprint to Boonen. Anyway, Matti Breschel was clearly going searching for a big win someplace, per Jens.

What We Got In the End:

About what you would expect. Statistically speaking, they were comparable to the 2009 edition in points and wins -- down slightly in both but running just behind HTC for the top spots. JJ Haedo didn't deliver quite as much in 2010 and Matt Goss had jumped ship; that and Jens Voigt not winning Criterium International more or less covers the statistical difference, for what it's worth.

Qualitatively, the team was a bit top-heavy, with Cancellara and the Schlecks dominating the headlines a bit. That isn't really a criticism -- Riis played his aces very well. And the young guys had their chances -- Jakob Fuglsang won the DanmarkRundt and was their featured rider in June and October, coming close at the Tour de Suisse and Giro di Lombardia. Matti Breschel looked like he was ready to storm across Flanders for all of Holy Week, until bad luck and a stratospheric teammate did him in. It's worth noting that the team functioned well as just that, even into July, when the news of Team LeopardSchleck had broken and Riis was telling every reporter in earshot how pissed off he was. Watch the early stages of any of the spring classics and you'll see Saxo pounding away on the front. Watch stage 3 of the Tour when Cancellara put his cobbledy-goodness to use for Andy Schleck. The only onion in the ointment was Frank Schleck's untimely injury -- Andy really needed a top-level climbing lieutenant to help pummel Contador in the mountains, and nobody else was really up to that task. But it's hard to blame guys for crashing.

One last bright note in a season of almost nothing but -- on the bike: Richie Porte arrived quite a bit ahead of schedule, grabbing a stage win in Romandie and inheriting the maglia rosa for a few days in May. Riis grabbed him from Praties in mid-summer '09, amidst a string of initial European success for the 25-year-old Australian, but I doubt anyone foresaw the major role he would play on the team coming so soon. Good thing, because by the time the CAS is done with Contador, Porte may be Riis' captain.

Down. In a big way. Sungard placed its bets on Riis for the next year or two (help?), and Riis in turn placed his bets on the most dominant rider of the current generation... who then promptly found himself in front of an Inquisition for clenbuterol. I don't know if there is much significance to this -- you can't blame Riis for signing Contador at the time, with his existing Tour squad headed out the door. But if Riis' stubbornness split the team initially, it's not altogether unfitting that his plan to trade upward for the Tour winner blew up on him. Nick Nuyens and Matteo Tosatto are no substitute for Cancellara, O'Grady, Breschel and co. in the spring. And I don't expect Porte to battle it out for the maillot jaune right away either. Best case scenario -- Contador is punished mildly or cleared for July, and Riis is dealing aces again. The Sorensens, Porte, Larsson and the incoming Astana lieutenants would make a useful GC squad. But if Riis loses his bet on the treble-Tour winner, it could be a lost season from start to finish.