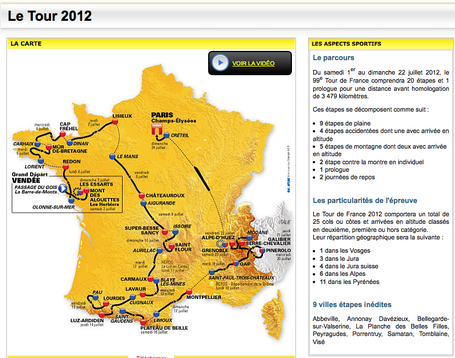 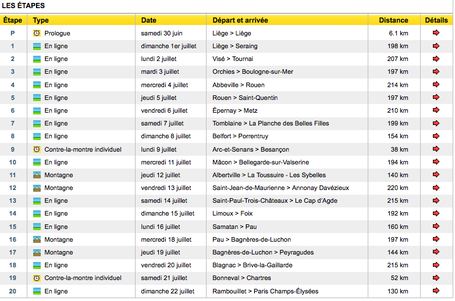 Thanks to the Googler Cache Cache, here are a couple screen shots of the Tour de France 2012 route leak. Though the map still shows the 2011 course, this page apparently describes the 2012 Tour de France course. The sidebar column details the stages and below is a list of the start and finish towns.

According to this page, which may be a PR stunt or may be an inadvertent leak of the 2012 course, the 2012 Tour de France will include five mountain stages, of which two will be mountaintop finishes. There will be a prologue and two individual time trials. The sprinters have nine flat stages to try their luck, while four stages are "accidentales," or chances for the breakaways. Of the non-sprint stages, there will be one with an uphill finish.

If this page is correct, the mountain stages include one climb in the Vosges. The Tour organizes have a new-found love for the Jura: there are three cols in the Jura and four climbs in the Swiss Jura. The high mountain stages weight toward the Pyrénées with eleven climbs, while the Tour climbs six cols in the Alps.

The race begins in Belgium with a prologue in Liège on 30 June and ends with the traditional sprint stage on the Champs Elysées on 22 July. That bit, at least, is certain. The official annoucement for next year's race is on 18 October 2011.