Share All sharing options for: Ferrier-Bruneau to Hitec, Corset retires - and more gossip, rumour & news from the women's peloton

It's been a week of mixed news for the women's peloton - very exciting times, as Hitec Products UCK continues their change of direction and takes on more top talent, signing Christel Ferrier-Bruneau - and sad times, as Ruth Corset, a great Aussie rider retires on a high. All this and much more signings, team news and gossip below the jump! 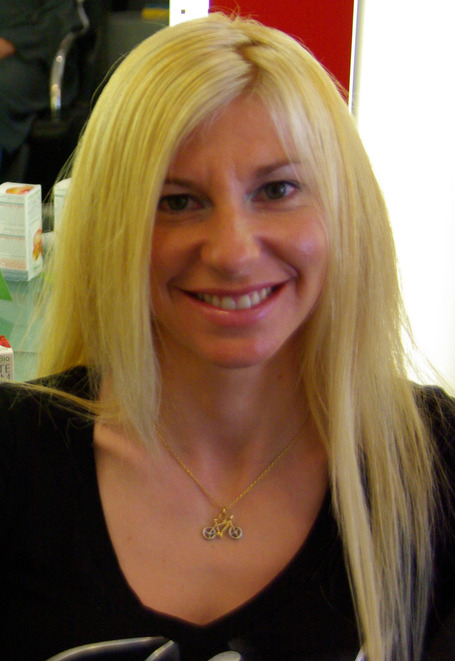 Last week we reported that Hitec had taken on one of the rising stars of 2011, Elisa Longo Borghini, and Polish climber Sylwia Kapusta, and they haven't stopped there!  Yesterday, the press release went out that they're adding French National Champion Christel Ferrier-Bruneau, a rider who any team would be proud to have on side.

This will probably be the biggest team Ferrier-Bruneau has ridden for, and I'm not sure why, as she's one of those riders who will always try to get away, and lights up races.  Her road career started in 2007 with small French team Les Pruneaux d'Agen which morphed into Team Lot-et-Garonne, then in 2009 she signed for Nicole Cooke's short-lived Vision 1 project, and after that, moved back to a French team Vienne Futuroscope.  In 2011 she raced for Gauss, and had her best season so far, coming 2nd overall in the hilly Tour de l'Ardèche and 11th in the World Cups Trofeo Binda amongst over great results, but her palmares don't show her impact on races - she's definitely not a rider to sit happily in the bunch, waiting for a sprint finish, and will always fight to make a race more challenging.

Stef Wyman summed up Ferrier Bruneau well:  "She is a true all-rounder who lives for instruction, information and tactics - she can react in a second and can push herself to limits not possible by others.  She's class."

These three Hitec signings signal a different direction for the team.  They've been built around Emma Johansson, with a team of predominantly young, Norwegian riders who have been able to get experience competing in the small races as well as the huge ones - but with these new signings, there should be less pressure on Johansson, especially as each of the new three are definitely riders the peloton will sit up and take note of.  There are fun times ahead!  In the meantime, follow Ferrier-Bruneau's adventures in Cyclocross over the winter on her website...

On the sad side, Australian climber, Ruth Corset, has announced her retirement.  Corset, who came 6th in this year's Giro Donne, including 3rd place on the mountainous Stage 8, has ridden reduced seasons with Team Australia, as she has two young children back home in Australia and so has spent short trips in Europe for key races (where she has had great results, especially in the hilly races).  It is always hard for the Australian riders, and juggling pro cycling with a family seems so much harder for the women riders than for the men, so it's not surprising Corset is choosing to retire.  She definitely leaves on a high, however, with that Giro result - and it must be a good feeling for riders to leave because it's their choice, rather than through injury or lack of options.  I wish her all the best for the future, whatever she chooses to do next - good luck Ruth, and thanks for enlivening the racing!

In track news, reigning Olympic Individual Pursuit Champion Rebecca Romero has announced she is taking herself out of contention for the 2012 Olympics.  Romero is one of about six British riders competing for three places on the Team Pursuit squad, and it's not too much of a surprise that she has pulled out - there's a nicely detailed (if possibly a tad biased) article on some of the reasons why in The Guardian.

Rabobank (Nederland Bloeit) have announced that they've signed Roxane Knetemann, the 24-year old daughter of former World Champion and joint holder of the most TdF stages won by a Dutchman, Gerrie Knetemann.  Knetemann rode half the 2011 season with Skil-Koga, and the second half with Batavus - she'll be joined at Rabobank by Australian Crit Champion and u23 ITT Champ, Lauren Kitchen.  EDIT!! And Liesbet de Vocht and 17-year old Rebecca Talen!  De Vocht moved from Nederland Bloeit to TopSport Vlaanderen last year, but it's great to see her back - and it seems like Rabo will be an intriguing mix of (very) experienced and (very) new young riders.... it's reminding me of Nederland Bloeit 2010, when every rider on the team won at least 1 stage/race, and I like it!

(It seems like we've only heard about riders leaving TopSport for 2012, and I keep seeing suggestions that yet more are going.  That's always an interesting sign, especially for a well-funded team like TopSport, with an aim of supporting riders to the 2012 Olympics....)

Irene van den Broek (formerly AA Drink-Leontien.nl) and Lieselot Decroix (TopSport Vlaanderen) will join Martine Bras at Dolman's Landscaping.  It looks like Van den Broek's AA Drink team-mate, Linda Villumsen will also be leaving - Wielerland report that Villumsen has been linked to GreenEdge, and that Chantal Blaak was approached by Rabobank, but has chosen to stay at AA Drink with Kirsten Wild, Lucinda Brand and Marijn de Vries.  It will be interesting to see what happens to AA Drink - this year they had a lot of riders, and so far we've heard about riders leaving, but no new signing, yet...

Basque fans should be happy that Eneritz Iturriagaetxebarria Mazaga is renewing with Lointek for another year - yay!  We keep the Basquest rider in the peloton!!!

And Café readers should be especially pleased to hear that Horizon Fitness-Prendas Ciclismoo will be returning again in 2012.  They'll be aiming to repeat their mix of riding the UK season and as many international races as they can get the invites for.  It sounds like Olympic hopefuls Dani King (current Team Pursuit World Champion) and Jo Rowsell (Team Pursuit World Champ 2008 & 2009) are staying for 2012,  which is even better news -  although the Olympics will certainly shape the look of the 2012 team and race programme.   Regular readers will know I'm a big fan of the team - but don't take my word for it - read about their fabulous 2011!  Not bad for a small UK team run on a shoestring!

Other things you might be interested in:  Junior World Champion Lucy Garner interviewed by VeloUK - on how she got to the Worlds, and how it feels to be Champion; and Garmin-Cervélo's Carla Ryan talks about her 2011, the problems she had in the first half of the season, and how very, very happy she was to ride the Worlds for Australia!

And although I fanposted this, it's worth repeating...  Marianne Vos is currently in Bhutan, for an international sports exchange programme that is part of the celebrations of the Bhutan royal wedding.  Vos has been running some cycling workshops with young people, and has been posting some very happy tweets - but I don't think anyone will be surprised to see that when she was in Delhi, she couldn't just ride in a rickshaw, she had to get on the bike as well!  Of course she did - this kind of thing is one of the many reasons she has so many fans!