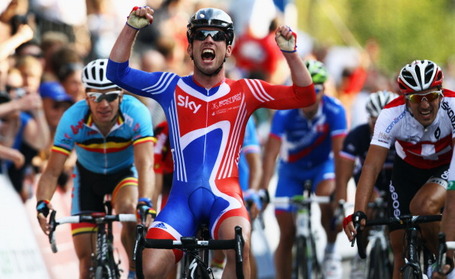 Team Sky has announced today that Mark Cavendish will ride for the team in 2012. The announcement comes after months of speculation about the British sprinter's future, speculation that escalated after he won the World Championship road race in Copenhagen. Rumor suggested that Cavendish had signed his new contract as far back as the Tour de France, but more recently, media reports suggested he might race for Quick-Step instead.

The rounds of will-he or won't-he prompted Gerard Vroomen to quip that Cavendish and Team Sky should just get a room already. Now, it's smiles all around as one of the top British riders joins Britain's Pro Tour team with the London Olympics next year.

Team Sky also announced today that Bernhard Eisel will also ride for the team next year. Eisel has ridden as road captain with Cavendish at HTC-Highroad, and played a central role in organizing the team's fearsome lead-out train. Eisel will ride in support of Cavendish at Team Sky, though he also hopes to try his own chances during the spring classics.

Dave Brailsford, Team Sky Principal, said on the Team Sky site: "Mark is the greatest sprinter of his generation and is well on his way to becoming the greatest of all time. He is a rider of exceptional talent who has proved his pedigree at the very highest level of our sport.

"Mark is a born winner and what excites me most is the attitude he brings to all the teams he rides for. We want to inspire more fans to get into cycling and I can think of no one better to help us do that. We are delighted that the new world champion will be riding for Team Sky next season."

Arguably the most successful sprinter in the sport, Cavendish has won 20 stages at the Tour de France. The 26 year old counts three straight victories in the prestigious Champs Elysèes stage, and in 2011, he won his first ever Green Jersey. Cavendish has also won the points competition at the Vuelta a España. In 2009, he took a narrow win over Heinrich Haussler at Milano-Sanremo.

Like many top British riders, Cavendish began his career on the track, and his first international result came in 2005 when he won a World Championship title with Robert Hayles in the Madison. At the Beijing Olympics, Cavendish and Bradley Wiggins failed to win an anticipated Gold Medal in the same event.

Since Beijing, Cavendish and Wiggins have had a difficult relationship that only recently improved. At the Copenhagen World Championship, Wiggins played a key supporting role in Cavendish's victory. In the press release today, Wiggins said he was looking forward to riding with Cavendish at Team Sky, though the sprinter's presence on the team may complicate the chances of Wiggins at the Tour de France.

For his part, Eisel is happy to be following Cavendish to Team Sky after the dissolution of HTC-Highroad.

"The fact that I wanted to stay with Cav was also a major factor and we’re both happy that we will now have more years ahead of us.

"My main job will be keeping him protected leading into the sprints, but the spring Classics are also very important to me and I’ll be looking to ride well in them. If I can secure a ride in the Tour de France that will be great as well. I have ridden the last eight Tours and finished them all, and next year is my 12th season as a professional so I’d like to think I have the experience to be able to contribute to the team."

Currently 30 years old, Eisel turned professional with Mapei in 2001. Though he devoted much of his time at HTC-Highroad to supporting Cavendish, Eisel scored a big victory of his own in 2010 when he won Gent-Wevelgem.

...Phew... I was sooo dying from the suspense of this one.