Not that this is news, per se, but it's time to bore down on the details of this Saturday's season-ending monument, the Giro di Lombardia. While no monument seems safe from tinkering, sometimes major tinkering, the Giro di Lombardia is distinguishing itself in this respect. Last year, after a few relatively peaceful years of course designing, the organizers changed the start location and inserted the Colma di Sormano, a beastly climb, between the venerable Madonna del Ghisallo and the finish. This year things got even trickier, with the finish moving from Como to Lecco, clear across the lake. Climbs are reshuffled, endings rewritten, lives turned inside-out... you can see where this is going. 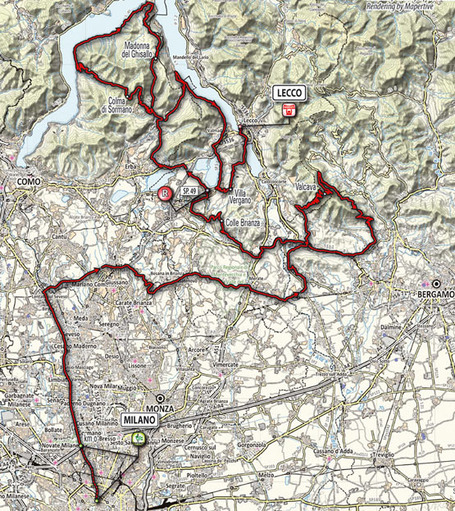 And the climb data: 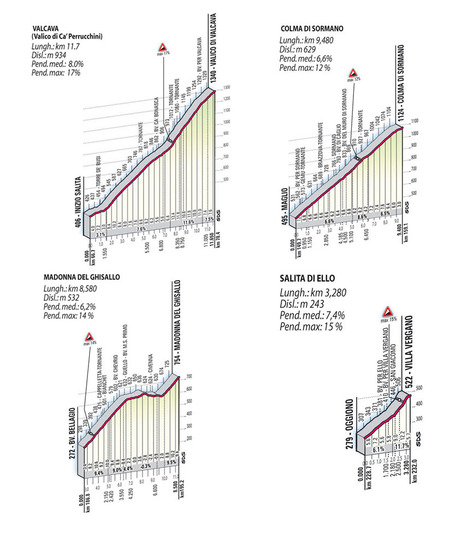 Click to embiggen.  Race organizer Michele Acquarone has taken control at RCS from Angelo Zomegnan, and seems intent on restoring balance, or at least he used that word a lot in the one interview I've seen. To that end, the Lombardia course actually regains one of its signatures while reshuffling the very end. The Colma di Sormano is still there, but comes before the Madonna del Ghisallo, swapping the relative importance of the two climbs and returning the Madonna to her past glory.

Switching the finish to Lecco may have had something to do with that, although historically the race had no trouble finding Como straight from the Madonna. But the new ending does come with its own nasty surprise: the Salita di Ello, a 3km brute topping out a mere 9km from the finish, and dropping off the riders after the descent a mere 3km from the line. Historically the San Fermo della Battaglia was the last obstacle, a relatively straightforward 8% climb for 2km. Nothing to sneeze at for you and me, but to the pros, well, it didn't stop Andrea Tafi from winning in 1996.

In fact, none of the storied ascents stopped il Gladiatore that year. OK, maybe it's best not delve too deeply into results from the 1990s and all the muck implied, but this did used to be a race where the generic classics guys, the same ones who went well in Flanders and MSR, stood a chance of winning, albeit not a great one. No fewer than a dozen riders have won both the Giro di Lombardia and Paris-fricking-Roubaix. This truly elite list includes climbing beasts like Hennie Kuiper, Roger De Vlaeminck, Rik Van Looy and Francesco Moser. OK, sure, they all were strong enough to get up and over some decent hills, but none of them was famous for their climbing prowess.

The course as it stands today might not give anyone from the Paris-Roubaix podium much of a chance. Double-winner Gilbert is probably the closest to a "generic classics guy" that you'll see on Saturday [Reminder! The race is Saturday!], and the fact that he dominated the field last year breathes hope into the idea that the combination Sormano-Ghisallo hasn't turned this into La Fleche with a longer route and better food. Last year's top 20 featured almost exclusively the climby set, with guys like Greg Van Avermaet a full 6' back. But that was just a single data point... and a cold, wet, miserable one at that. Only 34 guys finished. Give the Sormano-Ghisallo combo a couple years to gel before we tell Alessandro Ballan and Filippo Pozzato to go mining for points in Beijing instead.