Share All sharing options for: Il Lombardia: Swiss Shocker as Zaugg Sneaks Away 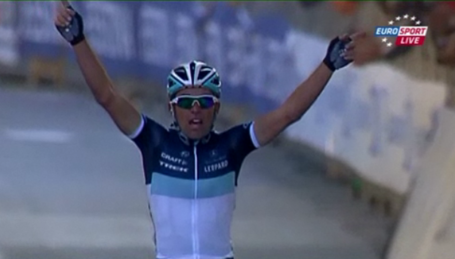 Oliver Zaugg of Leopard-Trek shocked the peloton with a solo victory in the Giro di Lombardia today, accelerating alone on the final climb to Villa Vergano and holding off the star-studded chasers for the win. Zaugg came into the day unheralded and working for Jakob Fuglsang, but his attack didn't provoke much response over the top of the Salita di Ello climb, and Zaugg descended to the line with his gap intact, holding off Daniel Martin of Garmin and a group of five others by eight seconds. The Swiss veteran had never come higher than 19th in the Falling Leaves before today, but seemed to like the new route and its late climbing demands.

Vincenzo Nibali enlivened the race considerably with a devastating attack on the Madonna del Ghisallo, putting over a minute into the field, which was minus Gilbert and a few other attackers until they slowed up near the top. That gap grew to about 1:45 and Vinny stayed out there, in heroic fashion, or so it seemed until about 20km to go, when his gap went from 1.17 to 0 in a few km. He sat up to absorb the inevitable at 16km to go, just 3k from the start of the final climb. He was out the back when the road turned up again.

Some 40+ riders started the climb to Villa Vergano, with Sky and Katusha heavily represented on the front and Gilbert parked on the wheels of his future BMC teammates. Gradually the pack thinned, as guys like Cunego and Sanchez dropped off and Zaugg took a dig up front, with little response. Gilbert didn't look great over the top as Dan Martin, Domenico Pozzovivo and Joaquim Rodriguez finally got into the chase of Zaugg. Gilbert joined a third chase group with 6km to go but it didn't have much organization, while a second group with Basso reeled in riders. Gilbert showed plenty of signs of stress in the final climb, and his defeat here is no accident. For once, he wasn't the strongest guy.

With 2km to go Zaugg still have 20 seconds, chased by Martin, Basso, Rodriguez, Niemiec and Pozzovivo. Martin led home the chasers but they never got closer to Zaugg than a few hundred meters. The win means the Leopard label goes out with a bang. Good day for Garmin too with Peter Stetina setting up Martin for an excellent result. Speaking of results: