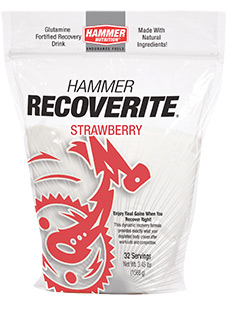 Last of the series... And it's a favorite topic of mine, nutrition. Unlike all the fancy steel bikes and carbon wheels, Hammer Nutrition makes products cyclists and other endurance athletes actually need!

Hammer Nutrition, out of Whitefish, Montana, has been around the cycling scene for a decade or so, and their products are pretty ubiquitous in the Northwest cycling scene -- and presumably out your way as well. Hammer are one of the many exhibitors at Interbike who cut across the athletic spectrum -- athletes of all stripes need nutritional help. But Hammer got their name from cycling. Every product I've seen has a chainring on it. They aren't just selling a general product to the cycling world at Interbike -- they're selling a message that their product is dialed in for Cycling.

I got a chance to talk with Steve Born, a multiple Race Across AMerica finisher and one of the head honchos at Hammer these days about one of my favorite topics: cycling nutrition that is actually something you might want to put in your body on a regular basis!

Sorry about the abrupt finish, camera battery malfunction. We actually talked quite a bit more about the purity of their whey protein, which is 100% whey protein isolate -- tough to top that. And we talked about the company's rejection of refined sugar, a complete departure from the bad old days of Gatorade and an important thing for me as a parent whose kids see sugared drinks all over the place and are curious about that stuff I put in my bottle. Their aversion to sugar is, um, a work in progress, which has the curious effect of increasing my aversion to it. Thankfully, while plenty of sports drinks still take the easy way out, Hammer and others are offering cyclists plenty of good-tasting alternatives to sugary drinks. I've been a Hammer Nutrition user for about five years, with excellent results (well, except for the part where I don't train enough), and I've never gotten sick of any of the flavors. That's more than enough to keep me going.