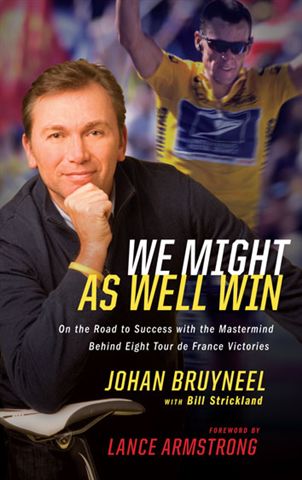 Seeing as last week's competition went down so well and I'm feelng a little bit too lazy to finish off the review I was working on, time for another competition.

This time out we've teamed up with our friends in Mainstream, the UK publisher's of Johan Bruyneel's We Might As Well Win (now available in paperback). The book, as you know by now, is something between Sun Tzu and Who Moved My Cheese. Or, more simply, the motivational, planning and administrative secrets of Johan Bruyneel. If you didn't know that, read the review (and check out the interview with Bruyneel's ghost, Bill Strickland).

So what you gotta do to win We Might As Well Win? Nothing. Well, nearly nothing. Simply comment below (or send a Tweet using the hash-tag #PdCBruyneelComp) and your name will go into Serendiptity's hat. Once your name's in the hat … it could be you (but remember: if you're not in, you can’t win).

You've got til now and the end of the weekend to get your entries in. On Monday afternoon we'll pull a name out the hat and work out which courier pigeon will have to be dispatched to get Bruyneel's book to you (note: the courier pigeon is not part of the competition prize – we want it back this time). Simple as that.

Well … not that simple. Let's complicate it. Just a little. Don’t fret, we're not going to embarrass you (or us!) by getting you to fail to pick the winner of yet another bike race. That's a lesson well learned at this stage, both at the Tour de France and the Giro di Lombardia. But, seeing as We Might As Well Win is about lessons Johan Bruyneel has drawn from his own life in cycling, we'd like you to share some of the lessons cycling has taught you.

Usual small print. Judges' decision final. No appeals. No bribing the judges (though attempts would be appreciated).

Check back here on Monday to see who the lucky winner is. Or tune in on Twitter Monday afternoon.