Now I don't think anyone involved in the Podium Café women's Virtual Directeur Sportif game have ever described ourselves as "experts" on women's cycling, so you might look at the riders in this edition of my sporadic Top Trumps series, and ask "what were they thinking??" - because this one covers those riders we missed out of the game who have had road success this year.  We might have missed them because they previously were based only in the USA, or we thought they were trackies - or in one case, had a long, brilliant career, but didn't we expect her to come back - or because this was their break-through 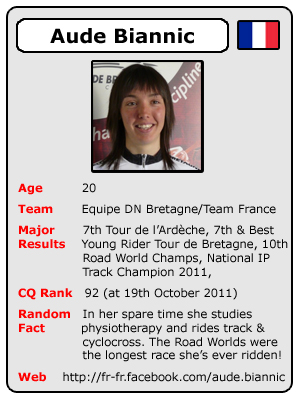 season.  In any case, these are some riders I know I'll be looking out for next year!

In recent years we've seen new French riders joining the senior ranks who have some excellent results. This year's new star is 20-year-old Aude Biannic, who we've seen in some of the big races riding for the French National Team.  She started racing at 8 years old, following her brother into the sport.  In 2009 she came 2nd overall in the Omloop van Borsele junior women's stage race (always a great place to look for future talent) and last year was 5th in the European Championships u23 Road Race - and this year she's taken another step up.  She won the Individual Pursuit in the French National Track Championships, but with the IP gone from the Olympics, is focussing on road racing, where she's had some great results, starting with 15th in the Trofeo Binda World Cup and winning the Best Young Rider jersey at the Tour de Bretagne.

In 2010, she was offered a place on both Vienne Futuroscope and GSD Gestion, but she preferred to stick with the DN Bretagne - and before the Worlds, she said her plans are to ride for them for one more season and focus on the World Cup races - and on her physiotherapy studies - but I'd love to see her signed to a bigger team at some stage.  I can't fault her for putting training for a career over cycling - but I can't wait to see if she can live up to her promise!  In the mean time, you can find out more about her by reading these interviews with her on Velochrono.fr

More new (and "new"!) riders below the jump!  And if you want to highlight any names that were new for you this year, add them to the comments! 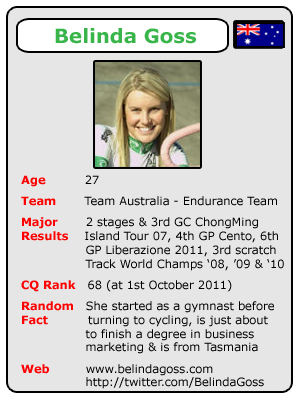 I don't blame anyone for missing Belinda Goss in predictions, because she's much better known as a track star - coming third in the Scratch race in the 2008, '09 and '10 Track World Championships and winning the Scratch in the UK round of the 2009/10 Track World Cup.  She has form on the road too, winning 2 stages and coming third overall in the sprint-tastic Tour of ChongMing Island stage race in 2007, and she races in the Australian domestic scene - but this year she rode in Europe with the Australian National Teams Endurance team (yes, at some stages there were two separate Australian national teams riding in the same European races!) and did well in the sprint races as well as in cobbled races like Drentse 8 Dwingeloo and GP Dottignies.

Goss, who's from Tasmania, started out as a gymnast before turning to cycling, and says her earliest memory is falling off a neighbour's bike at age 5, and if she wasn't a cyclist, she'd be a snowboarder or a marketing executive of a world famous fashion label.  She's one of those busy riders on and off the bike - she's just about to finish a degree in business marketing, and writes columns for Bicycling Australia - in this one she talks about moving focus her to the road.  You can find out more about her through her very happy twitter and her website - and watch out for her as the track season starts, especially with the 2011 Track World Cup in Melbourne, and the Olympic Games.... 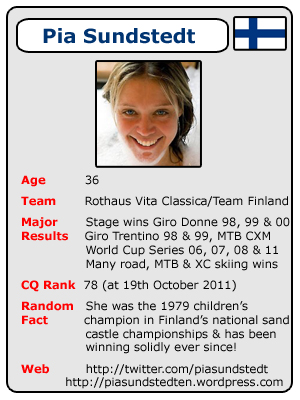 The next rider doesn't count as a "new" name - but people new to women's cycling might not remember her.   Pia Sundstedt says she grew up on cross country skis, and moved to cycling at age 18, racing duathlon and coming third in the European Championships in 1993 and 1994, and was a professional road racer between 1996 and 2002.  Her road palmares are fantastic, with stage wins in the '98, '99 and '00 Giro Donnes, winning the overall Giro del Trentino in '98 and ''99 and a second place in the 1999 Road World Cup series, but she decided to stop and finish her degree in Political Sciences, before moving to the mountain bike, specialising in Marathon.  She has many, many victories in cross country and Marathon races - including the insanely hard Trans-Alp and Cape Epic races - as well as in Cross Country Skiing - just look at her palmares!

In 2011 she scored 78 CQ points - or 230 in vds - which might not sound much, but this is someone who only started road racing at the Tour de l'Ardèche in September! And she was one of the few European riders to race the Golan races in Syria - you can read all about her Syrian experiences on her blog.

She's one of those fabulous riders who you can follow in many ways - through her blog, which she writes in English, German and Swedish as well as Finnish, on her twitter and through her lovely flickr.  And of course, you have to love a sports person who lists the fact she was the children's category Finnish champion in sandcastle building in her palmares! 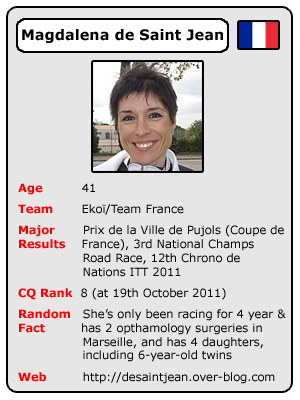 Now, you might think that at 36, Sundstedt will be the oldest "new" rider of this post...  but just as there always seem to be new young French riders appearing, they also have a tradition of women racing who are older than the average...  Step forward one of my favourite new names of the year, Magdalena de Saint Jean!

She appeared on the VDS radar in April, when she won the Prix de la Ville de Pujols round of the Coupe de France, beating riders like Christine Majerus, Pauline Ferrand-Prévot and Edwige Pitel.  She mostly rode the French domestic season, coming 3rd in the French National Road Race Championships, and finished the season with a 12th place at the Chrono de Nations ITT.

But the real reason we like her is her story.  She started racing 4 years ago, at age 36, after a friend introduced her to cycling. Off the bike, she's an opthamologist with a formidable CV and the mother of four daughters including six-year-old twins, and while, unlike the other riders featuring in this post, I doubt she'll be winning international races in the coming years, she seems to have a real joy about her riding, and the adventure she's having, and that's lovely to read about.  I'm pretty sure that Google Translate doesn't do this justice, but I loved this line from her website:

It's always fun to find out about the riders to look out for who might turn out to be future stars, but it's also inspirational to see new riders tearing up their domestic scene and loving what they're doing.  Massive good luck to Magdalena, I hope the adventure continues!

American Jackie Crowell rode in Europe for the first time this year, coming 20th in the Ronde van Drenthe and looking great in the Tour of Bretagne....  until she fractured four vertebrae riding the ITT Stage 2....  and still finished 4th overall!  And then rode and finished the Tour of Limousin!  Now that's hardcore!

Crowell is just 23, and I'm sure people who follow the USA domestic scene will recognise her name, as she's the 2009 National u23 ITT Champion and this year won a stage of the Tulsa Tough.  She blogged all about her cycling experiences, with photos, and she tweets as well, just as we like - here's to a fast and pain-free recovery, and all the best for her future!

The youngest rider in this post is not even 18 yet.  You might remember Thalita de Jong from her 4th place in the Junior World ITT, and from attacking her heart out in the Junior World Road Race.  Although none of her attacks or chases could last until the end, and she finished in 39th, she did not go un-noticed, and she was snapped up by the Rabobank Womens' Team who, in their former incarnations as DSB and then Nederland Bloeit, have a great history of developing young riders.  She was the Dutch junior ITT Champion this year....  and there is always a LOT of competition in the Netherlands....  She might be a bit young to expect huge things from, but watch out for her in the u23 European Championships 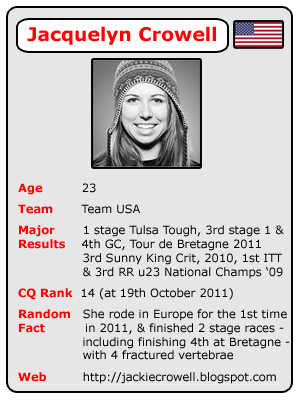 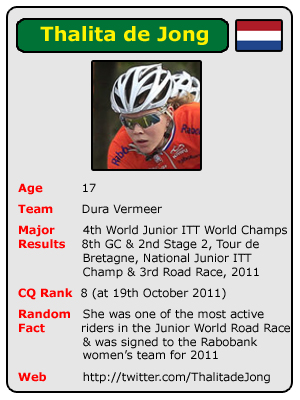 So those were MY new riders from this season.....  who are yours?  And up next, riders from the country everyone should be watching out for come the 2012 Olympics - Canada!