Share All sharing options for: Cyclocross World Cup Round 2: Tabor........LIVE!!!

It's the second round of the CX World Cup, and here's what GS had to say about Tabor in her fabulous CX calendar:

A week later, and we're still in the Czech Republic, Tabor this time. Again, let's cross our fingers for snow and ice and lots of slipperiness. Without it, Tabor is a rather fast race, which means it favours the guys who are powerful rather than technical (read: Niels Albert). Two seasons ago, Tabor was host to the world championships, and back then Zdenek Stybar - damn that Czech boy - won the first of his two consecutive rainbow jerseys. Last year it was organised as the first Radomir Simunek sr. Memorial, after the father of current BKCP-rider Radomir jr. Radomir the elder was the world champ cyclocross in 1991. He passed away in 2010, at the age of 48.

If we're racing the same parours as at the world champs there are some hills, but nothing too nasty (although one is directly behind a u-turn, which is sort of mean). What else? Stairs, corners, beams and a bridge. But let's hope for snow and ice anyway.

It looks like there's no snow and ice - but below the jump I'll give you some more information, but coverage starts at 14:30, the race starts at 15:00 CEST 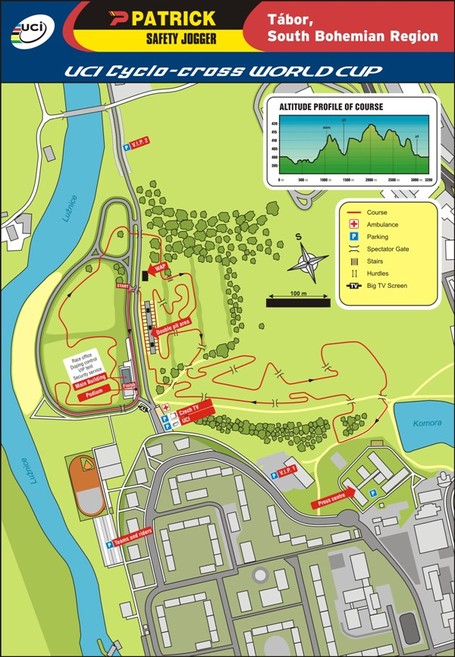 Here are the startlists - and if you'd like to know more about the elite men and how to spot them, check out gsgirl's "Who's Who".  On the men's side, Sven Nys got off to a fantastic start winning Round 1 last week - and apparently has had an intervention from his sponsors, so hopefully will have no more of those (endless, random, completely insane) mechanical issues - but World Champion Zdenek Stybar will be wanting to win on home soil - while Niels Albert, who got blocked by a tv camera at the start of last week's race, will want to show what would have happened if he had got the start he'd wanted.

On the women's side, Katie Compton won in Plzen, but flew back to the USA to celebrate her brother's wedding, and won't be back in Europe until November.  Watch out for the two Cezchs, though - Pavla Havlikova and Katerina Nash.  Nash may be based in the USA these days, but that home-soil glory still calls!

There's lots more information about the race, and recent cx news on the race website - but I know what you really want - streams!  Check out CyclingFans, Procycling and Sports-livez.  And anyone new to Cyclocross - feel free to ask any and all questions in the thread, we love sharing the love!