Share All sharing options for: Cyclepedia, by Michael Embacher 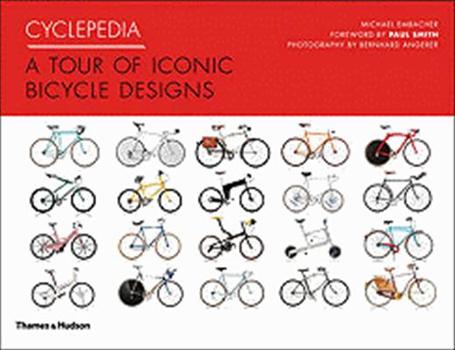 Title: Cyclepedia: A Tour of Iconic Bicycle Designs
Author: Michael Embacher (with Michael Zappe and Martin Strubreiter; photography by Bernhard Angerer, foreword by Paul Smith, translated by Roderic O'Donovan / Brainstorm)
Publisher: Thames & Hudson
Year: 2011
Pages: 224
Order: Thames & Hudson
What it is: A lavishly illustrated and beautifully produced peek into the world of bicycle design.
Strengths: Pictures speak louder than words and Cyclepedia is packed brimfull of some beautiful pics.
Weaknesses: It's a quirky selection of bikes, sometimes a bit all over the house as it jumps from this to that with the joining thread simply being that bikes are cool.

In 1893 Josef Fischer rode from Vienna to Berlin in a time of thirty-one hours. The 580 kilometres had been ridden the year before by Count Starhemberg, on horseback, in a time of 71 hours 35 minutes. Baron von Drais' hobby-horse had finally grown up and was beating the real thing. In 1900 a motorcar - a Bollée - covered the same route in a time of 26 hours, just five hours faster than Fischer. Cars have come a long way since then, but so too has the humble bicyle.

The humble bicyle. I do love that phrase. The bicyle is the biggest braggart I know. Totally full of itself. And in Michael Embacher's Cyclepedia, the bicycle sheds humility and struts its stuff like a catwalk model, shaking its booty and preening and posing for the camera as Embacher whizzs through a century of bike design with more than 450 pics and just shy of a hundred different bikes. The earliest dates from 1922 (Labor's Spécial Course), the most recent from 2010 (the Pino Tour, from Hase Spezialräder). Probably about half the bikes date from the last thirty years, when bicycle design woke up, became popular and profitable. The book's inventory breaks down into cargo bikes (2), folding bikes (24), kids' bikes (4), mountain bikes (5), urban bikes (26), touring bikes (19) and racing bikes (38) along with a few tandems (4), single speeds (10) and curisoities (35).

Let's take a look at a couple or three of Embacher's picks. 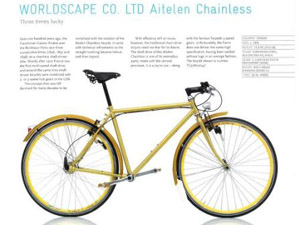 The Aitelen Chainless (Worldscape Co Ltd, 1992) weighs in at 15.8 kg with a  5-speed Sachs Pentasport hub gear, Shimano Deore LX brakes and - as the name suggests - no chain. It's shaft-driven, the pedals mounted where you'd expect to see them on a chain-driven bicyle. I can fix a puncture and disassemble a bottom-bracket (sometimes I can even reassemble one too) but undertsanding how a shaft-driven bike works is beyond my ken. It's got something to do with helical - then hyphoid - toothing, but you might as well be speaking Dutch to me for all the sense that makes (and my mastery of Dutch is quite shameful). Factoid for you: Gaston Rivière won Bordeaux-Paris on a chainless shaft-driven bike. Three times. 1896-1898. 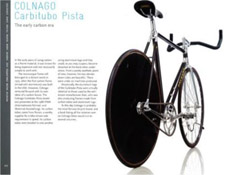 The Carbitubo Pista (Colnago, 1988) dates from the early carbon era (this is sounding more like geology than cycling, no?) and weighs in at 8.2kg. I think my mother's cooked turkeys for Chistmas that weigh more. It's a single-speed racing bike, built for speed. And, as Embacher notes, the carbon tubes (from Ferrari) were bonded using aluminium lugs and thus could (obviously) "become detached at the bond when under stress." (D'oh!) Aesthtics though trump reliability, with Embacher drawing attention to the "two slender down tubes." 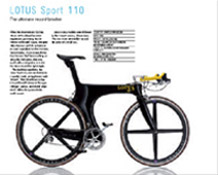 The Lotus Sport 110 comes from the early nineties and benefitted from the UCI's relaxation of the strict rules governing frame design. It was Mike Burrows' monocoque carbon composite frame what won the bangles and baubles for Chris Boardman and Team GB at the Barcelona Games in 1992. The version Embacher details comes from 1994 and weighs in at 9.2kg with a Shimano Dura-Ace groupset. It's atcually described as the 'street' version of the bike Boardman rode, with a price compable to that of a small car.

That's just three of Embacher's picks, chosen as much because I had suitable illustrations to give you an idea of what Cyclepedia looks like. But it gives you an idea of the layout and the content.

As Bella Bathurst accurately noted in her recent The Bicycle Book, cycling is made up of many tribes. It's not so much that cyclists can be pigeon-holed, we all tend to belong to multiple tribes at the same time. One tribe though I've never managed to become a part of is the gear festishist. I've just never been one of those cyclists who could get excited about a derailleur or an inner ring. I'm not someone whose knees go weak and belly turns to butterflies when he sees a super-cool, super-sexy frame. I can appreciate the aesthetic pleasure of these things, but I just can't get excited about them. I've just never got off on bike porn. I guess I'm just weird.

What is interesting about Cyclepedia is to watch the visual evolution of bike design, particularly from the late seventies forward. I would have appreciated some more wordage on the individual bikes, something beyond the 36-24-37 runway stats but I guess I'll leave that for a more wordy book. This one, quirky and all as Embacher's selection of frames is, is certainly visual fun. Enough to make me reach for the Kleenex? Not quite.