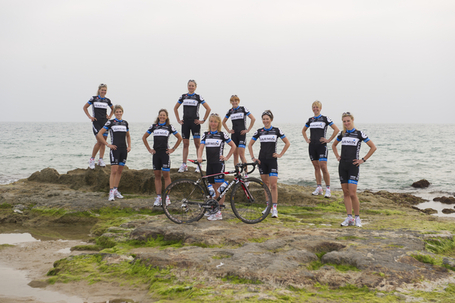 The 2011 Garmin-Cervélo women's team poses during their early-season training camp in Calpe, Spain. Nine of the riders here will return to the team next year. Photo: Lucas Gilman/Garmin-Cervélo.

The Garmin-Cervélo women's team will look very similar in 2012, and will again have a roster of ten riders. I had a chance to chat briefly with team sports director Theo Maucher over email, and he confirmed that nine riders from the current roster will continue on with the team for the coming season. They all signed two-year contracts at the beginning of the 2011 season.

The nine returning riders include: Lizzie Armitstead, Noemi Cantele, Jesse Daams, Sharon Laws, Lucy Martin, Emma Pooley, Alex Rhodes, Carla Ryan, and Iris Slappendel. Trine Schmidt did not receive a new contract from the team. Garmin-Cervélo is looking to sign one more rider for the coming season. "We will announce the new rider as soon as possible," said Maucher.

The 2012 team includes three national champions: Lizzie Armitstead of Britain, Alexis Rhodes of Australia (though the Aussie Championship comes early in the 2012 season), and Noemi Cantele of Italy. Notably, Cantele won both the road race and the time trial at the Italian National Championships.

Though injury derailed a significant portion of her season, the Garmin-Cervélo's super-climber and former world time trial champion Emma Pooley finished second and won a stage at the Giro Donne, took out a World Cup win at the Trofeo Alfredo Binda, and won the overall at the hilly late-season French stage race, Tour de l'Ardèche. Lizzie Armitstead, meanwhile, won stages at the Tour of Chongming Island and at the Thüringen Rundfahrt.