Share All sharing options for: Cycling Heroes, by Les Woodland 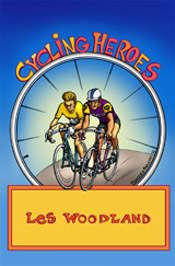 Title: Cycling Heroes: The Golden Years
Author: Les Woodland
Publisher:McGann Publishing
Year: 1994 (updated 2011)
Pages: 166
Order: Bike Race Info
What it is: One man, a tape-recorder and a dozen-and-a-half interviews with, or stories about, some stars from a bye-gone age.
Strengths: You get the story straight from the horse's mouth, the men - and two women - who were there, inside the peloton. No matter how much the sport changes, the most important voices come from within the peloton.
Weaknesses: The sport then and the sport now seem so different that, I'm sure, some will question why such voices from the past need to be resurrected.

Back in the nineties, Les Woodland loaded up his trusty old Carlton and set out to track down some of his own personal cycling heroes. Men (and two women) from an era when, for British cycling fans, Jock Wadley was Phil Liggett, Network Three was Channel Four and Tom Simpson was Mark Cavendish (Milan-Sanremo winner and World Champion).

The book Woodland pulled together containing those interviews, Cycling Heroes, was first put out in 1994. Somewhere along the line I picked up a copy of it, a somewhat large-format hard-covered affair, with plenty of pictures illustrating the stories Woodland told. It's sat on my bookshelf a long time I guess, and every now and again I've had cause to take it down to check something or find a suitable quote. It was definitely worth whatever price I paid for it.

A couple of months back, Bill McGann of McGann Publishing - the people behind the recent The Story of the Giro d'Italia, among other books - mailed me to say that Woodland's book was back in print, this time in a more conventional paperback size. As well as being stripped of its pictures (a loss you can live with, now we've got Google Images) a few of the original interviews have been pulled and replaced with interviews there wasn't originally room for first time round. So even if, like me, you know the book of old, the new edition is new.

I imagine that, at this stage, most all of those names are familiar to you. Coppi and Anquetil? Gods of the sport. Bobet and Bahomontes? Champions. Simpson? Angel with feet of clay. Elliott, Hoban, Robinson and Webb? Pioneers. Post? Directeur sportif par excellence. Burton? The Jeannie Longo of her day. Let's pick a name that most are unlikely to be familiar with: Keetie van Oosten-Hage.

World pursuit champion 1975, 1976, 1978 and 1979. Twice in eight years the world road race champion. Another four silver or bronze bits of shrapnel from various world championships. Winner of the Schlitz Light International in Tucson, Arizona. (Who even remembers the Schlitz Light International in Tucson, Arizona, let alone who won it?) Certainly Van Oosten-Hage sounds like someone worth talking about, no? So one day Woodland phoned up the Dutch cycling fed, the KNWU, looking for a contact number for Keetie van Oosten-Hage. The reply came back down the line: "Keetie who?"

Undeterred, Woodland gets an address from another source. As he pulls up outside the Van Oosten-Hage house in Kloetinge, a suburb of the Zeeland town of Goes, Jo de Roo rides past in a yellow track top and watches Woodland dismount. There's something almost charming about a cycling journalist actually cycling to an interview. I don't fully understand why I think that, but I do.

Woodland's interview with Van Oosten-Haage isn't particularly revelatory in a major way. But what makes it worthwhile is what it reveals of a former star, who even back in the day, was happier to not be the star:

It's something we just never stop and think about, isn't it? Cycling has always been about selling things, we just assume that cyclists are happy to be spokes-people for the sport. That they might be camera-shy ... it doesn't fit the myth.

By the time Woodland caught up with Van Oosten-Haage in the 90s, the world had moved on. Racing was a past life. The bike was a past life. The notion of a multiple world champion not riding a bike, how easy is that to accept? Yes, Anquetil swore he'd never ride a bike again once he hung up his racing wheels, but, well, that was Anquetil. But here's Van Oosten-Haage, explaining it to Woodland:

"I miss it a bit, I suppose, although not racing - I don't miss that. I don't even go and watch races. Well, maybe one or two [...]. I've still got a few contacts, but not so many these days, of course, because they get fewer. And there is a kind of reunion club for retired racing cyclists, but that's about all I do. But if the weather's nice, I miss getting out on my bike. I rode Liège-Bastogne-Liège, and I had to do a lot of training for that, but afterwards I didn't do a thing. I stay home and do a bit of running sometimes, but that's it."

Any regrets? "I would love to have ridden the Tour Féminin." I love that, myself. A woman who doesn't miss racing, a woman who never particularly enjoyed being center of the biggest stage, and what does she miss? The biggest stage race she could have ridden.

The latter - deals - produces a funny exchange with Peter Post, Woodland trying to ask him about the Blue Train, which basically fixed the result in Six Day track races, and Post thinking Woodland is talking about something else. Pressing a man like Peter Post on a thing like race-fixing ... well look, even before his death earlier this year, few were willing to press Peter Post on a thing like race-fixing.

Post was one of the biggest directeurs sportif of his time. TI-Raleigh and then Panasonic. He was one of Jim Ochowicz's inspirations when Och set up 7-Eleven. To be reminded about a man like Peter Post - even if only a little but about a man like Peter Post - well that's one of the reasons I've found myself taking Cycling Heroesdown from my bookshelf so many times over the last few years. And one reason why you might want to put it on yours.

One issue some might have with Woodland's choice of characters to talk about is that some of them have become too familiar. Anquetil and Coppi, Simpson, even Robinson and Elliott have all been the subjects of books over the last few years. In some ways, this just shows you how much the specialist cycling-publishing industry has changed in twenty years. Back when this book first came out, cycling books were rare things and hard to find. You relied on the whims of magazine editors to get the historical picture. And there, all too often, they all told the same stories.

So should maybe these guys have been dropped from the new edition of the book? I'll hedge my bets here. If dropping them would have freed up space for other, less oft told tales, I'd probably say yes. But at the same time, their inclusion is necessary for the bigger picture, for a better grasp of the world of cycling Woodland was drawn to. Because, while the most important thing about the book is that Woodland allows his heroes' voices ring out through the ages, Cycling Heroesis also a little bit about Woodland himself and that breed of British cycling fan who got sucked into the sport in those far-off days of Robinson and Simpson. As oft told as the tales of Anquetil and Coppi are, they are a part of Woodland's personal history. So that makes them worth including.

It's necessary to point out that Cycling Heroes occasionally contains errors of fact. Minor little things that really should be fixed. But here you have to remember that the book is a product of its time. There was no internet worth speaking about. Cross-checking facts was much harder. And, in a sport built on myth, facts tend to be slippery. And in a book built on the recall of others, things sometimes get a little bit mixed up. This isn't a major issue, doesn't detract from the stories the book tells. And you can always check the facts yourself if you ever need to rely on them.

I suppose what's central to Cycling Hero's is respect for the past and for the heroes of the past. A story about respect for you. Henri van Looy. Better known as Rik. Sometimes Rik II (after Rik I, Rik van Steenbergen). Or sometimes just the Emperor of Herentals.

In the sixties, Van Looy was a gifted sprinter. Sometimes he's credited with inventing the sprint train, the legend of his Red Guard - which once included Vin Denson- is that strong. In his day, he was like an Olympian god. Benoni Beheyt played Prometheus to Van Looy's Zeus in the 1963 World Championships, stealing the arc en ciel. Van Looy tortured him for years after until Beheyt finally got the message and left the sport. It's a tale you'll find in another of Woodland's books, The Crooked Path To Victory.It helps explain Van Looy. He commanded respect. And demanded it too.

It was when the respect died that Van Looy knew his day was done. Driving home from the 1970 World Championships - the year of Jean-Pierre Monseré, Jempi, star of a story Herbie Sykes told in Pro Cycling Magazine last year - Van Looy realised he'd had enough:

"I was tired of riding against snot-noses who, even if you took them all together, hadn't managed a fraction of what I'd achieved. And yet sometimes when they'd beaten me, I'd hear them saying 'Oh, we gave that old geezer a hard time today.' I couldn't take being called granddad. I was too good a rider for that. So above all else, I stopped because of the break of respect. In the last years I was lining up against riders who could have been my son. I had nothing in common with them. They were another generation.

"Physically, I could have gone on. The training was getting harder but I could still do it. But I couldn't take that disrespect. The big riders, the stars, they were different. They knew what I'd achieved and how difficult it was to do it. You can only know that if you've been in the closing phases of a Classic yourself, if you've done it yourself. And those little riders thought they could laugh at me."

One day, Mark Cavendish will line up against snot-noses who'll call him granddad. And, twenty years and more after he's hung up his wheels, I hope a journalist rolls up to the Manx-man's house one day, unclips himself from his bike, pulls out whatever the recording technology of the day is, and asks Cav what it was like in back in the day. If the story is half as good as some of the tales in Cycling Heroes, it'll be well worth reading.