Throughout my sporadic Women's Cycling Top Trumps series, I've looked at some of the big cycling nations - Italy, the Netherlands (twice!) and Australia - but the Road World Championships reminded me that I really should turn my attention northwards, as there's one nation that's practically guaranteed riders in at least one World top 10 every single year...  and this year had three in the Individual Time Trial top seven!  Yes, it's time to look at Canada, a country seemingly full of excellent women cyclists, with some amazing stories to tell.

The rider you might remember from her solo breakaway in the World road race is one who we haven't seen on the roads for a while - Clara Hughes.  She started as a speed skater, moving to track and road cycling in 1990.  After winning a silver medal in the 1995 World ITT Champs, and bronze medals in the 1996 Olympic road race and ITT, with many other fantastic results, she turned her attention back to the ice, winning Olympic bronze in the 5,000m in 2002, then gold in 5,000m and silver in the team 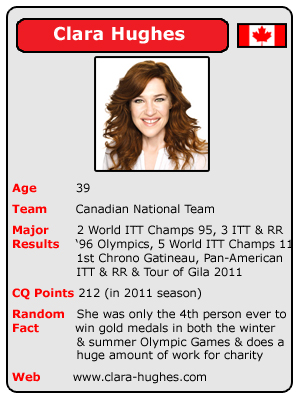 pursuit at the 2006 Turin Winter Olympics, and 5000m bronze in 2010.  She retired from the ice, but later that year announce that the lure of the Olympic flame was too strong for her, so she'd be back on the road, aiming to ride at London 2012.

Since then, she's demonstrated that she's back with a vengeance, with some fantastic rides, winning the Pan-American Road Race and ITT, Chrono Gatineau (remember how she crashed, got back on and won that race?) and the Tour of the Gila this year, before coming 5th in the ITT at the Road World Championships (here's a video interview with her just after the race)  For 2012, she's signed with Specialized-lululemon (the team born from the ashes of HTC-Highroad) - and with their track record of helping riders develop, I can't imagine what she'll do next year!

But that's not why I am such a big fan.  The thing that makes her special to me is that her sporting goals are just part of her.  I love her journals about her life, and her vision and philosophies on her website - and I love that she's been using her position to try to make a difference in the world.  After winning her gold in 2006, she donated $10,000 of her own money to Right To Play, and challenged businesses so they donated $400,000 as a result - and that's just a little drop in the ocean of her charitable activities, which include huge fund-raising, advocacy and direct work with communities.  I could probably hyperbolise about Hughes all day, but I'll stop with this - head over to her website and read about her - if you're not already a fan, you soon will be!

Now, you might think that with palmares and a track record like that, Hughes will easily get a spot at the Olympics next year.  But it might not be that simple, because superb as she is, there's another Canadian rider who has an even better record at recent ITTs....

If I were going to place a bet on the Canadian most likely to win an Olympic medal, all my money would be on Tara Whitten.  Unlike Hughes, Whitten is relatively new to women's cycling - she started racing seriously in 2008, after ten years competing in cross-country skiing, but she quickly made her mark, winning three silvers and two bronze medals in the 2008-9 Track World Cup season.  Since then, she's only moved up, despite 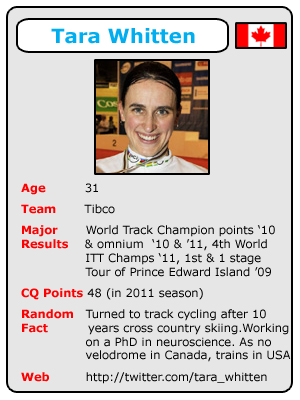 having to take time out in 2010 for elbow surgery following a mountain bike accident - adding two World Cup bronzes, 2 silvers and a gold to her tally, and winning the points race and omnium at the 2010 World Championships, and her second omnium world title in 2011.

And her progress on the road has been hugely impressive too - she won the overall General Classification and a stage of the Tour of Prince Edward Island in 2009, and in 2010 a stage of the Cascade Classic - but she's been focussing on the Individual Time Trial, where she has top 10s in the big standalone ITTs, a silver medal from the Pan-American ITT and gold from the Commonwealth Games (where she also won three bronzes on the track)....  but it's her World ITT Champs record that is most impressive - 8th in 2009, 7th in 2010, and 4th in 2011....

Whitten comes from a sporty family - as a child she used to watch her father compete in MTB races.  She's a high achiever off the bike as well as on, having completed 3 years of a PhD in Neuroscience (check out the description of her undergrad studies here and her PhD here!) - although she won't be completing it until after the Olympics - and her life is complicated by the fact there is no international standard velodrome in Canada, so she trains for the winter in Canadian Cycling's base in Los Angeles.  She really loves the sport though, saying in 2009:

I love the pure power of track cycling. I love the challenge of trying to be better. I love the freedom of being on a bike - you can explore so many places! I love that it is a lifelong sport that I will continue long after I am done competing.

To find out more about her, there's is a video interview from 2009 about how she got into cycling (& much more) and another just after winning the 2011 omnium, where she can't stop smiling (which seems to be characteristic of her!) - and here's an interview where she describes how she fell off the track at the first training session at her first World Cup and one where she talks bout how she thinks combining competing with studying has helped both parts of her. It will be interesting to see if she competes on both the track and in the ITT for the Olympics - but I'll definitely be cheering her on. 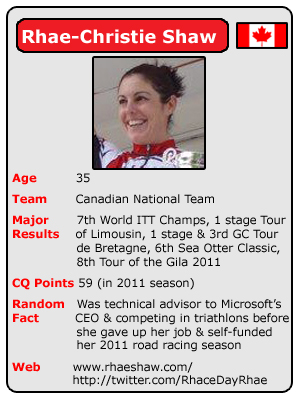 You might think that 4th and 5th in the World ITT Champs was enough for any nation, but the Canadians didn't stop there...  Also on their team, and finishing in 7th place was Canada's answer to Evelyn Stevens - Rhae-Christie Shaw.

So why the Evie Stevens comparison?  Well, check this out, from a profile on her on CyclingNews:

Shaw's path from triathlete to contender for London started at age 35 when she made the decision to quit her job of 12 years as a technical advisor to the CEO of Microsoft and take up racing her bike full time this season - a decision that came after eight years of racing Ironman triathlons to the point that the sport no longer was enticing.

Yes, that's hardcore!  She self-funded her season, coming 6th in the Sea Otter Classic and 8th in the Tour of the Gila,  with RED Racing and was taken to Europe by the Canadian National Team, where she won two stages of the Tour de Bretagne, to come third overall, and the ITT stage of the Tour of Limousin - and even though she broke her hand in a crash in Limousin, she hasn't been put off, and has big plans for 2012 - that CN article reports that she's signed for Exergy 2012 (formerly Peanut Butter & Co 2012) where she'll be riding alongside and learning from former World & Olympic ITT Champion Kristin Armstrong.

For more about her, here's a video interview with her on coming third at this year's Canadian National ITT Champs, a triathlon profile of her, that talks about her childhood on a cattle farm and her poker prowess, and here's a great blog post with photos from the man who claims her success is all down to him (I LOVE the pic of her riding in a cape!)...  I'm sure we'll be hearing much more about her in the very near future! 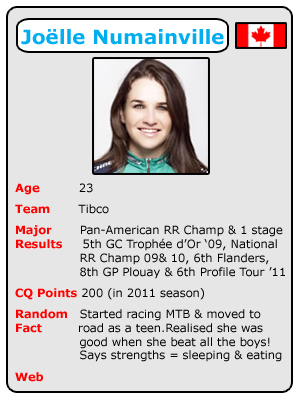 A lot of the Canadian riders race in the USA, and Tara Whitten is one of three Canadians signed to Tibco for 2011 - French-speaking Joëlle Numainville is the only non-Anglophone on the team.  Numainville has been racing since she was a child, starting on the mountain bike and moving to the road as a teenager.  She said she started racing for fun, and "realized I was pretty good when I started beating all the boys in the neighborhoods", which is always fun!

Like Whitten, Numainville spent last winter in California at the track training base - and she's another rider who'd love to add a World and Olympic title to her 2009 Pan-American Road Race and 2010 Canadian National Champion jerseys,

Numainville's speciality is sprinting, although this year she came 6th in the Ronde van Vlaanderen, 8th in the hilly GP de Plouay, and 6th in the Profile Ladies Tour General Classification, including 9th on the final stage all over the Valkenberg climbs, so she's one of those sprinters who can get over the hills.  She rode for a season and a half for the French-based ESGL-GSD Gestion, but for the last few years she's ridden for teams based in the USA, and combines cycling with studying at university (her fellow-students, younger brother & mother send her lecture notes when she's away from home).  Off the bike, she says her strengths are eating and sleeping, which I'm sure a lot of Café readers can relate to! 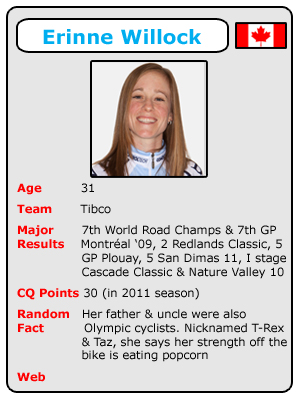 The third Canadian Tibco rider, Erinne Willock, is a different type of rider again - this time a climbing specialist, who's been racing for 15 years, professionally for 8.  And as you might expect, she's another formidable racer - superstar Ina-Yoko Teutenberg told Podium Insight that Willock is a rider to watch, and when Teute says that, it has to be true!

Willock comes from a cycling family - her father Martin rode the ITT in the 1984 Olympics, and her uncle Bernie was the 1980 Canadian Road Champion, and was picked to race in the 1980 Moscow Olympics, before Canada boycotted the Games over the Soviet invasion of Afghanistan.  Erinne herself started road racing at 14, in her High School league, and competed at the 1999 Junior Mountain bike World Championships, before switching exclusively to road.

Since then, she's been a consistently strong rider, winning big American stage races, and always doing well in international races - 7th in the 2009 road race World Championships, 12th in the 2008 Tour de l'Aude and this year coming 5th from the crazy-strong break group at the World Cup GP Plouay.

Nicknamed Taz and T-Rex by her family, she's currently completing a degree in Physical Education in the off-seasons, and says her off-the-bike strength is eating popcorn!  You can read more about her in this great Podium Insight interview from April - and here's a video interview with her from the Redlands Bicycle Classic, where she came second in the GC this year.

If that wasn't enough, here are some more talented Canadian riders to watch out for - Leah Kirchmann, who was 2nd in the USA National Racing Calendar and has a fabulous blog which you should all read, and Heather-Logan-Sprenger, who is another Canadian cyclist with a PhD, and is also a professional ice hockey player - both of whom, I hope, will be one of the riders with a contract for next year with the Kelly Benefits team that will rise from the ashes of the super-successful Colavita-Forno d'Asolo; and Karol-Ann Canuel and Julie Beveridge, who are both riding for French team Vienne Futuroscope. 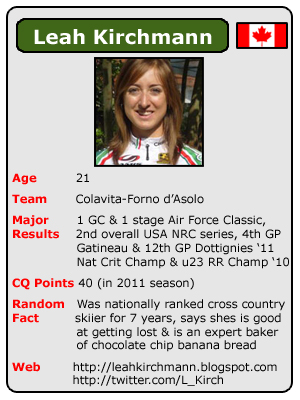 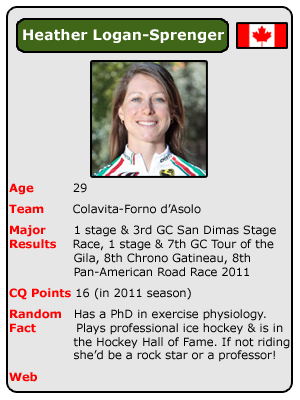 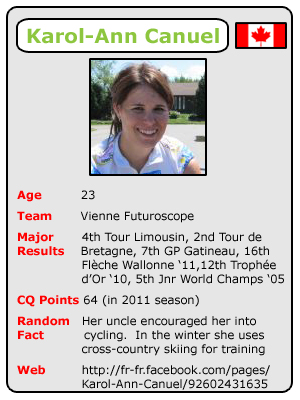 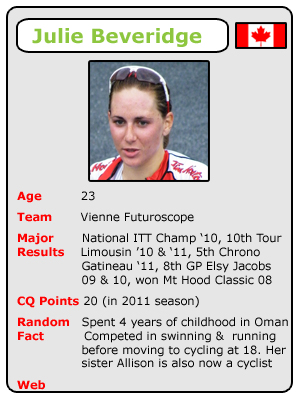 Wow, that's a LOT of riders!  and I know, I know, I should have mentioned Anne Samplonius, Denise Ramsden (read her blog!  I love her Living The Dream post!), Alison Testroete, who also blogs,  and probably a dozen others!  But you can help me out by including any information you have about her, these riders, or any other Canadians we should know about, in the comments below!