Share All sharing options for: 2011 in Review: Announcing the Podium Cafe Men's Awards!

Rider of the Year: Philippe Gilbert! 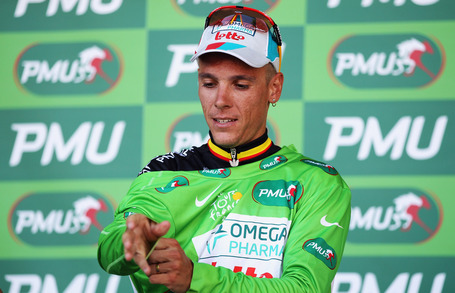 Gilbert accomplished things no other rider had ever done in his magical 2011 season. He became the second rider in history (and in all probability the first clean one) to run the table in the Ardennes, winning Amstel Gold, La Fleche Wallonne and Liege-Bastogne-Liege in succession. He won double national championships in Belgium, road race and time trial. He won a diverse array of classics like Strade Bianche and GP Plouay and GP Quebec. He came close in MSR and de Ronde. And for all that, he was awarded 100% of our rider of the year vote. Congrats Phil! We'll make our trophy very small so it can fit on your shelf. 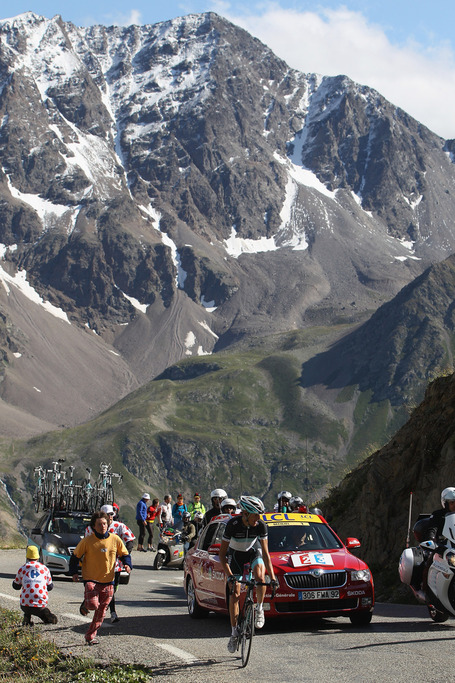 Andy Schleck may have disappointed his fans with a Tour de France that was long on heroics and short on an overall plan, but oh! those heroics! Schleck's attack took a Tour dogged by cautious riding and turned it into a throwback legend of a race. The Eagle of Luxembourg took off on the foreboding slopes of the Col d'Izoard, 60km from the finish, and stayed away, at times threatening to blow open the Tour. But behind him a pit bull of a rider named Cadel Evans, took responsibility for the race -- alone among the pack of "favorites" -- and chased down Schleck to limit his losses to two minutes, just 1:15 on GC, and as it turns out, well within striking distance of his own goal. One race. Two heroes. Three hours of watching with our hearts in our throats. Final poll results here.

Team of the Year 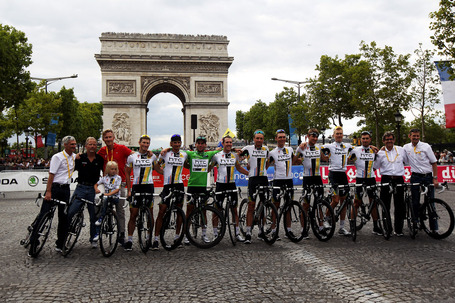 First in wins, first in your hearts. For five years nobody has dominated cycling like the Highroad Sports guys, most recently known as HTC-Highroad. The just-shuttered squad, born in Stuttgart as Stuttgart-Merckx-Gonsor in 1988, was a twenty-plus-year titan in the sport, evolving into the Deutsche Telekom/T-Mobile team that housed Tour de France winners Bjarne Riis and Jan Ullrich, tore itself down and reemerged as the American successor squad (Highroad, Columbia, HTC) that won so many races it evoked comparisons with Mapei. The last round traded in wins, not Grand Tours, but it did so with such consistency and with so many riders that at some point we all collectively stopped caring about their lack of yellow jerseys. The team got right after a transitional 2007 and dominated the victory chart for the last four seasons, averaging 70 victories a year, and topping out at 85 in their magical 2009 season. 2011 was in essence their worst year in the last four, and their 56 wins was first overall by a 23-win margin. Great teams win 30 times a year or so. For a team that averages more than double that figure, you start running out of adjectives. Adios HTC, and danke schoen for a great run. Final poll here. In typical fashion, it wasn't close.