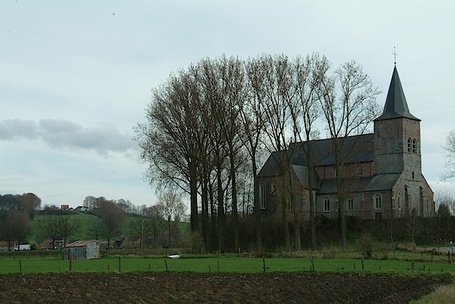 Yes, tomorrow morning, the cycling world returns to one of its more hallowed grounds, albeit with a change of tires and a slight alteration of the route. But if the Koppenbergcross differs from the road ascent that marks the business end of the Ronde van Vlaanderen, its similarities are not hard to feel. There's the mud. And the slippery cobbles. And the sheer madness of trying to do these things -- a brand of madness which makes me really really want to try to do these things. [Ideally with no cameras around.] In short, it's fun. Very fun. And that's before we start talking of frietes.

The race itself is significant as CX races go. Cross races all tend to have their one thing, and Koppenbergcross's one thing is climbing. Check out the profile (yeah, I know, but it's not worthless): 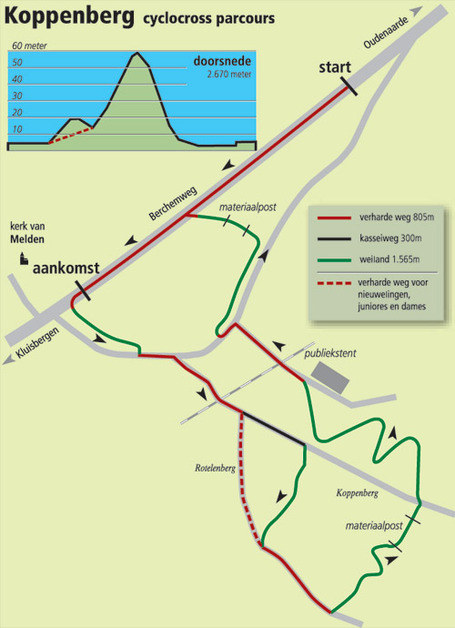 That's a pretty good bit of climbing per lap. The dotted line is where the newbies turn into the farmer's field, to avoid going up the Koppenberg. The men (and elite women??) start up the slope, getting to the 17% section (a/k/a the warmup ramp), then turning off before the gradient hits the mid-20s. I know, sacrilege, right? But the race continues up a parallel track to the ridgetop, so the climb is climbed. Also, consider how silly climbing the thing is once, with road tires (and a good deal less mud) -- my uninformed hunch is that using the whole road was tried and rejected. Nobody wants a CX race defined by a three-minute runup. The descent is madness too, and after a short loop it's time to go up again.

On the men's side, Sven Nys hasn't lost since back when the headlines were dominated by Lance and Sheryl. Bart Wellens won twice back in his early years, and I'm sure other guys in the Men's Elite ranks can give him a run for his money. Among the Women's Elite starters is defending winner Helen Wyman, and other former victors Pavla Havlikova and Daphny van den Brand. Both startlists are packed.

If you can't wait til All Saints Day, feast your eyes hither:

If this isn't your idea of fun, it's like I don't even know you anymore.