The Bicycle Book, by Bella Bathurst

Share All sharing options for: The Bicycle Book, by Bella Bathurst 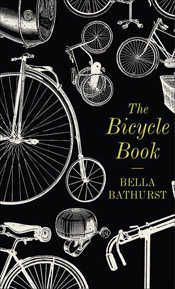 Title: The Bicycle Book
Author: Bella Bathurst
Publisher: HarperPress
Pages: 306
Year: 2011
Order: HarperCollins
What it is: A miscellany of cycling stories for fans of the two-wheeled form of transport.
Strengths: Wonderfully written and some great stories in it.
Weaknesses: It's scary sometimes to see how others perceive cycling.

Bella Bathurst's The Bicycle Book comes on the back of the resurgent popularity of cycling in the UK, the dividend from the Olympic gold diggers and payback for all the lottery money that has been poured into British Cycling in the pursuit of bangles and baubles at that quadrennial five-ring circus that will be pitching up in London next year. Cycling in the UK today is like Cool Britannia all over again, only with Blur and Damian Hirst being replaced by Team Sky and Chris Hoy. Step outside the summertime's in bloom ...

How do you begin describing a miscellany of cycling stories such as are contained in The Bicycle Book? Here's a cut-down take from Bathurst's intro to the book:

"I started writing this book because I wanted to read something good about cycling and bikes, and there didn't seem to be that much around." Bathurst - like a lot of cyclists - didn't find her fuse being fired by "route guides and sports science manuals and conspiracy theories poring over Lance Armstrong's doping record or biographies of individual heroes." So she did the sensible thing and wrote the book she wanted to read.

Of her own background, Bathurst tells us this:

"I ride a bicycle every day in London, I do as much mountain biking in Scotland as I can, I've done long tours abroad, I've taken part in sportives and audaxes, and that's it. [...] I'm not a cyclist because I hate cars or can't understand the pleasure of driving - I'm a cyclist because I reckon there is no lovelier form of transport."

The Bicycle Book then is a pick-and-mix "from all the available information on the basis of what I felt was interesting and useful." Bathurst acknowledges that her choices will please some and displease others: "That, I'm afraid, is an occupational hazard  of writing about a subject about which so many people feel so passionately about."

Bathurst has got stories of urban cyclists for whom the Earl's Court Cycle Show is retail heaven. Of Serious Men for whom the simple act of lifting up another cyclist's bike to test its weight is an act of mental arithmetic in which "weight = cost of materials = amount of money spent = devotion to the cycling cause." Cycling - at all levels, from commuter, to recreational rider through racers and beyond - is, in Bathurst's presentation of it, sado-masochistic, laced with machismo, typically for people suffering from Status Anxiety. And Bathurst - like a lot of us - is in love with it. Warts and all.

So what's inside Bathurst's pot-pourri of delights? Well there's a bit of frame-building, a bit of the history of the bike, there's trips to the Netherlands (relentlessly flat but a cycling Utopia) and India (a Dystopia in which the internal combustion engine is driving bikes off the road), a jaunt through the role the bike played in nineteenth century feminism, the bike at war, couriers, BMX bad-asses and knobbly-tyred mud-lovers ... basically a bit of most things two-wheeled.

There's also some stuff a little closer to home. A couple of weeks back I mentioned David Miller's dissing of Paul Kimmage over a 2006 article the Dubliner wrote for the Sunday Times about riding the Étape du Tour. Millar was a bit miffed about the way Kimmage criticised some of his fellow participants in the ride (he called them sad bastards), citing this as proof that he (Millar) loves cycling (and hence, I guess, us) more than Kimmage does. For The Bicycle Book Bathurst interviewed Kate Gallefant "a London Barrister who has ridden two Étapes and knows exactly what they're like." Here's how Gallefant describe climbing l'Alpe d'Huez on one of those Étapes:

"The guttering by the side of the road was just full of men lying there trying to cool down. People suffering the most terrible heat exhaustion, people having collapsed - you'd literally be riding behind someone and watch them wobble and fall to the side of the road. It was extraordinary - it was like a death march."

Bathurst asks Gallefant whether she thinks the Étape attracts a particular type of person:

"Definitely. Men. Out of 8,500 people, there are two hundred women every year, roughly. Which tells you a lot about the nature of those who want to do it. I think it attracts a lot of overachieving professionals - lots of bankers, lots of lawyers, lots of people who think they need to compress their leisure time into achievement. They like to be able to say, I've done this and I've done that, and the Étape is very good for that. [...] And you can spend a huge amount of money on it, that's the other attraction."

Which observation brings us around to the big buckle itself and road racing in general. Let's linger a little on Bathurst's take on racing:

"Racing has absolutely nothing at all to do with simplicity or joy. Racing, according to its followers and practitioners, is mainly about suffering. Suffering and, if you're lucky, death, thereby leading to immortality. Racing is about heroism in the face of appalling odds. It's about man or woman locked in mortal combat with the laws of physics. It's about flinging down a challenge to the mountains and the earth, conquering gravity, transcending environment. [...] It's about pain and humiliation, complexity and endurance, violence and self-punishment. If it's fun, you're doing it wrong."

The life of a racer is without pleasure or hope:

"If you're lucky and turn pro, you do so as a domestique (the literal translation of which, according to one French dictionary, is 'household waste'), shielding your team's star riders against 80mph winds or violent rivals, then moving aside just as the finish line comes into view. [...] You live like a monk and dope like a fiend. You tinker with the things that make you male or stuff yourself with more steroids than a village fête vegetable. [...] You submit to the indignities of the doping control officers who arrive demanding samples in the middle of the night, while your wife is in labour, or at your child's funeral. You get used to the fact that the media and thus the public assume that if you didn't win you're rubbish, and if you did you're doped."

Now I don't know about you, but I don't subscribe to that view of this sport. But what's really scary about it is that there's no denying that that is the way some people - many people - do view this sport. The question is, who's not seeing it right, them or me?

As well as the inevitable interview with Graeme Obree - inevitable because Bathurst seems to be painting a portrait of a very particular type of cyclist - there's also quite a revealing interview with Charly Wegelius, who turns out to be remarkably introspective for a guy giving interview just hours after completing the 2009 Tour de France.

That's not the end of the racing. In the section on couriers there's also a little bit of history of two very strange bike races from way back when, two curios which I'm going to have to find out more about: the Critérium des Porteurs de Journaux and the Triporteur's Race.

Both were early twentieth-century races in Paris. The former was for the guys who'd deliver bundles of newspapers from the printers and distributors to the newsagents, the latter for trike-mounted couriers who delivered freight cargo. As with modern alley-cat races, these races weren't strictly about getting from A to B and involved pick-ups and drop-offs along the route. They also, like most bike races, involved not a little bit of ... well, creative interpretation of the rules is the kindest way of putting it. (If you're curious about the Porteur races, check out BlackBirdSF.org.)

So then, what is one to make of The Bicycle Book? Taken individually, quite a few of its pieces make for interesting reading. For sure, you won't like everything but I'd be surprised if you came out of it not liking something. There's a good mix of topics and a good mix of styles throughout the book: straight reportage, the odd creative flight of fancy, Q&A interview (when you're talking to groups of cabbies and couriers, you really do have to quote em verbatim, the interplay between individuals is so much fun). And Bathurst writes with a fluency it's hard not to appreciate (as fans of her previous books - The Lighthouse Stevensons, Special and The Wreckers - will attest).

The problem - for me at least - comes when you take them all together. Bathurst presents a picture of cycling which, frankly, scares me. It's too dark, too weird, too depressng. There's a lot more to cycling than that. Isn't there?