Cafe Bookshelf: The Team That Changed Everything

Share All sharing options for: Cafe Bookshelf: The Team That Changed Everything 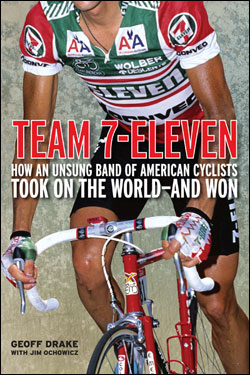 Title: Team 7-Eleven: How an Unsung Band of American Cyclists Took On the World -- And Won
Author: Geoff Drake (with Jim Ochowicz)
Publisher: Velo Press
Pages: 322
Year: 2011
Order: Voila!
What it is: The biography of a cycling team. A very unique cycling team.
Strengths: Very thoroughly researched; story goes deep inside a team whose heyday was 25 years ago.
Weaknesses: That closeness sometimes feels odd for a journalistic work.

Longtime Cafe readers have noticed the change in how we do book reviews here. FMK has supplanted me as our reader-and-rater-in-chief, for a variety of reasons, including the fact that he does so much more with the Cycling Bookshelf than I ever did. But this once, I had to grab the pen. This one was too close to home.

The book at issue is the biography of Team 7-Eleven, the team whose accomplishments are many and varied, but who will always be known first and foremost for its existence, sort of the way most people can't rattle off Jackie Robinson's batting statistics but everyone in America can tell you who he was.

American Cycling fans from the 1980s often talk of the "LeMond Era" and scores of us will be glad to tell you how Greg LeMond inspired us to buy a bike, even race it. LeMond is rightly considered one of the all-time great cyclists, and the fact that he came from the United States made his story all that much more compelling at the time. But Greg LeMond didn't change American Cycling the way Team 7-Eleven did.

On July 5, 1986, the Tour de France rolled out en masse from the outskirts of Paris for its first proper stage, following the previous day's prologue, where a young Canadian named Alex Stieda had the dubious honor of inaugurating the 73rd Tour de France by rolling out of the starthouse first... because he wore the last number on the lowest-ranked team, a motley crew of North Americans racing for Team 7-Eleven. The squad earned a miidly surprising, last-second invitation to the Tour on the strength of a performance at the 1985 Giro d'Italia, where they notched two stage wins (including Andy Hampsten's win to Gran Paradiso, which you can -- nay, must -- watch here). Security scares following US military action against Libya forced the team to skip the '86 Vuelta -- then run in early May -- so the team arrived on the biggest stage of the world with scant experience in European cycling. But they weren't naive:

To get the lead, "You have to do a good prologue. Then you have to have the opportunity to get a little time. If the combination works out, you get the jersey."

So said team manager Jim Ochowicz to Stieda, who had indeed done a good prologue, 21st overall and only 12 seconds off the winning ride. Stieda slipped into the day's breakaway on stage 1, and back then the breakaways stood a decent chance of hanging on. Mindful of this, and paired with riders who sat behind him in the standings, Stieda won some time bonuses in intermediate sprints, and when the peloton failed to narrow the gap to allow Belgian classics star Eric Vanderaerden to seize yellow, it fell on Stieda's shoulders. As did others -- by the time the podium presentations were through, Stieda held five different jerseys, including white, polka dots, and the since-discontinued multi-patterned combined and red sprinters' jerseys. As did the glaring spotlight of the international cycling press.

Unfortunately the Tour ran a split stage that day, with the team time trial in the afternoon. Exhausted from a breakaway effort in his first ever Tour stage (really, can you imagine?), Stieda got dropped -- in the maillot jaune -- and the team's glaring inexperience made for a truly embarrassing day, even by TTT standards. This day was Team 7-Eleven v1.0 in a nutshell: strong, fearless, utterly overlooked, and prone to straying out of its depth. 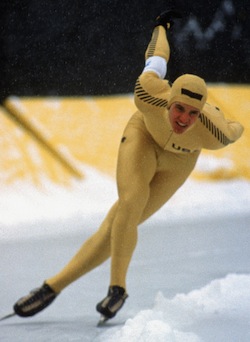 The book catalogues every episode, from the colorful characters to the shocking successes, in a methodical chronology of the team's decade-long run, with a special emphasis on describing its unusual roots in the 1970s "blade-and-bikes" world of speedskating and track cycling, and its critical first few tours of Europe where the effects of an American team in Europe were most acutely felt. Apart from the races, the story of Jim Ochowicz and the Southland Corporation are not to be missed. Ochowicz, currently the president of Team BMC, went from blades to bikes to working construction to coaching Eric Heiden en route to his gold medal run at the Lake Placid Winter Olympics -- not that Heiden needed much coaching. From there, the driven Ochowicz decided to run a team, and with Heiden -- a major star and restless for competition -- practically fell into an ideal sponsorship that would turn their magic bean of an idea into a beanstalk that grew all the way to the sky.

This is the part that stands out from, say, a book about the Mapei run. European cycling powerhouses didn't come from nowhere in the 1980s, but America truly was nowhere as far as the sport was concerned in 1980. The domestic road scene existed but had only scant contacts with its European counterpart. The 1984 Olympics -- my first memory of American cycling -- raised a few eyebrows at home (and provided critical momentum to Ochowicz, with 7-Eleven having sponsored construction of the Olympic velodrome). By 1985 you could watch CBS and see Greg LeMond at Paris-Roubaix and the Tour, and no question his story captivated me and plenty of others. But LeMond was one guy, and was always a great cyclist in the traditional manner (more or less) who happened to be American. Yes, he eschewed numerous traditions like bringing his wife along and eating burritos, but he raced for Guimard and Hinault in two classic French programs. 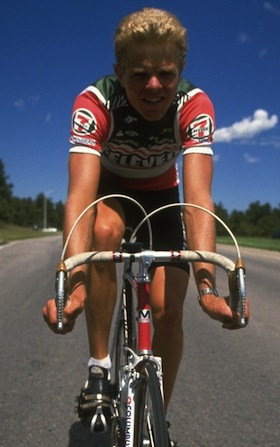 If LeMond made an American dent in the European scene, 7-Eleven's appearance was like a bomb going off. Personally I found their presence at the Tour in 1986 almost impossible to wrap my head around. They were consummate outsiders thrust into the clubbiest club -- laughing and joking and showing little awareness of what they were getting into. Could they keep up? Would they bring down the peloton? Would they command and/or receive any respect? The end results ranged from my country gaining a huge foothold in my distant favorite sport, or having our national reputation demolished for generations to come. As massive as the unfolding LeMond drama was in the 1986 Tour, seeing the 7-Elevens in the race, in yellow, in the hunt for stages, gave that entire month an edge-of-your-seat dramatic tension that defies description. The revolution was being televised.

It's all there in the book -- all the regulars, the forgotten pioneers like Greg Demgen and Danny Van Haute to the bigger names like Bob Roll, Jeff Pierce and Ron Kiefel, to the stars like Davis Phinney, Andy Hampsten, and Steve Bauer. The author, Drake, constructs the book from a mix of his own first-hand memories -- covering and even riding with the guys back in their heyday when Drake was an editor at Bicycling and VeloNews -- and exhaustive interviews staged over about four years. It's the painstaking cataloguing the story needs, because we know already that Hampsten won the Giro, and because there are to this day a million ways for a cycling team to fail. That Ochowicz got them to the startline intact and functioning is a minor miracle built on a myriad of contributions, from riders to mechanics to organizers behind the scenes, like Mike Neel and the Hoonved Corporation. The culture and business model they created changed the sport of cycling to this day. That they succeeded on the road too... well, that's the cherry on top.

As I said above, my main criticism with the book is a (minor) concern that it reads more like an insider's autobiography than something more objective. Ochowicz is listed as "with" Drake so maybe that's a better way of looking at the project. But the solution is to take the book for what it is, not to give it a miss. The story of this team is too important for any curious fan to overlook.

Stay tuned for interviews with Jim Ochowicz and Geoff Drake.