Share All sharing options for: Top Trumps 14: Rising stars of 2011

It's been a while since I broke out the Top Trumps, but looking at the final results of the Virtual Directeur Sportif competition has inspired me to think about the riders who have really taken a step up this season.  These are the riders who have had the potential, and maybe have moved to a big team, or ridden a full European season this year - or have just "clicked" - and had a big step up in their results. And if you were a Virtual DS, and picked one of them for 1 or 2 points, you should be p 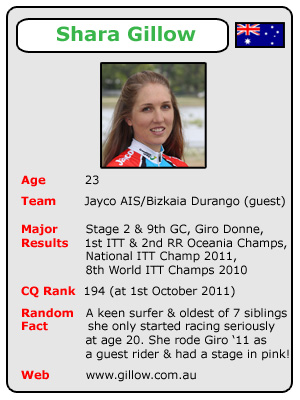 atting yourself on the back at your perspicacity and talent...  just as their real-life DSs should be!

The team manager who should be really smug is Bizakaia Durango's Jon Elorriaga Dunabeitia.  There was so much demand for places in the only women's Grand Tour of 2011, the Giro Donne, that the Australian National Team didn't get a spot, and Bizkaia used this to their advantage, with hurried Aussie signings that certainly paid off - Ruth Corset, who came 3rd on stage 8 and 6th in General Classification, and Shara Gillow, who came 9th overall after winning stage 2 from a killer breakaway, and who was the only rider who got to wear the pink jersey of race leader, apart from superstar Marianne Vos.

The signs that Gillow is a rider to look out for were all there.  She came 16th in the 2010 Giro Donne, and 8th in the ITT World Championships, and before the European season started, had put down the markers for what was to come.  At the start of 2011 she became Australian National ITT Champion, and then in March won both the road race and ITT in the  Oceania Championships.  After her spectacularGiro Donne performance, she came third in the Thüringen Rundfahrt GC, and had top 10 finishes in the Memorial Davide Fardelli and Chrono Champenois ITTs.  If it hadn't been for the fact she was one of the riders most affected by the rain in the ITT Worlds, I'm sure she would have done better than her 12th place - but then again, 12th is still VERY good!

All this, and she came relatively late to cycling, preferring the life of Aussie surfer girl as a teen.  But cycling is in her blood - her father, David, rode in the 1980 Olympics for Zimbabwe - and although Shara had ridden the occasional race, in 2008 she started to race properly.  The following year she was offered a cycling scholarship through the Queensland Academy of Sports, and that lead to two months in Europe with the Australian Institute of Sports.

Off the bike, she's the oldest of seven siblings, and still loves to surf - and if I were GreenEdge, or any other team for that matter, I'd be doing all I could to sign her!  You can see her talk in real life, just before the Worlds, here. 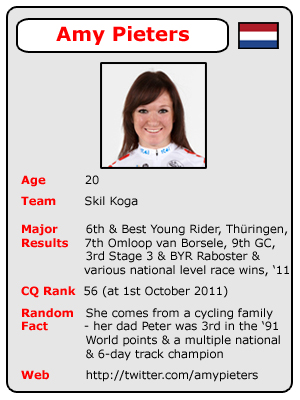 Continuing the theme of cycling families, Amy Pieters has some serious pedigree that, at 20 years old, she's already living up to.  Her father Peter was a national, 6-day, European and World Cup champion on the track, winning bronze medal in the 1991 World Track Champs points, and on the road won the 1988 Paris-Tours, as well as having 2 second places on stages of the Vuelta España (see more of his palmares on CyclingArchives).  His brother Sjaak and son Roy followed him into cycling, but it's Amy who looks most likely to follow in his footsteps.

As a junior and a novice, she won pretty much every national title on the track - and bear in mind, the Dutch Nationals are hugely competitive - and in 2008 and 2009 came third in the junior Omloop van Borsele stage race, also winning a stage in '09.  She rode for Merida in 2010, and this year rode for the small Dutch team Skil Koga, where she came 7th in the Omloop van Borsele, was Best Young Rider in Raboster Zeeuwsche Eilanden (finishing 9th overall) and in the Thüringen Rundfahrt, where she came 6th overall.  On top of this, she's won three national-level races, and podiumed on more.  Expect to see her aiming for a spot on the Dutch Olympic track team - and I wouldn't be suprised if she ends up on a bigger team again for 2012...  Succes Amy! 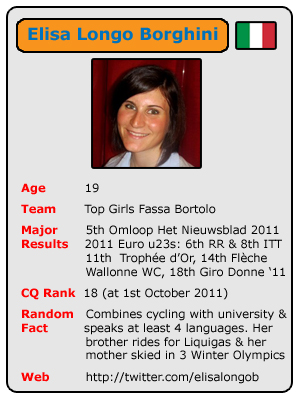 Yet another 2011 rider with a family history of cycling and the Olympics is Italian Elisa Long Borghini, whose older brother Paolo has been riding at Liquigas for Ivan Basso.  Their father, Ferdinando, was a cyclist and their mother, Guidina Dal Sasso, was a cross-country skier who competed in the Winter Olympics three times.

This year, she had her first professional season, riding for Top Girls Fassa Bortolo, usually as a domestique for Elena Berlato, and came 5th in the VERY wet and difficult Omloop Het Nieuwsblad and had top 25 finishes in most of the World Cup races, and top 20 GC results in big stage races like the Giro Donne (18th), Trophée d'Or (11th), Giro del Trentino (12th), Emakumeen Bira (17th) and Profile Ladies Tour (19th) - interestingly doing well in both hilly and flat races.  Her best results were coming 6th in the Road Race and 8th in the ITT at the European u23 Championships - and she was very active in the final stages of the World Road Race, tiring out the opposition to help Giorgia Bronzini take the World Champion title. Bearing in mind she's still only 19, this is a superb first season!

Nicknamed Lambo, short for Lamborghini, she combines cycling with studying for a degree in Communication Sciences at l'Università dell'Insubria in Varese.  As well as her native Italian, she speaks English, German and French, and says that if she hadn't become a cyclist, she would have studied Linguistics and Asian Languages.  There's a superb interview with her on Cicloweb, where, amongst other things, she says her ideal race to win would be the Flèche Wallonne, and her heroes are her brother Paolo, and the Marxist philosopher and political activist, Rosa Luxembourg.  She also talks about how much she admires Swedish star Emma Johansson, so she must be super-happy to be signed to Johansson's team Hitec Products UCK for 2012 - here's to her continuing onwards and upwards! 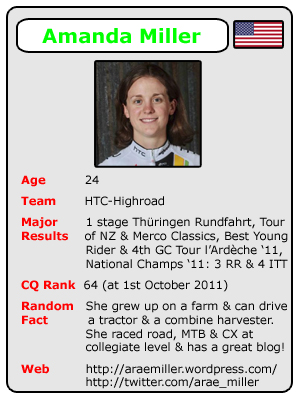 After all of those riders from cycling families, we turn to a rider who's discovered the sport all by herself!  Amanda Miller is an Iowa farmgirl, who can drive a tractor and a combine harvester, and puts fly fishing as one of her interests on her twitter profile.  She started cycling to train for High School basketball, and got into racing through a job in a local bike shop - this lead to collegiate cycling at Colorado State University, where she competed on the road, mountain-bike and in cyclocross - coming 2nd in the Collegiate CX Champs & 3rd in the MTB collegiate champs in 2008.  In 2009 she rode for Lipsmackers, with a place on the USA National Team in European races, and in 2010 signed to Tibco, winning the Sea Otter Crit and a stage of the Tulsa Tough and riding in Europe again for Tibco and Team USA, where she supported Mara Abbott to her Giro Donne win, but unfortunately crashed on the Stelvio Stage and couldn't complete the race.

In 2011 she rode in the super-strong HTC-Highroad team, where she rode in the USA races (winning a stage in the Merco Cycling Classic and coming 2nd in the San Dimas Stage race) and then moved to Europe as part of the all-conquering Team Time Trial squad, mountain domestique and breakaway rider.  Her 3rd place in the USA National Road Race was followed by a 19th place in the Giro Donne - and then by winning Stage 3 in the Thüringen Rundfahrt and 4th in the GC and Best Young Rider in the Tour de l'Ardèche.  It's been a great season - and she's definitely one of the riders we love, as she's blogged and tweeted her way through the season, giving us an insight into life as a pro - but we know she won't be joining her HTC team-mates in Specialized lululemon - it'll be interesting to see what happens to her next! 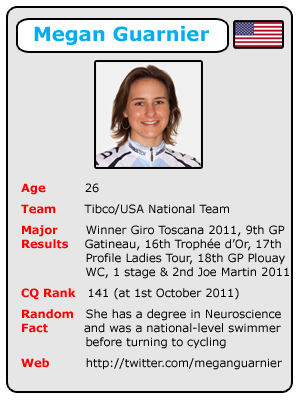 Another American rider who has made her mark in the European peloton is Megan Guarnier, also known as Mega, who apparently will gnaw your face off!  Like many of the women's peloton, she's highly educated, graduating with a degree in Neuroscience from the prestigious Middlebury College.  At high school she competed in swimming at a national level, and has been cycling for five years, riding the French races with Bourgogne Cyclisme Féminin and the big races with Team USA in 2009, before signing with Tibco To The Top for 2010 and 2011.  This kind of set-up is great for the USA riders, as they race the USA domestic circuit and get to experience the European peloton - and it clearly paid off for Guarnier, who won Most Agressive Rider on Stage 1 of the EnergieWacht Tour, went back to the USA, and then came back to Europe for a great late-season, building from 16th overall in the Trophée d'Or, 18th in the GP de Plouay World Cup and 17th in the Profile Ladies Tour...  to racing the last stage race of the season, the Giro di Toscana, where she finished three stages on the podium, and won the overall General Classification.  This was a superb result, and it makes me wonder what's next for her... 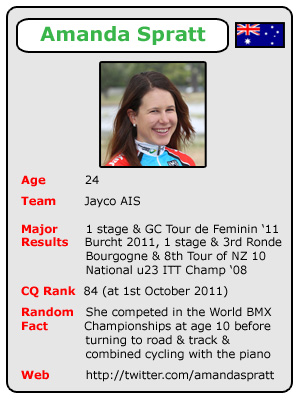 And finally, finishing where I started, with an Australian rider.  Amanda Spratt, aka Spratty, aka the Penrith Pocket Rocket, comes from a cycling family, following her father and brother into cycling.  She started racing BMX, competing in the World Champs at age 10, before moving to the road and track, where she combined lots of early track success with coming 3rd in the Junior World ITT Championships in 2004.  All was looking good until a big crash in the 2008 Tour de l'Aude kept her off the bike for two years - but she was finally able to come back last year, riding for the Jayco AIS Australian National Team in Europe.  It's probably not right to call her a break-through rider, as last year she was 8th in the Tour of New Zealand, 11th in the Route de France, 16th in the Trofeo Binda World Cup and won a stage and came 3rd overall in the Ronde de Bourgogne Féminine...  but I feel like this year she's stepped up again, riding with Shara Gillow as part of the Australian Team Time Trial squad that came 2nd in the City Trophy Elsy Jacobs & 4th in the World Cup Open de Suède Vårgårda and winning the Belgian national-level Burcht and then when Team Australia didn't get an invite to the Giro Donne, won the first stage and the General Classification of the Czech stage race Tour de Feminin (aka O Krásná Lípa).

You can generally spot her in the peloton by her huge grin (I don't think I've ever seen a photo of her where she's not riding-and-smiling) - here's hoping all her injuries are behind her, now, and she can continue moving on up!

Up next in Top Trumps - the riders we missed, who you couldn't pick for the Virtual Directeur Sportif game, because no one put them on the list - and after that I pay homage to the country that always shines in the World Championships...  O Canada!  And as always, any 1-or-2 point riders I should have mentioned, or anything fun you know about these riders....  add it to the comments!