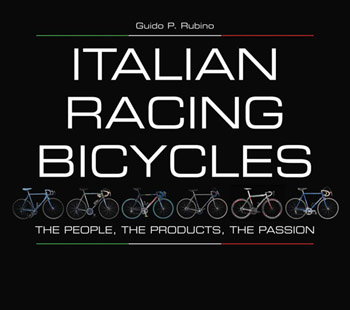 Title: Italian Racing Bicycles: The People, The Products, The Passion
Author: Guido P Rubino (translated by Jay Hyams)
Publisher: VeloPress
Year: 2011
Pages: 175
Order: VeloPress
What it is: A brisk ride through the history and the highlights of 40 historic Italian bike brands.
Strengths: As well as the obvious - Campag, Colnago, Columbus - Rubino also finds time for some lesser known brands.
Weaknesses: The usual issue with books of this sort: so much to say, so little space to say it in.

For a certain class of cycling fan, the word bike means a Colnago frame made with Columbus tubing, Cinelli handlbars, a Selle Royal saddle and a groupset from Campagnolo. Italians just have that cool thing going on with bikes that no one else quite matches. Other bike manufacturers have attained the status of cool by association with certain riders, or types of rider, but Italian bikes are born cool, they imbue coolness on the people who ride them. Or so a certain type of cycling fan thinks anyway.

The trick with Italian bikes and bike kits is that, generally speaking, they offer the perfect mix of form and function, kit that works but is also visually pleasing. Well, visually pleasing and mostly works. Most of the time. Some of the time though you do get something that's drop dead beautiful but just not very effecient. Like those Campag C Record Delta brakes that were so, so, so cool when they came out. Unfortunatley though, if you were whooring down a hill and needed to come to a sudden stop, you didn't want to be relying them. But by God they looked nice, even when you were stretched out in a ditch wondering why you'd spent so much money on a set of brakes that didn't work. 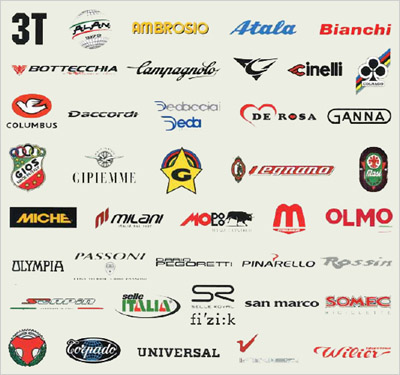 Well, in my reading, he did pretty well, finding a balance between the history of a company, the racing history of the brand, and some technical information. Much of the technical stuff is imparted through the photographs, with cables that go over (rather than under) the bottom bracket - or travel through (rather than under) the crossbar - highlighted, to give an indication of how different manufacturers innovated. The photographs are pretty engaging. When I first got the book I thought I'd have a quick flick through it before getting on with something else. An hour later I was still flicking.

As you can imagine though, for me the real selling point is the racing history of each brand. Take the Hour. As you may have noticed, I've have a bit of an Hour thing going on this year, starting with Mile A Minute Murphy, and moving through Hutch and Obree's Hour books. Don't ask me what it is, cause I don't know. But with three different Hour bikes in Italian Racing Bicycles this was something that was bound to catch my eye.

The first bike is Merckx's 1972 ride, a collaboration between that Holy Trinity of the Italian bicycle industry, Colnago, Columbus and Campagnolo (plus a few others for bits and bobs). One of the things I love about the Merckx bike is the drilled components. Personally, this was something I never understood (Hello, aerodynamics? Hello, structural integrity?) but Merckx's drilled Regina chain just seemed to encourage a whole generation to take a Black & Decker to their bikes. Madness.

Jump forward and there's that carbon monocoque Pinarello built for Induráin's ride. I have to confess to actually loving that bike, it just looked so perfect. In between those two is the Moser bikes, designed by CONI's Prof dal Monte. One of the great things about Rubino's spiel here is he has a photo of Dal Monte's original design for the bike, plus another pic of Moser, his Hour bike, and El Pappa himself, Pope John Paul II. Those Popes they had some crazy cycling icons.

One of the great things about Dal Monte's design for Moser's bike is how counterintuitive it was. Cycling was going light weight at the time, moving away from steel in the quest for ever lighter materials. But while Merck's bike weighed in at 5.75 kilograms, Dal Monte figured that actually increasing the weight was the way to go (what you lose in take-off speed you gain in less energy wasted through using a more rigid frame). The really funny part of the story, which I had not known before, was how Dal Monte convinced the UCI that his disc wheels complied with the requirement that wheels must be spoked:

"A carbon wheel is composed of an infinity of filaments of fiber that can be taken as spokes. Those who checked for conformity to the regulations were not thinking of the aerodynamic advantage of the wheels, only of the number of spokes. And this was not a matter of an aerodynamic addition but something structural, for which reasons it met the regulations without problems."

One of the sad parts of Italian Racing Bicycles is seeing what's become of some iconic brands today. Take names like Atala, Bianchi or Legnano. They speak of a particular era in Italian cycling. Today, they're just brands in different company's portfolios, existing in some sort of half life, neither here nor there, names divorced from ther heritage, the cycling equivalent of those new novels commissioned by the estates of the like of Ian Fleming or Arthur Conan Doyle.

The flip side of this is the companies that have come along in more recent years. Take Pegoretti (who wouldn't take a Pegoretti, given half the chance?). After years of having been a gun for hire to the best riders in the peloton, badging his frames with whatever brand 'officially' supplied that rider's bikes, Dario Pegoretti started putting his own name to his bikes in the 1990's. There's two things to note about Pegoretti: the first is the eye-catching paint-jobs he finishes his bikes in. The other is his love for cold steel:

"Stanless steel is lke titanium, but I think it's much better. The only problem is price. The material itself is not costly - it's still only steel - but, like titanium, it is complicated to work because of plastic deformation and requires much more time. The more time used, the higher the price."

A month or so ago, I probably would have yawned at the thought of a book like Italian Racing Bicycles and dismissed it as being merely for techs-mechs gear fetishists (or dismissed myself as never actually having made the grade as a gear fetishist). I still can't see myself wanting to spend a Saturday afternoon gear-fondling in somewhere like Evans, but I have begun to appreciate that there's a little bit more to bikes than a load of tubes stuck together and given a slap of paint. Between Cyclepedia, It's All About The Bike and - especially - Rubino's Italian Racing Bicycles, I have finally begun to have some appreciation for an aspect of this sport that has, up until now, passed me by. If a book can do that for someone like me, well it must have something going for it, no? Chapeau M Rubino.