The Belgian Hammer, by Daniel Lee

Share All sharing options for: The Belgian Hammer, by Daniel Lee 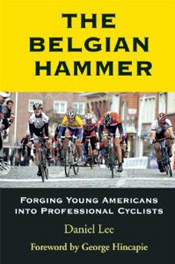 Title: The Belgian Hammer - Forging Young Americans Into Professional Cyclists
Author: Daniel Lee (foreword by George Hincapie)
Publisher: Breakaway Books
Year: 2011
Pages: 208
Order: Breakaway Books
What it is: The story of the young Americans, the next generation of US cyclists, men and women. Not so much the story of who they are, more of how they're transitioning from riding domestic US races to picking up the culture of the European cycling scene.
Strengths: Good, solid, well written reportage that tries to understand an explain where the next generation of American cyclists - men and women - will come from, and along the way asks questions as to whther this is really how things should be done
Weaknesses: It's an American book for an American audience and Lee's exclusive focus on America and Americans does mean the book is only telling part of the story. There are lessons Lee could have drawn from how other nations do things, and in doing so expanded his focus. And, in the long run, his audience.

One day Daniel Lee - a reporter from Indiana who had raced briefly as an amateur in Belgium - decided he wanted to tell a story not about cycling's past but about its future. So in the Spring of 2010, he set out in search of his story:

"I had come to Belgium from my home in Indiana in search of the soul of cycling: one writer's quest to discover what it takes for young Americans to make it in European professional cycling; what it takes to chase Tour de France dreams."

USA Cycling has an official presence it Belgium, its Belgian House in Izegem. First run by the former 7-Eleven directeur sportif Noël Dejonckheere (he left in 2009/2010, to be reunited with Jim Ocowicz, this time at BMC) it's still serving as a way-station for young Americans - guys mostly, the girls get to got to Italy to do their thing - who want to see if they had the right stuff and can cut the Continental mustard. The former Cervélo DS Marcello Albasini is now in overall control of it.

During Lee's visit to Izegem, the likes of Cole House Daniel Holloway, Ben King, Taylor Phinney and Peter Stetina were passing through the Belgian House. In the dozen years it's been in existence Izegem has played a role - how much will always be argued - in getting thirty-three Americans tickets to the big league: gigs with Pro or Pro Conti squads. Dave Zabriskie's been through Izegem. Tyler Farrar's been through Izegem. Brent Bookwalter's been through Izegem. Other alumini include Steven Cozza and Craig Lewis.

Izegem offers the young Americans a couple of different things. The most obvious is a diet of hard racing. But it also serves other purposes. Here's Farrar's take on its value:

"You come over; you get exposed to the racing over here. But you're living in a house full of Americans. It's pretty easy. They take care of you. You're not worryinmg about all that other stuff. It gets your foot in the door. You kind of get familiar with the way it works. It makes it easier to make the next step as a professional living on your own over here."

Lee himself was once a young American, back before the Belgian House in Izegem opened. A twenty-three-year-old amateur discovering for himself the difference between racing in the States and racing in Europe. A part of what he's trying to do in The Belgian Hammer is understand what it is that seperates those who can from those who can't. Lee's not so much looking at physical abilitty and mental fortitude (though, needless to say, both are considered), he's also looking at what's n place to stop good riders falling through the cracks. He considers the different hurdles - language, distance, love, college, all that stuff - that get in the way of cycling. He considers the different advantages some riders have, the support structures that surround them, particularly parents who either know or get the sport. Ultimately what he's looking for is the system that'll take kids with talent and dreams and turn them into adults with contracts and results.

Cycling does have such a structure, a path from amateur kid to pro adult, with Pro and Pro Conti teams able to use Continental squads - the old third division - as development squads. But in the US those Continental squads are top o' the heap. The Pro and Pro Conti outfits are over in Europe, racing with the big boys. So in the States, Lee argues, the botom rung of the ladder is actually the top. Which means that the team structure needs to be supplemented somehow. And while USAC is doing something right with Izegem, the Belgian House is also part of the problem: once you pass twenty-three you're out and on your own. For sure, yes, in theory, you should have made it by then. But some take their time rising to the top.

Which is where places like the Cycling Centre in Oostkamp come into the equation. Run by Bernard Moerman - a former footballer - the Cycling Centre caters for riders who can afford to pay for their own cycling education. The attached team - Fuji Test Team - boasts riders from around the globe: Australia, Belgium, Canada, Finland, Malta and the States. At €1,000 a month - bed, board and bike races included - it's not cheap. But in return for their money Moerman's riders get put through the mill of the kermis calendar. The Cycling Centre has seen some successful riders. Jeff Louder, for instance.

Somewhat unusually - and quite refreshingly - The Belgian Hammer is not just about the boys. Lee takes time to talk to some of the young American women trying to make their way in the pro peloton. Back in the States, at the Philly Classic, Lee hooks up with Sinead Miller. Then nineteen and riding for Peanut Butter, Miller was slogging her butt off in the service of Shelley Olds and trying to frustrate Ina-Yoko Teutenberg. After four times up the Manayunk Wall Olds took the initiative too soon the finish and Teutenberg taught her a lesson in sprinting. But Miller had done her duty.

Miller is a product of Marian Univerisity and has been through the Belgian House in Izegem. Weeks after Philly she was helping Mara Abbot to victory in the Giro Donne. Lee's real interest in her though is neither the Giro nor Izegem, it's Marian University, located nearby to Indianapolis's Major Taylor Vélodrome. Marian is, in Lee's words, "a small Catholic school [...] that supports top cyclists with scholarships and flexible schedules." Lee is interested in highlighting two things here: the role places like Mariam can play by supporting cyclists; and the difference between the guys and the girls when it comes to getting a qualification.

The latter was something Lee had disccussed back in Izegem, where Taylor Phinney had explained his attitude to education:

"It [college] is the same thing as having a serious girlfriend [ - way too much work]. You can't focus on one thing or another ... I can always go back to school ... There's always books."

Miller on the other hand was, when Lee met her, majoring in math and chemistry and already thinking of a PhD or med scool. In part that difference in attitudes is down to the differences in career progression available in the two pelotons. As well as riding for Peanut Butter Miller was riding well, for peanuts. Phinney on the other hand was being fêted as the next big thing in American cycling.

"It sort of becomes a crash-and-burn or success-and-thrive phenomenon. And because we are such a big country with so much talent to be identified, there is little concern for the ones that crash and burn. The contrast is in the smaller European countries, where there is not an abundance of talent or riders to choose from. The federation must first identify talent and interest in women, and then develop it from a young age. So you see women racing from a very young age, and you see the progression year after year."

That brief mention by Olds of how things work in other countires is one of the few criticicisms I would level at The Belgian Hammer. Generally, the book is solid reportage, the sort of work Sam Abt would approve of (it comes as no surprise to learn that Lee is friends with Peter Nye, author of the seminal Hearts of Lions). But Lee could have done with broadening his horizons and considered what is happening in other nations, how others handle the task of forging their young into hardened pros.

That aside, The Belgian Hammer offers a take on cycling many other cycling writers eschew. Lee isn''t just bigging up the next generation of American riders, he's also looking at all the ways things can go wrong. Within a few months of interviewing her in Philly, Sinead Miller had picked up her third concussion in a year and was off the bike. Having experienced, even briefly, Belgan racing for himself, Lee brings somethng to the story that many other authors miss, an eye for what it takes to succeed but also how easy it is to fail. As tales of twenty-first century cycling go, The Belgian Hammer is well worth looking out for.