Share All sharing options for: Offseason Capsule: Katusha Have a Plan, Yes? 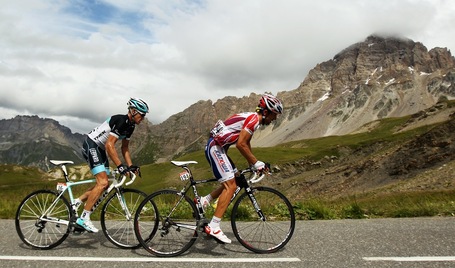 Katusha want to be a top team and will spare no expense. Katusha are the Russian global cycling project, and will get more Russian whenever possible. Katusha are reloading under new management and have packed the roster with young kids.

RIght? Some or all of these seemingly conflicting statements would describe the Russian Rockets. Alternatively, if it looks like they have several different plans, maybe they don't have one at all?

One thing is certain, they don't seem too intent on building a team that's fun to root for, at least not in the short term. As the kids come along, this could be a very interesting project indeed, but with the exception of Denis Galimzyanov, that may take time. For now, they are a team of grizzled veterans, foreigners, and the charming visage of Hans-Michael Holczer in the director's car.

Let's get this over with...

Honestly, if I thought of Katusha at all, it was leading up to the classics. Cuddles the Cobble put them 9th in the preseason power poll. It's also fair to say there was some wondering about Joaquim Rodriguez. Not that kind of wondering -- we're talking about El Purito here, right? -- but something more along the lines of "I can't believe what just happened" in 2010 when he finally freed himself of a life of servitude and rocketed up to #3 in the world. We knew he was better than allowed to show back at Caisse d'Epargne, but it wasn't clear exactly by how much. Oh, and there was plenty of morbid curiosity attached to Danilo DiLuca's return from yet another vacation.

An emerging sprinter, another impressive dose of Purito, and not much else. Leif Hoste was imported for Flanders, and it's not hard to imagine the old vet in the final dozen approaching Ninove, had he not crashed in Driedaagse de Panne and wrecked his face fitness. Pippo Pozzato also wasn't on form, and was on the outs with DS Andrei Tchmil -- a chicken-and-egg conundrum considering he nearly won Milano-Sanremo. Vlad Gusev was impressive at the E3 Prijs (3rd) and Luca Paolini rounded out a solid squad, but it all seemed to disintegrate.

Worse still was the Tour de France. Mikhail Ignatiev chased breakaways and got 5th on the stage to Gap. Galimzyanov was 4th in a bunch sprint on stage 11. Gusev took 24th on GC. If you're like me and you can't remember them even being at the Tour, well, there's a reason. And if you did remember, that's probably even worse, since Alexandr Kolobnev was the first and only rider kicked off the race for suspicious blood contents. It was cute that they sent an all-Russian squad, Russian cycling deserves it I suppose, but cultural victories are pretty hollow in the sports world if you can't back them up on the field of play.

They did succeed in launching Galimzyanov into the world of big-time sprinting, after a few years as Robbie McEwen's understudy, and the powerful 24-year-old from the Urals made steady progress with a couple minor wins early on, victory in Paris-Brussels, and a strong stage victory in Beijing. Pavel Brutt was OK as usual in small Italian races and scored points at the Tour de Romandie with a stage win.

But the real bright spot on the squad was a Spanish 1-2 punch of J-Rod and Dani Moreno, who combined to rack up solid placings in the Ardennes -- Purito was the best rider not named Gilbert, with seconds in Amstel and La Fleche -- then continued at the Giro where Rodriguez, again, hung with the Contadors and Scarponis on most days, taking fifth overall. Purito then absolutely stormed the Dauphine, taking two wins, a second place, and the points and mountains jerseys, begging the question why the hell wasn't he doing the Tour? Anyway, the roles changed hands somewhat at the Vuelta, where Moreno hung in to the end for ninth while Rodriguez faded after two early stage wins and a day in the lead. Then the two again teamed up on the fall classics, with Moreno winning in Piemonte, J-Rod third at Lombardia, and some other decent finishes. Makes you wonder what could have been if Kolobnev weren't on the shelf.

So what was the point? To build a crack team of Spanish climbers and then withhold them from the Tour? To build a Russian project with marginal threats to win? To own the Vuelta a Burgos?

Where do they go from here?

A fine question. Like I said, Galimzyanov was their most positive development... so they hire Oscar Freire? Maybe he serves as a mentor. Better him than new DS Holczer, last seen fleeing the burning sinking wreck of Gerolsteiner in a stream of bizarre press quotes. On the other hand, Katusha brought in Erik Zabel to advise on sprints, about as smart a hire as one could imagine, and not unrelated to the hiring of Holczer, who brought along Christian Henn, Zabel's old Telekom mate. So maybe there is a logic to it all?

Next, they finally convinced Russia's most decorated GC rider, Denis Menchov, to come home. Well, maybe bad luck convinced him: Geox's entirely predictable demise left Menchov without a team late in the transfer game. So even now it's more of a marriage of convenience, and there are pretty good questions regarding whether Menchov has much left in the tank. Last year was pretty uninspired, but then you can't blame him. In his last sane season he rode a stonking Tour, arguably his best stage race ever, and the 2012 course has to look inviting to the steady cronoman. He and Gusev should work well together, though I bet they wish there was a TTT this year.

Also coming along are more kids from the Itera-Katusha development team -- they run a pro conti, U23 and U21 team as part of their vertical integration of the Russian Global Cycling Project. I'm tasking Vlaanderen90 to give you the rundown between exams, but last I heard he was high on Timofey Kritskiy. Xavi Florencio and Simon Spilak are solid depth signings.

Gone is practically any hope in the classics. Hoste and Pozzato were forced out (along with Tchmil, for good measure), and Stijn Vandenbergh and Serguei Ivanov too. Gusev and Paolini are the plan, I suppose? Plus Freire in Gent-Wevelgem in MSR and Maxime Vantomme or Ignatiev on a flier somewhere. For all they got from their pricier classics team last year, you can't blame them for starting over.

Two years from now I will be interested in what Katusha are up to. Maybe we will look back on 2010-2012 as transition from a vanity project to a real program. Russia is a big country with oodles of talented athletes, and if they are gearing up for a coherent and patient push to promote the country's cycling, chances are good it will pay off before too long. Maybe it will start making sense -- a lot of sense -- by then.