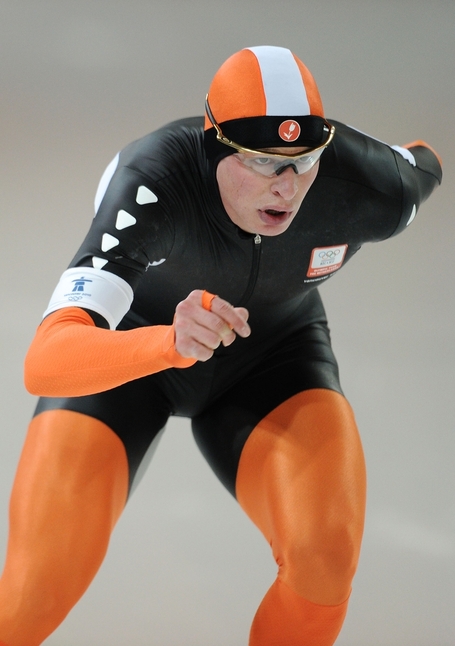 Telesport and others are reporting that Dutch speedskating hero Sven Kramer is about to launch his cycling career. He's signed up with a team from Groningen and is targeting Olympia's Tour -- not that they have an invitation yet, but it sounds like they are optimistic that Kramer's presence will make the nut. The media are a bit hazy on whether this is a full-time, permanent commitment, and if so what exactly he can do on a bike. I've seen pictures of him on his bike (thanks superTed) but that was just riding to skating practice. Beyond that... no idea.

Still, there is a long history of bikes-and-blades, dating back a century or so in the US and presumably other countries too. This was discussed in the 7-Eleven book, as much because of Eric Heiden's cycling career as Jim Ochowicz' speedskating background. I know little of speedskating other than it builds big thighs, and that the long events take 12+ minutes of sustained power output. But by all accounts the synergy is very real.

Kramer is one of the most successful speedskaters in modern history. He has a truckload of gold medals from everything but the Olympics (has one of them too, should have a second, and don't get ANYONE started on that). He's been a world champion since 2007, then age 20. Which makes him 25 at the moment, not an especially young age at which to start tacking on the road miles. His frame speaks of the classics -- 6' 1", 180 pounds -- and the nature of speedskating would probably back that up.

Oh, and this interest in cycling is not new, nor is the idea that he might be good at it. Kramer was second in the 2004 Dutch Champs' Junior Time Trial -- to Robert Gesink. He has a handful of wins to his credit in regional Dutch races, as recently as 2009. So power aside, the niceties of cycling -- like long days in the saddle and bike-handling -- may not be utterly mysterious to him. I'll start from a position of skepticism, particularly in light of his age, but this could be fun to watch. The Olympia's Tour is in late May.