When Can We Talk About German Cycling Again?

Share All sharing options for: When Can We Talk About German Cycling Again? 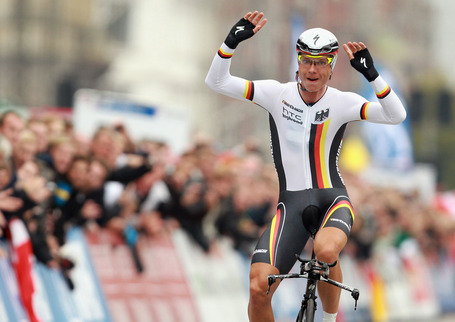 I don't like to wade into my own areas of ignorance more than necessary, but after perusing a piece at CN about the success of German cyclists, I have to ask -- when will Germany rejoin cycling's upper echelon?

In said article Rudolf Scharping, the head of the German national cycling federation, touts the worlds success of various German athletes (including the artistic cyclists, which is awesome), in some sort of argument that German cycling is recovering from its brush with death. Judging by its roster of talented and successful road cyclists, this is undeniable. On the women's side, German stars like Sarah Duester, Judith Arndt, Ina-Yoko Teutenberg, Claudia Hausler, and Trixi Worrack dot rosters of the big teams. The men's honor roll includes Panzerwagen, shown above, as well as the world's most convincing array of sprinters: Andre Greipel, Marcel Kittel, John Degenkolb and Andreas Kl Gerald Ciolek. ARD is broadcasting the Tour de France again, and presumably some other races (Vattenfall?). Supposedly enough time has passed for the fans to put T-Mobile and Gerolsteiner's ugly endings behind them, or so claims Herr Scharping.

So where are the German sponsors? When can we see a German team back in the World Tour?

Now, I am not arguing for any sort of national squad -- cycling teams at the top end are like mini UNs; even the government-sponsored projects hire outsiders. But cycling needs sponsors, badly, and Germany ranks as the biggest disappointment on the map in the combined means/interest ranking.

In terms of performance (and one would presume, interest?) Germany is a top... oh, six or seven? player in the sport (CQ has them fifth in points, third in wins). Among its peers in the rankings, Italy, Spain, France, the Netherlands, and Belgium all have multiple top-flight teams. Russia has a team. The US had four teams (two now). Australia has a team now, and most of the races take place in the middle of their night. Luxembourg, roughly the size of Lake Washington, has a team. NetApp, the top-ranked German team, finished just behind CCC-Polstat, meaning G-8 power Germany was outgunned by every one of its neighbors except Austria and the Czech Republic. All while German athletes were kicking ass abroad.

As to the means, I don't follow the economic news too closely, but even by today's (shabby) standards Germany is still an economic heavyweight, with its share of large corporations to whom a cycling sponsorship would count as a rounding error. I know there are scores of German sponsors in the sport, but nobody is going big. Nobody is making a statement that the country needs a team to compete at the top level (staffed by Germans or otherwise). Nobody in Germany is stepping up to ensure that their homegrown athletes are taken care of. Nobody in Germany has determined that they can gain... whatever sponsors get from the sport by appealing to the German public. The largest and wealthiest country in western Europe -- cycling's home region -- still seems like it's on the sidelines, while the UCI makes overtures in China and the Middle East.

I have to plead near-total ignorance here, as I don't read German media. So for those of you in Germany or more familiar with the chatter there about cycling, when is this going to change? What will it take? Help me out here.