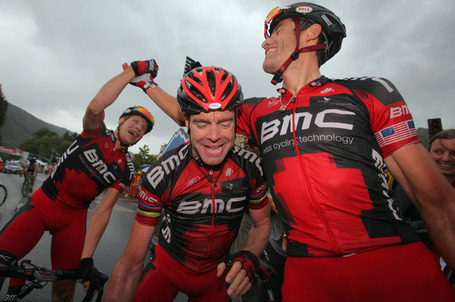 Today BMC Racing Team released their official 2012 roster. The squad, entering its second year as a Pro Team, has a lineup of 26 riders led by defending Tour de France Champion Cadel Evans and incoming stars Philippe Gilbert and Thor Hushovd. That is not to say that these are the only big names on the squad though - BMC's full roster has earned it the reputation of a "superteam" going into 2012.

In addition to its superstars, the team piloted again by Jim Ochowicz has beefed up its roster with major transfers Marco Pinotti, Tejay Van Garderen, and Stephen Cummings. Strong returning veterens (Manuel Quinziato and George Hincapie) and up and coming riders Taylor Phinney and Greg Van Avermaet help round out the squad that shold be competitive in most races it enters.

"We go into 2012 with an arsenal of riders who are competitive in any endeavor in professional cycling," Ochowicz said. "Our goals and objectives are realistic. We are not going to claim we will win this race or that race. But we should be competitive in every race we enter."

One of the story lines expected to pop up in the upcoming season is just how BMC will manage the overabundance of talent on its roster. Cadel Evans and Tejay Van Garderen will both target stage races, though there are many more of these to go around than there are Classics. The classics squad is extremely strong, with Philippe Gilbert, Thor Hushovd, Greg Van Avermaet, Alessandro Ballan, and George Hincapie all hoping to perform well in April. If the team rides together, they could execute a coup de grace like Garmin did in Paris Roubaix this year... but if individual ambitions aren't carefully managed, tensions may result.