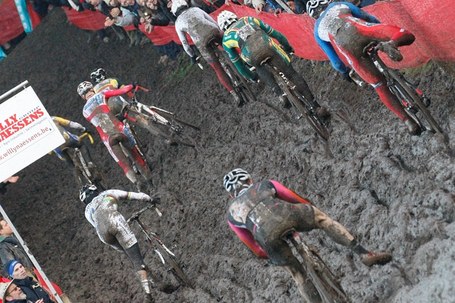 Well, happy holidays, but Jen already covered that. No, today's topic is different: the celebration of Cyclocross that comes every year in Belgium around Christmas and New Year's Day. The veritable avalanche of races to yuletide us over nearly into the Tour Down Under... if not quite to the CX worlds. Let's set the scene a bit.

Sven Nys, possibly the greatest crosser of all time, has done a seasonal version of his Hulk-it-up race strategy, propelling him from the pack to the top of the World Cup and Superprestige standings. He won the mudbath in Namen. He won the standalone Druivencross. He won the Scheldecross. He would have won in Essen -- which would have made for four wins in two weekends -- had a flat tire not slain his chances. Meanwhile, the previously dominant Kevin Pauwels finished fourth in Namen, sagging behind the returning Niels Albert (who matched Nys almost pedalstroke-for-pedalstroke) and Klaas Vantournout, who hadn't challenged Pauwels at all before the weekend. In short, Nys has flipped the script on Pauwels, and it is apparently up to Niels Albert to stop him.

[Update] Or not. Mario De Clercq is on Sporza telling peeps that K-Pow had a cold last weekend, as well as a poorly timed crash, but he should be aces again this week. Starting in Diegem, where he likes the climby bits.

Tomorrow is one of Belgium's gifts to west coast America*: a 7:30pm start time for a race that sloshes around a giant sand pit. [* As if we needed more gifts.] The start time has been rather hotly debated in the press, with riders complaining that they won't get home til midnight (coughHTFUcough). The problem stems from the fact that the normal Saturday early evening time is preempted by the fact that everyone wants to be home on Christmas Eve, so Friday it is, but the organizers don't want a 5pm start since the good people of Belgium need time to wrap up at work, find their spot, and grab a beer or three if they're going to make the race. Commence bitching... but the show must go on. Nys is calling it his "black beast," reflecting the fact that he has only won it four times.

As for the course, tgsgirl says:

Now this one is easy to recognise: Diegem is the race raced in the dark, under artificial floodlights. There is one big-ass sandpit turned into mud turned into gravel road and some hills. The race is partly in the field and partly in the forest; but the biggest challenge is the lack of natural light.

Here is Diegem at its best:

Nys will now don the white kit of WC leader, ripped from the mud-stained back of K-Pow last Sunday, and sometimes a jersey makes you the target. But it's Nys. There isn't a pro CX rider alive who doesn't make a note of what Sven is up to. Zolder, meanwhile, is known for its car racing track, and the worst road WC course ever. And true to form...

It's got long and straight stretches, which is very uncross-like. To make up for that they added hills and u-turns though, so that makes up for some. The race is in a pine forest, so it's a though surface with hills and tree roots and other such shenanigans.

So yeah, not a particularly inspiring course. But the riders make the race, and last year the guy who did so was none other than Lars Boom. The Large Bomb was a full four minutes off the pace last weekend as he conducts his annual exercise of dabbling in cross (the cause of much drooling north of Antwerp and west of Lake Washington), so don't look for a repeat of 2010. More likely, Albert will find the lack of challenging elements (including precipitation) will dull Nys's edge enough to give him an opening. Weather report says rain today and tomorrow, but sun over the weekend. Here's some goodness from last year's Boom-erang:

The party doesn't stop Monday. Azencross takes the scene to the Dutch border on Wednesday; then to Leuven on Friday; and finally it's the GP Sven Nys on New Year's Day. But we will hold off on details for now, see if the Hulk stays green through the next two rounds, and dive back in right after polishing off those Christmas leftovers early next week. Cheers!

Photo by Patrick Verhoest, not affiliated with Safety Joggers.