It's Belgium, it's the middle of winter, most people are recovering from a day of food, drink and family.... except for the cyclists, who are warming up for more cyclocross! I LOVE Belgium!

This is what gs had this to say about Zolder - and just look who won last year! Fans of The Hegemony, he'll be riding again today!

The World Cup race in Zolder is on and around the Zolder race circuit - which you may know as the battleground between the Germans and the Brits in Top Gear; or as the place where Super Mario became world champ. It's got long and straight stretches, which is very uncross-like. To make up for that they added hills and u-turns though, so that makes up for some. The race is in a pine forest, so it's a rough surface with hills and tree roots and other such shenanigans.

Links at cyclingfans, procycling & sports-livez - the coverage will start around half an hour before the race - and more about the race and what it means for the World Cup below the jump - and join us to chat through the race, and ask any questions at all, in the comments!

EDIT! And links to videos & photos at the bottom of the comments - if you find anything fun, please add it in too!

The race website has all kinds of fun information. Look at the variety of course maps from different years, for example! It's a circuit of just over 3km, with two pits, and looks kind of like this: 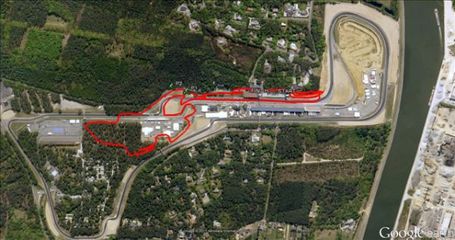 It's the 6th round of the World Cup - out of 8 in total (for the men - the women don't ride Igorre, so it's 5/7 for them) and the current standings look like this:

And the points for the top 50 to finish run like this:

and then at 1 point increments down to number 50 with 1 point - so it looks like a two-horse race between Kevin Pauwels aka K-Pow, Yoah) and Sven Nys (aka Hulk It, Sven!). Poor old Niels Albert is sitting at 14th, with 155 points, thanks to his annoying hand injury - but he'll still be wanting to win this, and everything else - and of course, the other big question will be can Styby get any kind of results?

For the women, their standings are:

Their points are for the first 30, and run

(My bet for the women is for Compton to win like last time - this, after all, a course that rewards POWER!!! but then again, Marianne Vos is on her usual sparkling form, and I always peg Vos for the win - can't wait to hear how those two duel!) EDIT! Compton, who won it last year, isn't racing, so I bet Vos, or Daphny vdB!

If you like to have a startlist alongside you, as you try to work out which muddy rider is the one at the front/having acrobatic crashes, here is it

And if you're waiting for it to start, here's the last lap from last year's men's race, when it was all snow & ice...